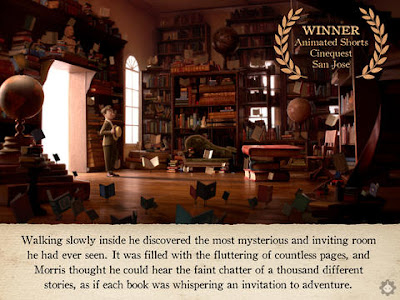 "The Fantastic Flying Books of Mr. Morris Lessmore, directed by William Joyce and Brandon Oldenburg is a poignant, humorous allegory about the curative powers of story.

Using a variety of techniques (miniatures, computer animation, 2D animation) William Joyce and Brandon Oldenburg present a hybrid style of animation that harkens back to silent films and Technicolor musicals." 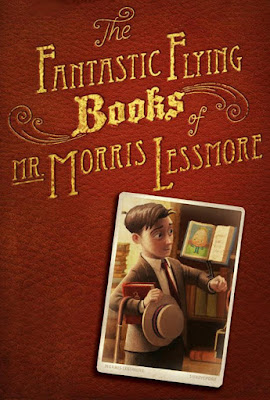 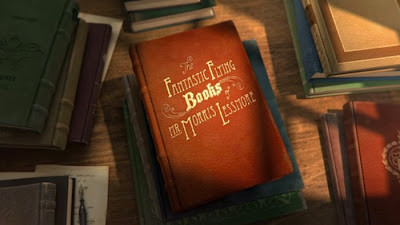 Last week, on January 24, 2012, the Academy announced the nominees for the 84th Annual Academy Awards.

The Fantastic Flying Books of Mr. Morris Lessmore (2011) is one of five animated short films that will be considered for outstanding film achievements of 2011. The winner Short Film (animated.

Morris Lessmore loved words.
He loved stories.
He loved books.
But every story has its upsets.
Everything in Morris Lessmore’s life, including his own story, is scattered to the winds.
But the power of story will save the day.

"Stunningly brought to life by William Joyce, one of the preeminent creators in children’s literature, The Fantastic Flying Books of Mr. Morris Lessmore is a modern masterpiece, showing that in today’s world of traditional books, eBooks, and apps, it’s story that we truly celebrate - and this story, no matter how you tell it, begs to be read again and again."

I love books! I love to read! I watched "The Fantastic Flying Books of Mr. Morris Lessmore" and I am completely fascinated. And the end is so touching! 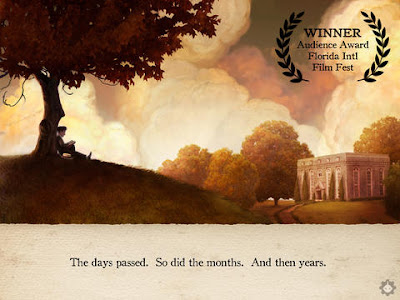 As educators, can we make every day a World Book Day? Yes! We can! And this short animated narrative can be a marvelous interactive resource to do it if you include the animation and the app into school curriculum.

I know how students love to read when their teachers love books. I can assure you. It's a transmissible love! Even to those students who are poor readers. It occurred to me that there is a simple pedagogical principle that explains the appeal of very early learning, homeschooling. Reading begins at home with family since childhood. But sometimes this is not possible. There are some parents who are poo readers as well.

So teachers are important references to students. We must valorize books and reading loud in the classroom! And we can do a better job if we love to read.

The Fantastic Flying Books of Mr. Morris Lessmore ebook/app can be include into the classroom as a captivating resource to share  the values:
Teachers will find some of my publications about Narration and stories: The importance of reading in school ; Prince of Persia: an interesting narrative text, for example.

Based on the award-winning short film, The Fantastic Flying Books of Mr. Morris Lessmore, and illustrated picture-book by Joe Bluhm, the app will have you immersed in the story of Morris, who finds comfort in stories and devotes his life to books when all else is lost.

Interactive children's books for the iPad are becoming more engaging and, in some cases, visually stunning.

Have you read Alice in Wonderland for iPad or iPad features & Education? Please do.

Inspired, in equal measures, by Hurricane Katrina, Buster Keaton, The Wizard of Oz, and a love for books, Morris Lessmore is a story of people who devote their lives to books and books who return the favor.

Morris Lessmore is a poignant, humorous allegory about the curative powers of stories. 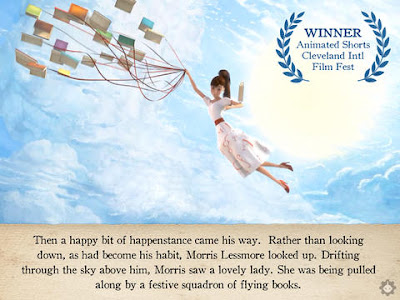 Don't underestimate the power of magic of reading in the classroom with your students appealing to all these wonderful digital resources.

Children and young people love this kind of stories, right? It's a captivating narrative text, with lots of magic, adventure and special values: Love of books, love of libraries.

The love of books and love of reading must begin in kindergarten to be continued on primary, elementary and secondary education.

One important point: schools need more time for reading aloud, choosing and sharing the pleasure of reading books and not just excerpts. The entire story is a pleasure to the students.

Teachers will do reading exciting all along the school time.

I quite agree about the encouragement and success of World Book Day. World Book Day always generates huge enthusiasm for reading in children's school.

If I have any suggestions as how can schools keep that excitement about reading going all through the school? Yes! Love reading. Love libraries, bookstores to go with students. They must feel the atmosphere.

Go to the the public library in your city, some bookstores with your students. Encourage them to buy their own books. Whether they spend their pocket money on a book means every child can add a title to their own bookshelves. 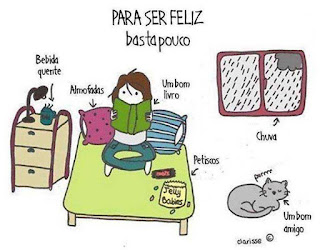 Research shows that owning books plays a key role in encouraging reading and we need to do all we can to make that happen.

Finally, students get better results in other school matters such as sciences, maths, history or geography, because everything goes through reading skills.

Seeing students contextualize the information and literacy skills that we have previously taught is probably one of the most joyful experiences as an educator.

"Books are both object and idea. Tangible in form, intangible in content, they express the mind of an author and find meaning in the imagination of readers.

Reading is this private conversation, but books are all about sharing - sharing experience, knowledge and understanding."

Schools : The Love of Books !  Animated short film & app by G-Souto is licensed under a Creative Commons Attribution-NonCommercial-NoDerivatives 4.0 International License.

Students! Your idea on space!

The European Space Agency has a responsibility to educate the youth of Europe in matters concerning space exploration and it is constantly looking for new ways to engage educators and their students.

As the power of social media grows, ESA and YouTube Lab Space have decided to make the most of it: promoting scientific experimentation in space.

It is not the first time that YouTube is engaging young students in different school curriculum.

Now, YouTube Space Lab. YouTube believes that space is more exciting and accessible than ever. And it is!

YouTube Space Lab is an innovative venture that will see Google working with the ESA, Lenovo, NASA, JAXA and Space Adventures to promote scientific experimentation on space.

On this channel, you can discover space by watching the amazing videos we find from across YouTube.

Students interested in science - Biology and Physics - between 14-18 years were challenged to come up with a science experiment which will be streamed live on YouTube from the International Space Station, along with other great prizes.

Young people suggested an experiment that could be done on space, The application needed to be made in the form of an explanatory video posted to YouTube before 7th December 2011.

The shortlist of 60 candidates (between 5.500 candidates) was published the first week of January 2012.

Overall, the US led with 10 finalists, followed by India with nine. Rounding out the top five countries in terms of total submissions are Poland, Canada and Spain.


Candidates was selected by a panel of international judges including astronauts from JAXA, NASA, CSA and the ESA, Bertrand Piccard and Stephen Hawking.

The YouTube community was called until yesterday, January 24th, to help judges make their choices.

This will then be whittled down through a combination of public votes and the decisions of the panel. Two overall winners will be selected in March.

The winning experiment will be conducted on the International Space Station and streamed via YouTube across the world. Wow! Such an adventure! And emotion, of course!

As if this were not impressive enough, the project is offering additional incentives including computers, trips to Japan or Russia and the opportunity to experience a zero-gravity flight.

This is a wonderful chance to inspire interest in Science and space exploration of young students as competitors and the audience around the world.

"The YouTube Space Lab campaign is an excellent, creative way of reaching out to future generations of scientists, on the ground and in orbit. Today, numerous fundamental and applied research experiments in life and physical sciences, Earth and space monitoring as well as technology and education are performed on our Columbus laboratory on the ISS, closely coupled to terrestrial research programmes and issues."

Thomas Reiter of the ESA

Two teams from each of the Americas; Europe, Middle East and Africa; and Asia-Pacific).

Finalists will travel to Washington, DC, for special events, including the opportunity to take a zero-G flight.

“If our competition can just play a small part in getting kids interested in science, then we’ll be very, very happy,” (...) “My vision is the final live stream will be the world’s largest science classroom.”

Students! Your idea on space by G-Souto is licensed under a Creative Commons Attribution-NonCommercial-ShareAlike 3.0 Unported License.
* Note: Zahaan Bharmal went on to study physics at Oxford University before joining Google and has been a vocal proponent of teaching young people about space. Now he is Google’s head of marketing for Europe, the Middle East and Africa.