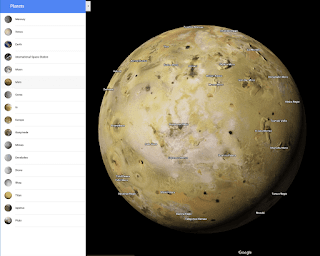 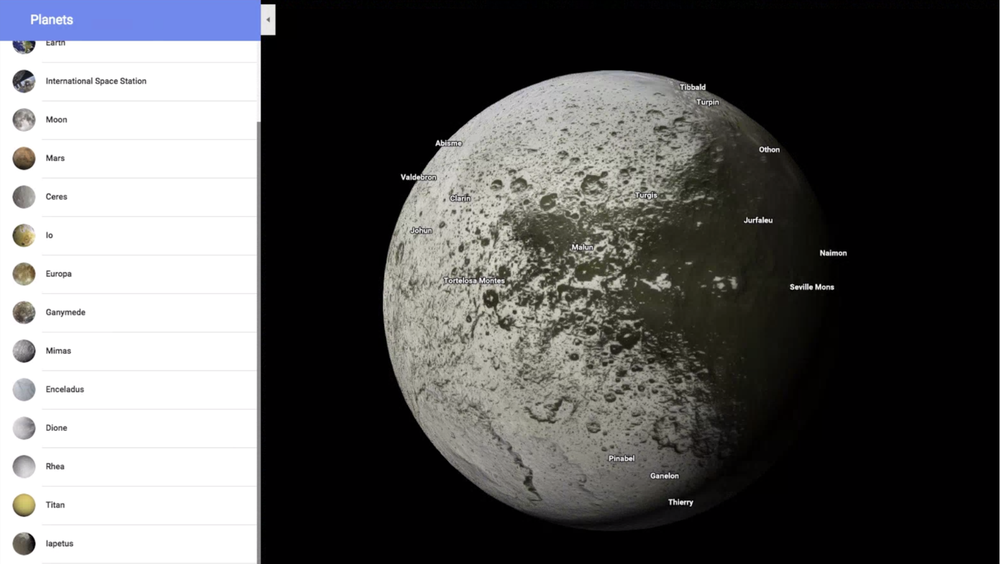 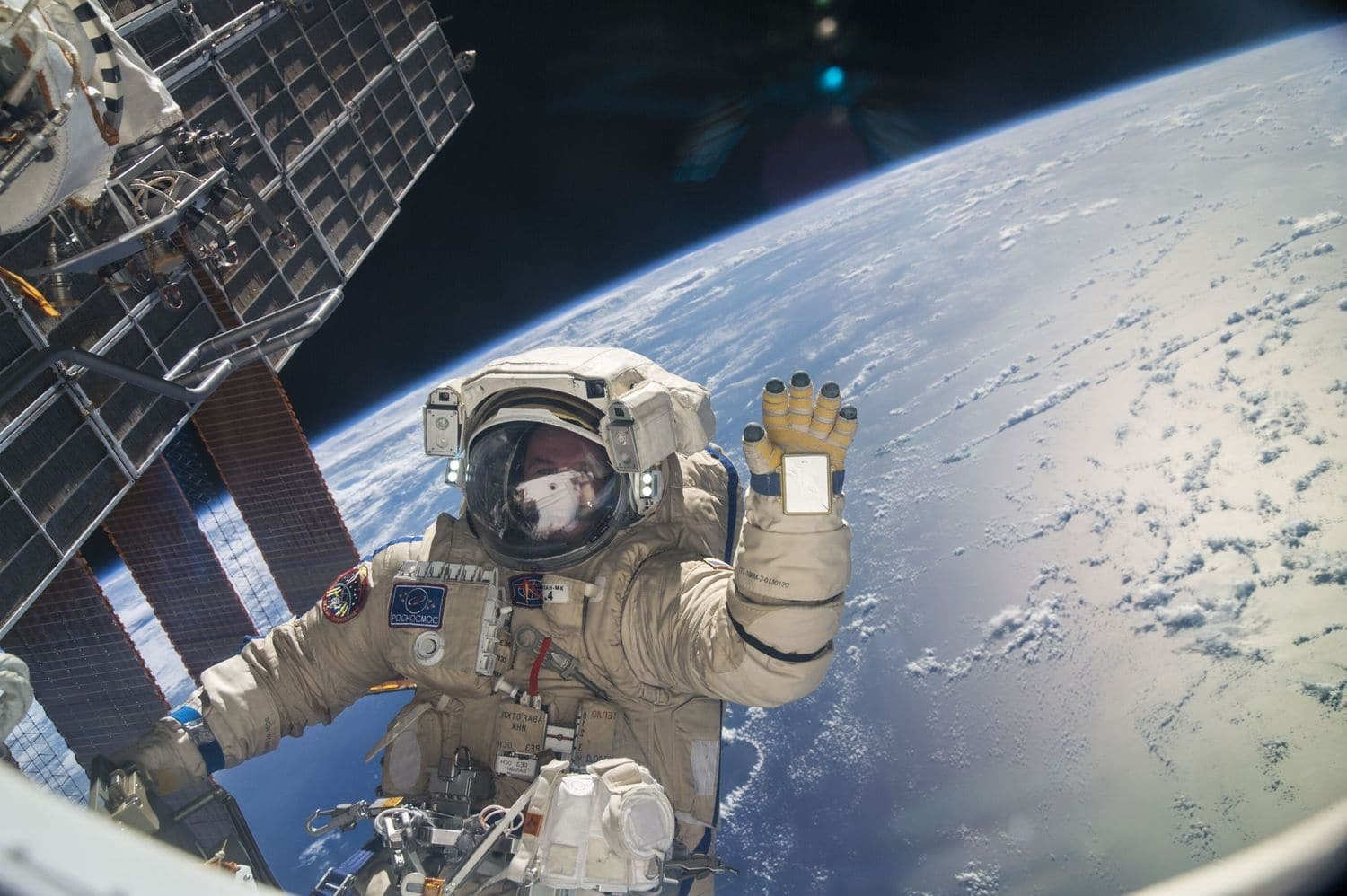 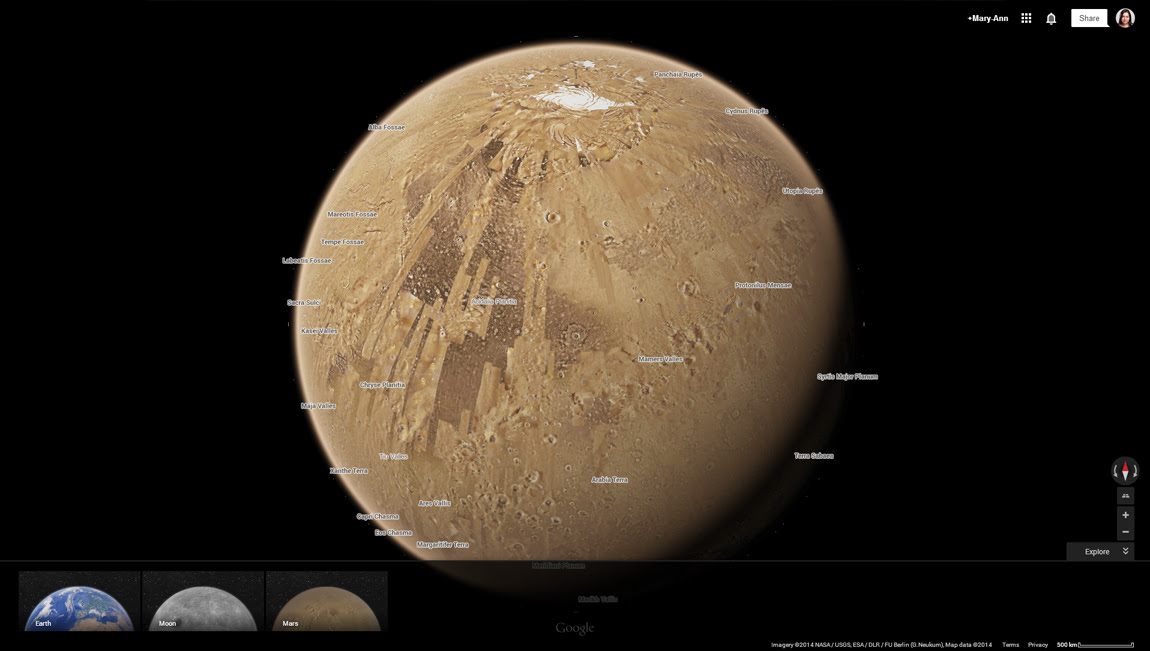 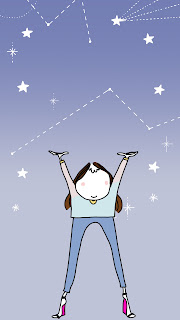 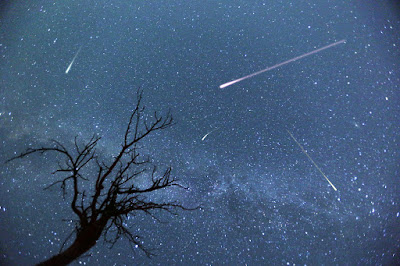 Love shooting stars? Then you’ll love the Orionid Meteor Shower, the second meteor shower of October, which peaks October 21-22 each year.
One of the best sky shows of the year, will peak between Oct. 20 and 22, when the Orionid meteor shower reaches its best viewing.

An image of Halley's Comet taken in 1986
Credit: NASAhttps://www.space.com/
The meteors that streak across the sky are some of the fastest and brightest among meteor showers, because the Earth is hitting a stream of particles almost head on.
The particles come from Comet 1P/Halley, better known as Halley’s Comet. This famous comet swings by Earth every 75 to 76 years, and as the icy comet makes its way around the sun, it leaves behind a trail of comet crumbs. At certain times of the year, Earth's orbit around the sun crosses paths with the debris.

Orion
https://www.space.com/
Tonight, could we watch meteors in the annual Orionid shower?
Scientists say that we have a good chance, even though this morning before dawn might have presented the peak numbers.
We can watch pieces of Halley's Comet during the Eta Aquarids (in May) and the Orionid meteor shower (in October and November), NASA meteor expert Bill Cooke said.
The comet last visited Earth in 1986 and will return next in 2061.


Orionids:
The Orionids are named after the direction from which they appear to radiate, which is near the constellation Orion (The Hunter).
The Orionids, which peak during mid-October each year, are considered to be one of the most beautiful showers of the year.

If the meteors originate from Comet Halley, why are they called the Orionids?

The answer is that meteors in annual showers are named for the point in our sky from which they appear to radiate. The radiant point for the Orionids is in the direction of the constellation Orion the Hunter. Hence the name Orionids. 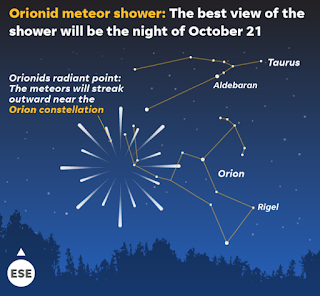 Orionid meteors are known for their brightness and for their speed. These meteors are fast - they travel at about 148,000 mph (66 km/s) into the Earth's atmosphere.

Fast meteors can leave glowing "trains" (incandescent bits of debris in the wake of the meteor) which last for several seconds to minutes.

The Orionids are also framed by some of the brightest stars and planets in the night sky, which lend a spectacular backdrop for theses showy meteors.

NASA
Skywatchers in 2017 will not have moonlight to contend with, as the first-quarter moon will have set long before the meteors put on their best show.
If you miss the peak, the show is also visible between Oct. 15 and 29, as long as the moon isn't washing the meteors out.
Sometimes the shower peaks at 80 meteors an hour; at others it is closer to 20 or 30. Cooke predicted that in 2017, the peak would be at the smaller end of the scale, echoing the peaks of 2016 and years before.

Orionid meteors will be visible from anywhere on Earth and can be seen anywhere across the sky.
If you find the shape of Orion the Hunter, the meteor shower's radiant (or point of origin) will be near Orion's sword, slightly north of his left shoulder (the star Betelgeuse).
But don't stare straight at this spot, Cooke said, "because meteors close to the radiant have short trails and are harder to see — so you want to look away from Orion." 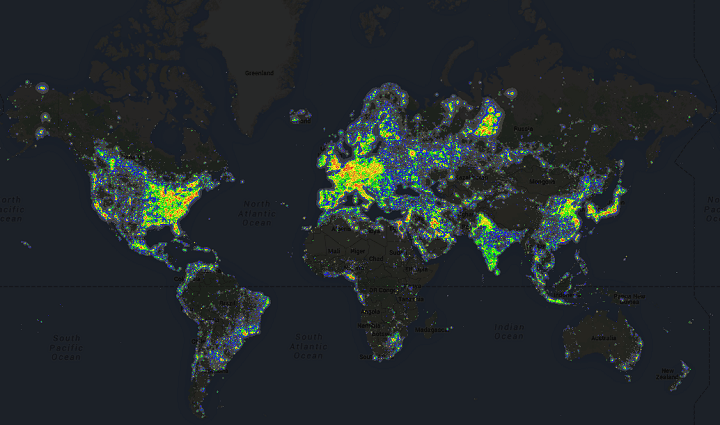 World light polluttion 2017
http://brilliantmaps.com/light-pollution/
As it's the case with most night time sky watching events, light pollution can hinder your view of the Orionid meteor shower. If possible, get far away from city lights (which can hinder the show).
Typically, Orionid meteors are dim and hard to see from urban locations, so you should find a dark (and safe) rural location to get the best views of Orionid activity.

The best time to observe any meteor shower is during the early morning hours (local daylight time), with the numbers of meteors increasing until morning twilight interferes.

Go out and let your eyes adjust to the dark for about 20 minutes. Bundle up against the cold if necessary. Lie back and use only your eyes to watch the sky. Binoculars and telescopes won't improve the view, because they are designed to see more stationary objects in the sky.

meteor showers infographic
credits: Nasa Meteor American Society
https://www.space.com/
Education:
Most of us are excited about Orionid shower. Science students too. Do you remember the Summer Solstice 2016 & ‘Strawberry (June 2016)? Or Catch Some Falling Stars, the Quadrantids (January 2016). Don't miss Eta Aquarid meteor shower (May 2016), Here comes the 2nd Supermoon, the Mega Beaver moon (November 2016), Stay up & watch the Total Eclipse ! (August 2017). Wow what a sky! And so many educational resources.

It's school time to teachers and students. So, prepare your students to sky watching and ask them to do some good shots, or videos with smartphones, or tablets to discuss the theme tomorrow or next lesson. May be compare it with the Perseid meteor shower of last year?

The science curriculum will be enhanced with the help of this incredible event.
Meteor showers aren’t just one-night events. In fact, they can last for several days
Do you want a better science lesson ? Enjoy the show!
Hoping to be lucky! The sky is bright. Could I send my wishes tonight? 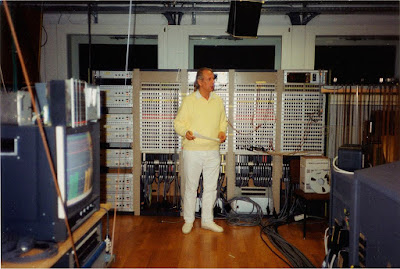 Karlheinz Stockhausen in the WDR Electronic Music Studio in 1991
https://en.wikipedia.org/

As you know Google regularly replaces its logo on its search engine with special Doodles, a kind of celebrations anniversaries.

This Wednesday, 18 October, Google celebrates once more the music. Electronic music. I love music all genres of music as you know.

Electronica seems like a fairly recent phenomenon, but in fact much of the musical genre's roots can be traced back a venerable 66 years.

So the Doodle celebrates the 66th anniversary of the Studio for Electronic Music. Wow! Are you feeling the beat? Well, our students will do it if they discover the doodle.

"The concept for a studio to create electronic music was birthed by composers Werner Meyer-Eppler, Robert Beyer, and Herbert Eimert, who for years had brainstormed the technical requirements of the challenge,"
Google 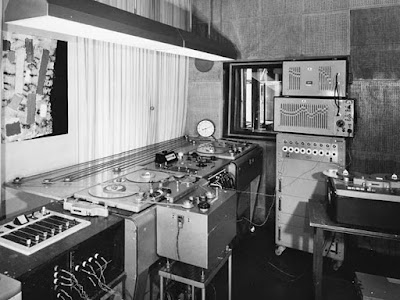 WDR Electronic Music Studio,
Werner Meyer-Eppler, Robert Beyer & Herbert Eimert, Germany, 1951
https://120years.net/
Some facts:
The Studio for Electronic Music known as the first modern music studio became a haven for innovative musicians and producers around the world.
It was here that electronically synthesized sounds were mixed to create an entirely new genre of music that so many have come to love.


The Studio for Electronic Music (Studio für elektronische Musik des Westdeutschen Rundfunks) was established at the West German Broadcasting facility in Cologne, Germany.
It was the first of its kind in the world, and its history reflects the development of electronic music in the second half of the 20th century.
The concept for a studio to create electronic music was birthed by composers Werner Meyer-Eppler, Robert Beyer, and Herbert Eimert, who for years had brainstormed the technical requirements of the challenge.
The Electronic Music Studio at Westdeutscher Rundfunk (WDR) was founded by the composers Werner Meyer-Eppler, Robert Beyer, and Herbert Eimert (the studios first director) and was based on Meyer-Eppler’s ideas outlined in his 1949 book ‘Elektronische Klangerzeugung: Elektronische Musik und Synthetische Sprache’. 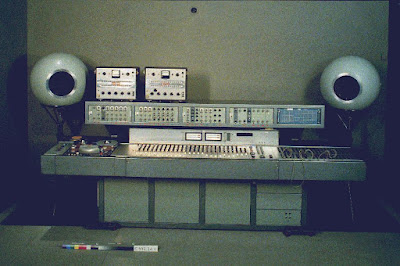 This thesis defined the ongoing theoretical character of the studio as being based around electronically synthesised sound – in sharp contrast to Schaeffer’s musique concrète acoustic approach at GRN in Paris.
Artists in the studio created breakthrough beats, editing and mixing sounds using new types of equipment and technical composition. Composers and producers came from far and wide as the studio became a breeding ground for musical innovation.
The studio was fertile ground for breakthroughs in music and sound until its closure in 2000. 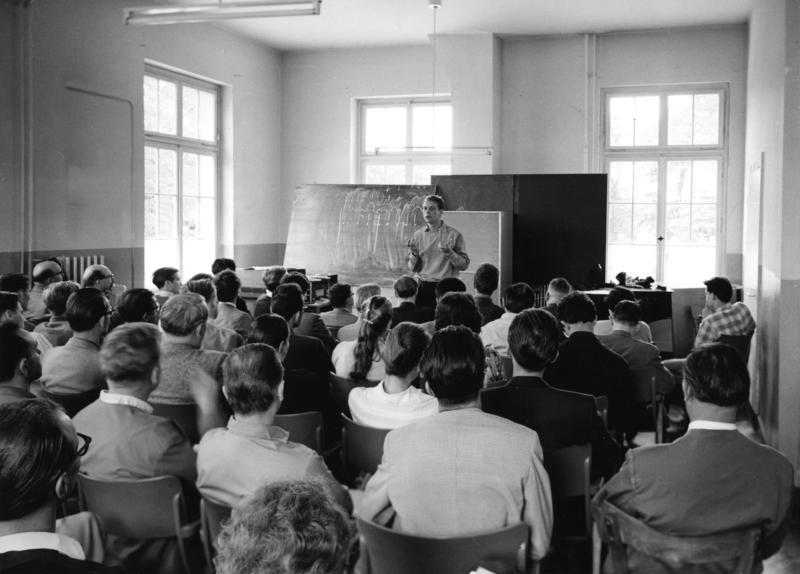 12th International Vacation Courses for New Music
Seminar: Karlheinz Stockhausen/July 1957
https://en.wikipedia.org/
He became part of the Darmstadt group, espousing serial music, and began to work at the WDR studio in 1953.
His first piece, Studie I (1953) was created by additive synthesis, confining his audio source to sine wave oscillators. He devised specific relationships between frequencies, duration, amplitude, amplitude envelope shapes. Through splicing and bouncing tracks, Stockhausen explored new levels of timbral control, being able to control the presence of different partials.
Karlheinz Stockhausen was a seminal figure in post-1945 modernism and one of the most experimental and progressive composers of the 20th century.
He redefined notions of what types of sound could be deemed acceptable in composition and took a pioneering approach with his use of electronics in art music.
A critic calls him "one of the great visionaries of 20th-century music". 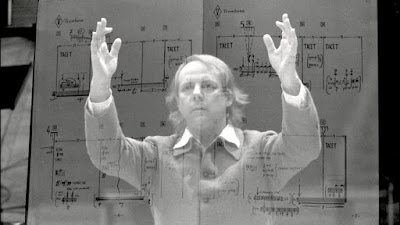 Stockhausen conducting in 1980
superimposed on a page from Stop
https://en.wikipedia.org/
Education:
This Google doodle on Electronic music will be perfect to include the theme into your lessons in Vocational schools: Music & Electronics.
The message to maximize young learners potential as creators. It means to motivate students that speak a different music language, opening the door of music to build new understanding platforms between vocational school - Music schools - and young musicians' interests and creativity.

The 'attitude' of educators is improving skills music learning. Students are brilliant creators if educators can understand their mind and genius and natural skills.

So, think using the Doodle, a digital resource by preparing an interesting music lesson. Electronic music crosses culture crosses over all generations and magnetize young people more and more.

"Celebrating the diversity of thought and imagination that built this studio and transformed the possibilities of music."