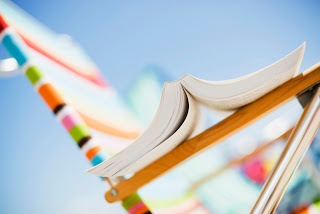 MEDEA Awards 2012 announced its call of entries some months ago. Countdown to MEDEA Awards deadline September 17.

As you know since 2009 I am writing about MEDEA Awards. It's a pleasure to divulge such an interesting project that encourages innovation and good practices in the use of media in Education.

As an educator, I know how important it is to be encouraged as I was in 2004 from Global Junior Challenge.

"Entries are arriving at the MEDEA Awards Secretariat from practitioners and educational media producers from Europe and further afield and we are looking forward to a receiving a lot more before the 17 September deadline."

"In recent years there has been remarkable interest in the creation and use of digital video and audio in Education, boosted by the increasing impact of multimedia and video based websites and applications on the internet and mobile devices."

Of course this interest began in 1999-2000, when the first 'screen-generation' arrived at school. Innovative educators understood the meaning of changing academic practices. And mobile devices really pushed up for pedagogical applications.

Now video, audio are routine components of an open education (in and out school)  based on educational environments that recognize andreflect the media-rich world in which our learners now live. El Rap de la educación 2.0 is conclusive, don't you think?

The MEDEA Awards are inviting all participants, learners and educators to submit entries now

Participation guidelines:
Entries need to be submitted via the online submission form and sent to arrive at the MEDEA Secretariat via post, e-mail or fax before the closing date: 17 September 2012 (midnight).

All finalists will be notified in the beginning of November and will be invited to take part in the awards ceremony taking place during the Media & Learning Conference 2012, where the final winners will be announced.

There are five MEDEA Awards 2012:
Participants:

Before submitting a multimedia project or production, MEDEA Awards secretariat strongly recommend that you read the Judging Criteria to understand what the judges are specifically looking for and the criteria they will use when judging your submission, as well as the Terms & Conditions of submission, where you will find the rules for participation in the MEDEA Awards. Read also the important Copyright Information page.

With regard to the pedagogical quality, the judges value the comprehensiveness of the resources and the close integration with the curricular activities.

In addition, the fact that teachers are present with a variety of multimedia-based activities is highly appreciate.

The suitability of the resources for use in special needs education is considered really important.

All finalists will be notified in the beginning of November and will be invited to take part in the awards ceremony taking place during the Media & Learning Conference 2012, November 14-15, Brussels, where the final winners will be announced.

We invite participants to submit entries now! You can also take a look at our video of last year’s awards ceremony.

Convinced? Not yet? Take a look at the video of last year's awards ceremony.

Now, you are convinced!  So accept the invitation and submitt entries now

MEDEA Awards 2012: Submitt your entries by G-Souto is licensed under a Creative Commons Attribution-NonCommercial-ShareAlike 3.0 Unported License. 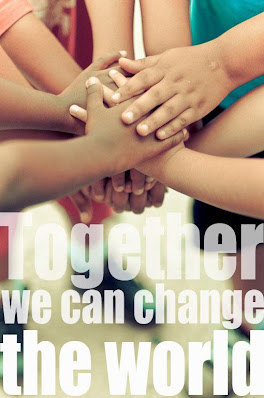 “This year’s World Humanitarian Day presents an historic opportunity to bring together one billion people from around the world to advance a powerful and proactive idea: People Helping People. That is the best way to honour the many fallen aid workers we mourn today, and to celebrate the efforts of others who carry on their noble mission by rushing assistance to those who are suffering.”
Secretary-General Ban Ki-moon 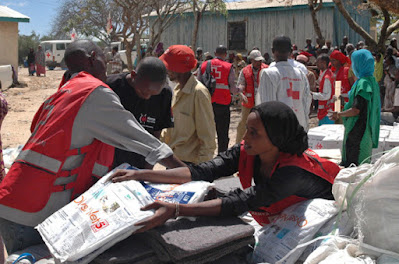 People helping people
credits: Getty Images
https://www.aljazeera.com/
"Natural disasters, conflicts and other emergencies threaten the lives and health of millions of people every year. In the middle of such crises, thousands of dedicated humanitarian workers strive to care for those who have been affected and support local authorities to deliver assistance. On World Humanitarian Day, WHO and other international bodies are highlighting the roles performed by humanitarian workers, and remembering aid workers who have been killed or injured while performing their vital roles."

World Humanitarian Day is the time to recognize those who face danger and adversity in order to help others. The day was designated by the General Assembly to coincide with the anniversary of the 2003 bombing of the United Nations headquarters in Baghdad, Iraq, which killed 22 UN staff. Special Representative of the Secretary-General to Iraq. 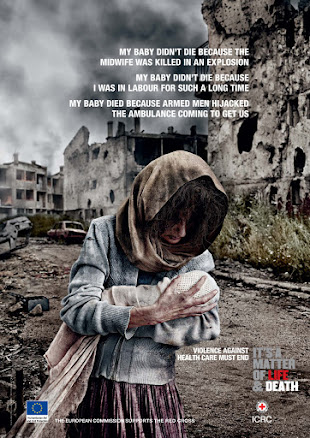 Europe has a long and proud tradition of humanitarian service and is the birthplace of many of the world’s largest and most efficient relief organizations.
Throughout the years, EU Member States have engaged actively and donated generously to support the victims of numerous humanitarian emergencies.

Every day, humanitarian aid workers help millions of people around the world, regardless of who they are and where they are. World Humanitarian Day is a global celebration of people helping people. 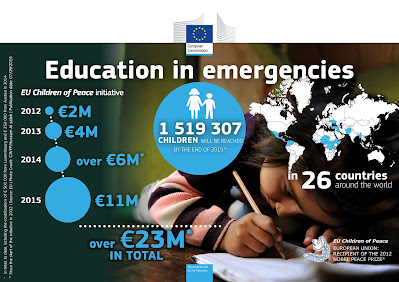 EU Human Rights
https://www.un.org/
This year’s campaign I Was Here is about making your mark by doing something good, somewhere, for someone else.

"Humanitarian Day" has recruited Beyonce Knowles to be its face and she released a video of her song "I Was Here", filmed in the UN general assembly, to mark the day.

Humanitarianism it’s human beings at their cooperative, collaborative best and it happens all over the place, everyday, through informal activities that are built naturally into healthy communities and relationships.

Level: All levels (educators must adapt the activities to the level they are teaching).

Curriculum: Civics as a cross-curricular ; other.

Humanitarianism can be teach at school. Young people begin to understand some values as :
To show support for World Humanitarian Day, the students might be invited to do one of these ten good deeds: 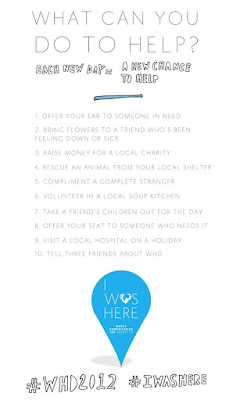 Students might understand that we don't have to be a UN staffer or aid worker to take part of World Humanitarian Day.

In addition pledging support through social media networks, Facebook or Twitter (school accounts), I Was Here encourages students and educators to commit to do one good deed for someone in need this Sunday. 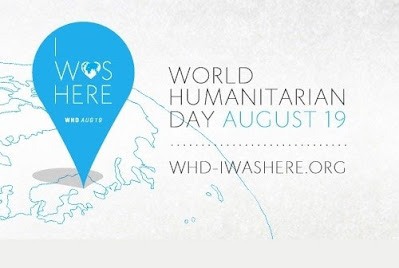 I Was Here
https://www.un.org/

"It's high time we rise together. Do one thing for another human being. Nothing is too small. It begins with each of us."

I was there
UN's "I was here" World Humanitarian Day campaign; What will you do on the day?

Description of the video (Spanish language):

I can understand and speak Spanish quite well, but I don't dare to write in Spanish. However I could not miss the opportunity to share with you this 'Rap of education'. Fabulous isn't it!

After the fantastic and funny video about 'Rapping elements' on my post Rap in Chemistry curriculum! - another rap also created by students.


So, as you see, students are very creative!


Web 2.0 is about revolutionary new ways of teaching, learning, creating, collaborating, editing and sharing user-generated content online. It's also about ease of use.

Great number of teachers embrace technology and social media. Others hide. Many ignore. So what does the average teacher do if they’re somewhere in the middle?
There are more of these ‘Web 2.0′ tools than we can keep up with, but when you integrate tech in your curriculum ‘keeping up’ is part of your job.
Of course we can not miss out on a great opportunity to teach and learn (you heard the 'Rap students') about some Web 2.0 tools that are currently being used in the classroom by teachers around the world.

A good advice! You must be sure of your ideas and the manipulation of the tools you choose to introduce in your lessons.

Educators and students can master many of the tools in minutes. Technology has never been easier or more accessible to all.

Here some few useful social media and tools that I have shared with you    presenting some ideas to involve your students in school curricula. Later, we will be back to 'Rap in education'.

Great way to share posters and images you’ve made with friends, colleagues and schools


Twitter
The micro blogging service that many teachers a using. I love it and I shared with you some ideas to use it in your lessons. For example Its about Twitter and Poetry (April 2011).


GoogleEarthView anywhere in the world anytime. A fantastisc tool to use in the classroom. Education: some ideas about London 2012 (July 2012) was written thinking on educators that were preparing their lessons and I used Google Earth as a digital resource for students.

Edmodo
Social learning environment and one of the best ways to teach with tech.

Facebook
The social network that some teachers are using in school. I love it. Facebook au collège? Pourquoi pas? (June 2011, French language) is about using Facebook in education (students up-to 13).

Animoto
Make beautiful videos from images in a snap. You can search for some posts where I presented videos as an interesting activity for students.

Google Art Project
A good interactive tool for school curricula. Now that Olympic Games are still in the air, The Olympic Museum is a splendid resource. You remember that I wrote about Google Art when it appeared: The Google Art Project? (February 2011).

Free wikis for educators. They’re simple to use and easy to set up. Very helpful. Students can write a wiki about any subject of the curriculum.

WordPress.com or Blogger.com
Build and share a blog with students, classes, or colleagues. My students and I prefered Blogger.com, it is simple with large options. They have two thematic blogs about Environment: Torrinhas Verdes and Torrinhas Exploradores Polares.

Every social network can play a pivotal role in education, and there are so many! This is a very short list.

Make your own choices after the evaluation of students profile and, of course, the level you teach.

And what's about Rap?

In a cross-curricular projec - Languages, IT, Music - propose your students to create different rap songs!

Rap! They really like it! Let them discuss themes or subjects that they would like to have in school curricula.

Students can plan with the teachers how they would like to introduce these subjects (in and around curriculum) and then in groups, develop rap songs.

Organize a contest and let the students vote the most interesting subject and creative rap.

This activity can be developed in Elementary education and Secondary Education.

It's up to the educators motivate the students. Never forget it!

You will be delighted how students are amazing when they are free to show their creativity in the classroom.

Don't underestimate your students capacities, even the reluctant ones - sometimes these students show in this kind of free activity, the skills you never knew they have - to learn some difficult subjects in school curricula.

In the 21th century web 2.0 was the way for rethinking school time and captivating the new generations.

Hoping that "El Rap de la educación" video might be a good motivation to promote the use of web 2.0 among the last reluctant educators. 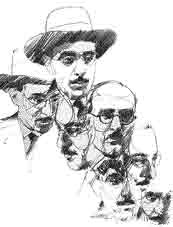