This document is published in the Proceedings Book (vol.II) of the m-ICTE2009 Conference titled Research, Reflections an Innovations in Integrating ICT in Education.  The document was online (pdf) until 2011.

My participation was included on the theme Educational Software/ Webs Experiences. The aim of the Poster was the presentation of some digital resources created by me as a part of the blended learning I practice.

This presentation was very appreciated for the different speakers at the m-ICTE2009.

My experience was one of the first in the Portuguese secondary education.

You can watch a version in slideshare Anatomy of Digital Resources Millenium Learners ICTE 2009.

I think it is a systematized document always actual and helpful for educators if they are preparing the introduction of some open educational resources in the classroom.

The question is not whether educators can use open educational resources in the classroom, but which ones to use and how to use them.

The assessment is fundamental before, during and after using them in the classroom. You have the different kind of assessment on the paper and the slideshare.

Anatomy of Digital Resources in Learning Generation by G-Souto is licensed under a Creative Commons Attribution-NonCommercial-ShareAlike 3.0 Unported License. 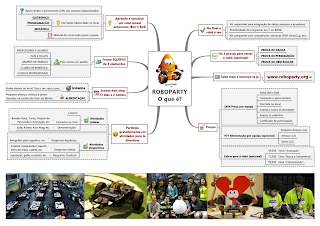 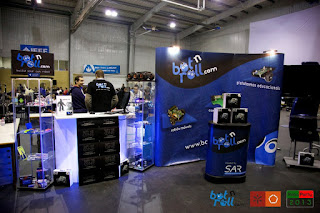 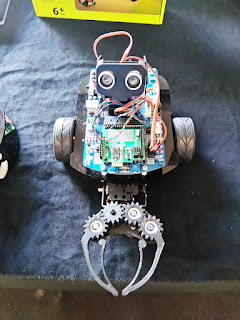 The 6th RoboParty takes place in Guimarães, Portugal, February 23-25, 2012 at the Pavilhão Desportivo (Sports Hall) of the University of Minho.

The RoboParty 2012 aims to immerse students from the 1st grade to university studies, as well among the general public in the exciting world of Science and Technology (Electronics, robot programming, and Mechanics).
"Get 3 friend interested in technology, bring a teacher of yours (or other grown-up)"
More than 400 students (100 teams) are participating (with their teachers), aged between 15-18. They learn to construct autonomous and mobile robots in a simple and entertaining way, supported by qualified tutors.

"Initially, a short course is given to teach the first steps in electronics, robot programming and mechanical construction. Afterwards, a robotic kit developed by the company SAR - Soluções de Automação e Robótica and by Minho University is supplied to be assembled by the participants (mechanics, electronics and programming), belonging to the team in the end of the event.
The tutors will be following the team's work closely in all stages in order to assure that every robot works properly in the end.
There are three competions: Porsue competion, Obstacle competion and Dance competion
And of course "Robot construction competition" (quality of the robot's construction): Assessment made on Saturday evening.
Finally, Creativity Prize (robot aesthetics).
Please, visit the full program and activities here

RoboParty is on Facebook too.
The event has had an enormous growth since the 1st edition, both in the number of teams, participants and visitors. 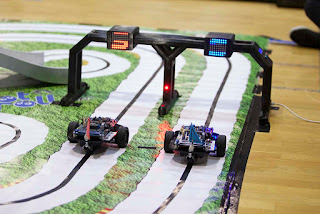 "Use the motivational effects of robotics to excite students about science and technology." *
It's not the first time I write about the increasingly important role of Robotics in Education. For boys and girls, of course.
Robotics has aroused great curiosity among young people. There are more groups and robotics clubs throughout Portugal concentrated in universities, secondary schools and vocational schools.
Remember my posts Robotics in Education (April 12, 2011) about robot competition, or assistive robotics, whose goal was to aid gifted young students, improving the quality of their lives.
As practitioners, we know that in the same classroom, we have special needs students of both sides: one side, students we must motivate because they present some difficulties in learning, on the other side,  students we must captivate to go further or they will be bored in following a linear curriculum.


Let us teach whatever we have to (or like to), but using different educational tools and resources. 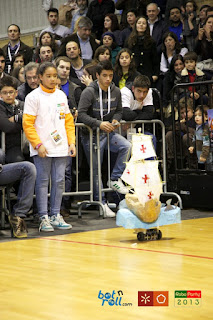 Robot Party
https://www.facebook.com/RoboParty/
And on Robotics in Education Seminar (January 12, 2011), whose aim was to promote Technology among young girls to increase gender equality in their future career.

"The majority of documented courses using robotics in an instrumental way while teaching other topics are at the college and university level, robots have been used at the K-12 level education as well.

Most of the activities at this level are a form of outreach program, aimed at raising interest in higher engineering education among selected group of (usually high-school) students, but there are also activities aimed at students from socially deprived areas, where the main objective is to attract those students to some form of education at all."

As you see, Dr Malec talks about differerent groups of students too.

As teachers, we must do our best to reach all students using different pedagogical resources in order to captivate them.

Now, watch the video below. Students and teachers speak about Robotics in the curriculum:

"All students are technologically literate, mathematically competent, and confident about their future."

RoboParty 2012 in Education by G-Souto is licensed under a Creative Commons Attribution-NonCommercial-ShareAlike 3.0 Unported License.
References:
NASA | Robotics in Education
http://education.ssc.nasa.gov/robotics.asp
*Carnegie Mellon | Robotics Academy
http://www.education.rec.ri.cmu.edu/
Jacek Malec, 'Some thoughts on robotics for education',
http://fileadmin.cs.lth.se/cs/Personal/Jacek_Malec/psfiles/aaai01rae.pdf
Posted by G-Souto at 2:02 AM No comments: 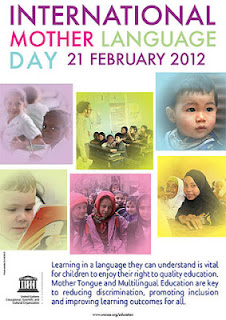 "Linguistic and cultural diversity represent universal values that strengthen the unity and cohesion of societies. The recognition of the importance of linguistic diversity led to UNESCO’s decision to celebrate International Mother Language Day."

International Mother Language Day has been celebrated every year since February 2000 to promote linguistic and cultural diversity and multilingualism.

This year, the theme of the International Mother Language Day was "Mother tongue instruction and inclusive education".

UNESCO highlights the importance of mother tongue as part of the right to education and is encouraging its member states to promote instruction and education in the mother tongue.

Languages are the most powerful instruments of preserving and developing our tangible and intangible heritage. So, I think it always important to spread this message. 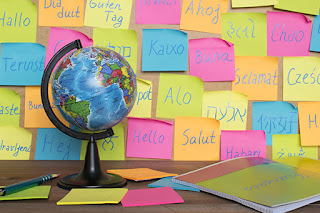 Linguistic diversity is our common heritage. It is fragile heritage. Languages matter, remember my post last year? There, I wrote some important messages about the minority languages.

Of the 7,000 or so languages spoken on Earth in our days, about half are expected to be extinct by the century's end. They are threatened by cultural changes, ethnic shame and government repression.

But in these last times, researchers tell us that technology and internet are allowing many languages to increase audience.

"Globalisation is usually blamed, but some elements of the 'modern world', especially digital technology, are pushing back against the tide." The explosion of the techonologies to make transmission possible is helping.

Dr Colette Grinevald, for example  refers Skype as a technology that makes distance teaching through listening and learning.

Dr Colette Grinevald of the University of Lyon (France) is a pioneer in endangered languages. A Harvard Ph.D. in linguistics and UNESCO expert, she worked as a linguist in the USA for 30 years with many field trips to Latin America to document, defend and promote endangered languages and the people who speak them. She has an interesting interview "Speaking your mother tongue is not a disability!” that you can read here 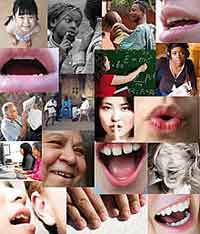 
Vanishing languages spoken by only small groups of people around the world, can be saved from extinction by  technology as Skype or social networks as Facebook?

On an interesting article, BBC presents the opinion and research of Dr K David Harrison, an associate professor of Linguistics at  Swarthmore College:

"Facebook, YouTube and even texting will be the salvation of many of the world's endangered languages, scientists believe." Yes, it can be so!

"Small languages are using social media, YouTube, text messaging and various technologies to expand their voice and expand their presence."

Globalisation exerts negative pressures on small cultures to assimilate. But there is a positive effect of globalisation: you can have a language that is spoken by only five or 50 people in one remote location, and now through digital technology that language can achieve a global voice and a global audience, he explained. 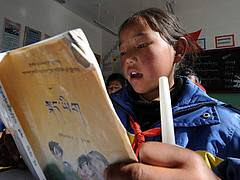 © Xinhua | UNESCO
A young student learning Tibetan language in a primary school in the District of Dagze, in the Tibet Autonomous Region
http://www.unesco.org/

"You need to make the language cool for young people."

No doubt! This is why I used Facebook, Twitter, blogs, text messages in my school curricula. Students used them often and they felt near their way of communicating.

We used text messages to interact about school homeworking when they needed some explanation about grammar, vocabulary, poetry or other subject of the languages curriculum (mother language and foreign language).

All the methods are pedagogical when well understood by students and the results are positive.

Dr Harrison spoke about North American tribes use social media to re-engage their young. See? Why not us?

Dr Grinevald also said: "People confuse the written form as being the “true form” - in other words if it's not written it can’t be a language. In fact the natural state of languages is the spoken word.
Real life is really speaking and listening. We have to face the fact that new technologies can give accessibility to all knowledge."

"Linguists came in and labelled our language moribund, meaning it was heading for the ash heap of history; and our tribal people and our council decided that wasn't going to happen. So we devised a plan to go forward to start teaching our dialect here in the Siletz Valley,"

Dr Harrison says not all languages can survive, and many inevitably will be lost as remaining speakers die off. But he believes the new digital tools do offer a way back from the brink for a lot of languages that seemed doomed just a few years ago.

Ensuring the preservation of languages can improve the quality of education, maintain cultural diversity and support nation-building. However, implementing an educational reform for bilingual education on a national scale can be challenging.

Helena De Moraes Achcar talks about the example of Bolivia, where an educational reform encouraged intercultural bilingual education in the rural areas, while urban areas were not incorporated into the educational policy.
Courtesy of SOAS Radio, University of London

Speaking one’s mother language is a right that not everyone can take for granted, especially in places where local, mother tongues are threatened by more dominant languages. Today, bilingual education programmes worldwide illustrate how discussions about “mother languages” must include the “other languages”. SOAS Radio, UNESCO’s partner from the University of London’s School of Oriental & African Studies provides global perspectives on the debate.

Linguists have also unveiled eight new "talking dictionaries" as part of a project to save thousands of ancient tongues from extinction.
The digital dictionaries feature more than 32,000 written words and, 24,000 audio recordings taken from native speakers from remote corners of the world.
The talking dictionaries initiative from National Geographic Society's Enduring Voices project is an attempt to prevent these ancient languages being forgotten.

A world without words ? Mother Language day ! by G-Souto is licensed under a Creative Commons Attribution-NonCommercial-NoDerivatives 4.0 International License.