The Portuguese Robotics Open, which had its 1st edition in 2001, aims at promoting Science and Technology among students from the 1st grade to university studies, as well among the general public, through robot competitions.
The Festival takes place every year in a different city, and includes also an international conference where national an international researchers present their latest work in the field of Robotics.
The event has had an enormous growth since the 1st edition, both in the number of teams, participants and visitors. The Portuguese Robotics Open is currently an initiative of Portuguese Society of Robotics.

Young participants that love soccer, including robot soccer, aiming to become world champions such as their university colleagues that were world champions in 2008 in the RoboCup Middle Sized League. In this league they had the chance to test their assets and show the best of their skills in building and programming soccer robots.

Robotic junior dance
http://robotica2011.ist.utl.pt
Dance is a source of joy and happiness for all ages. Programming robots that dance autonomously is another source of joy for the young participants of this league, one of the most popular leagues of this event. Both programmers and robots danced all together sharing their joy with the audience.

The 11th International Conference on Mobile Robots and Competitions is an international scientific meeting in the field of Mobile Robotics technically co-sponsored by the IEEE and sponsored by the IEEE Robotics and Automation Society (RAS), through its Portuguese Chapter.
Its scope encompasses, but is not limited to, the fields of Artificial Intelligence, Robotics and Education. 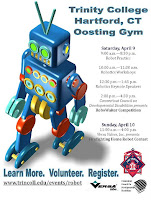 "Trinity’s annual robot competition, assistive robotics whose goal is to aid people with special needs and improve the quality of their lives – is playing an increasingly important role."

Altogether, about 125 teams – including those from Canada, China, Indonesia, Israel, Mexico, Portugal and, of course, the United States participated in what has become one of the premier robotics events in the world. 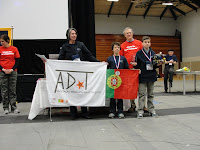 Desenvolver o Talento (ADoT), Portugal
http://www.adotportugal.com
ADoT is a Portuguese association to aid gifted young people and improve the quality of their lives.

Congratulations to ADoT students and teachers!

Robotics in Education by G-Souto is licensed under a Creative Commons Attribution-NonCommercial-ShareAlike 3.0 Unported License.