Love doodles! My usual readers know how often use them including into school curriculum. And programming

And today, 4 December, Google is celebrating 50 years since children programming languages were introduced.

To mark this occasion, Google team, Google Blockly team, and researchers from MIT Scratch created the first ever coding doodle! Coding for Carrots.

It features a rabbit, and if kids/student click on the play button, the interactive doodle encourages students to create code blocks and help the furry animal cross six levels to reach and reach its favorite food. Acarrot.

"With today’s Doodle - the first coding Doodle ever - we celebrate fifty years of coding languages for kids by “Coding for Carrots.” In the interactive Doodle, you program and help a furry friend across 6 levels in a quest to gather its favorite food by snapping together coding blocks based on the Scratch programming language for kids."

The first coding language for kids, Logo, was developed and designed by Seymour Papert and researchers at MIT in the 1960s, long before personal computers were introduced.

"Kids programming on computers must have sounded futuristic and impractical in the 1960’s when Logo was first created. In fact, even in the 1980’s when I wrote my first lines of code, my working-class parents questioned how coding would ever benefit their nine-year-old daughter."

Logo allowed for free children to program and control the movements of a turtle and also provided them with the opportunity to explore ideas in maths and science.

Papert and his colleagues realized the potential of computers and how they could be an instrumental tool used by all children as a powerful tool for learning.

Papert and researchers at MIT saw "coding as a way for kids to develop confidence and fluency with a piece of powerful, modern, and one-day ubiquitous technology." 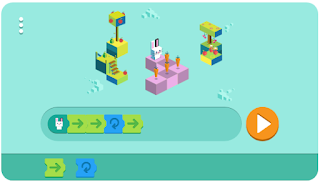 The Coding Doodle into school curriculum:

Today, December 4 2017 also marks the beginning of the Computer Science Education Week that will continue till December 10.

Google's Doodle teaches users how to draw up basic code with the help of Google's new furry friend.
The white rabbit, on his hunt for carrots, how kids/students how programming code can make the rabbit do an action.
By inputting the correct pattern kids can help the furry white rabbit on its quest to eat all of the carrots.
Kids can 'code' the movements for the rabbit which helps him get at the carrots.
This coding tool is based on the Scratch progamming language for kids. Little students can do it by using Scratch, the programming language, created by Lifelong Kindergarten Group (MIT), and putting together coding blocks.
Scratch was developed at MIT and was designed to be less intimidating than typical programming languages, but just as powerful and expressive.

Education:
I often wrote about coding in different posts along the years: Code Week EU (since 2013) ; Are you ready to code with Dr Who ? ; The Google coding tool Oppia; Py, the app to code and other.
Coding was added to the UK's National Curriculum in 2014, Portugal's National Curriculum in 2015 (primary schools) and we are increasingly seeing kids using new words and skills that they are learning.

Movimento Código Portugal from Pavilhão do Conhecimento on Vimeo.

Hour of Code was launched for the first time in USA in 2013. The initial focus was on creating a database of all computer science classrooms in the United States. At the time, Hadi Partovi stated that about 90% of US schools don´t teach programming.
While over half the schools in the US don't currently offer a single course that teaches computer science, at today's event, states and school districts made pledges and announcements to address this issue in their own schools.
Canada's National Curriculum was launched by Primer Minister Trudeau in 2016.

CSE week began in the US but is being celebrated around the world. It's an annual programme that's dedicated to inspiring school students to take an interest in Computer Science and Information Technology.
It's an opportunity for every student to try computer science for one hour. You can also teach the Hour of Code all year-round. Tutorials will work on browsers, tablets, smartphones, or "unplugged."
There's a wealth of tools at yours and your students' disposal to help them learn to code online and this Google Doodle is just the start. An a creative one. 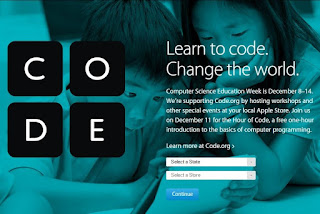 Resources:
Apple offers free hour of coding for kids. Join Apple for an Hour of Code from Dec. 4 to 10, and celebrate Computer Science Education Week.

Whether you’re a kid or a teen student beginner or developer, students can master the basics, code with Swift, program robots—and turn an hour into a lifelong love of code.

Visit the Apple website and choose the best local activities. The store lesson might be better for the sole reason “there’s something about being at a table full of other kids working on their own projects that makes learning even more meaningful for kids.” It’s like school and they always pay attention in school.

Infographic: Hour of Code
https://hourofcode.com/
"This week, millions of people around the world can and will have their first experience with coding. It makes me happy to think of all of the nine-year-olds who will get their first coding experience playing with today’s Doodle. My hope is that people will find this first experience appealing and engaging, and they’ll be encouraged to go further. In some ways, it’s very different from my first coding experience many years ago, but I hope it will be just as inspiring and influential for them."

Every student should have the opportunity to learn computer science. It helps nurture problem-solving skills, logic and creativity. By starting early, students will have a foundation for success in any 21st-century career path.