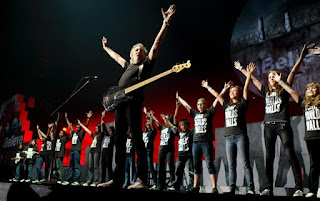 Roger Waters began his European tournée "The Wall" on March 21 (International Day of Poetry), with a fantastic concert, in Lisbon. You can  admire some photos on Blitz (Portuguese magazine of Music).

Rolling Stones, U2 are fantastic in their performances but only Pink Floyd and Roger Waters are able to mix images, scenarios, lights, music and technology with such harmony, even such poetry! 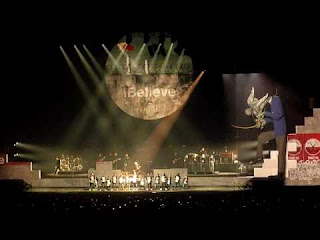 And Roger Waters did more! Much more! He asked for the presence of a project of social inclusion for kids to be with him on stage.

Sixteen ethnic kids from "Associação Moinho da Juventude da Cova da Moura" (near Lisbon) were on stage in a special participation with Roger Waters and his fourteen musicians. 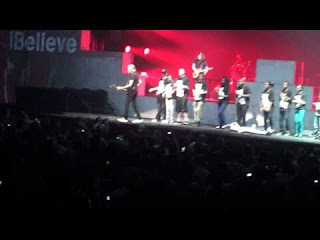 
Whassysa, social assistant, 27 years old, that motivated those kids to participate in such an important concert, told media that the choral group has only a month and kids and teenagers (8-16 years old) were very excited about their participation in the concert. 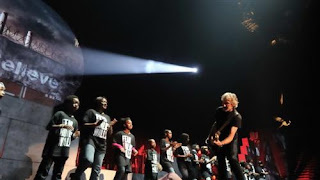 Kids (boys and girls) were so motivated - said Whassysa - that they were not missing a single day in the rehearsal, during two weeks.


They did not know the lyrics, even less English language. And they learned the lyrics in English.


The video below is in Portuguese language, but you have the gesture language to follow it...


Kids engaged very seriously in the project, they made some research about Roger Waters and Pink Floyd. It was the first time that they heard about The Wall, Roger Waters or Pink Floyd.


And March 21-22, 2011 when the classical theme ‘Another Brick in the Wall - Part 1’ began, kids  appeared on stage singing. Watch the video below:

What an audacious project to change the future of Cova da Moura young people. Roger Waters welcomed them on the stage!


It was very kind of him to invite a choral group of vulnerable young kids to participate in the concert.


We all know the importance of Music as social inclusion for kids. There are fantastic projects all over the world! And Cova da Moura project is one of them!

Music has the potencial to achieve social transformation of vulnerable kids.


The success of this participation and the work of the cultural assistant aim the long-term  – including hopes that children will be driven towards higher educational achievement and, ultimately, out of poverty – are impossible to evaluate at the moment! But it had an overwhelmingly positive effect on the children involved, for sure.


The holistic immersive approach of music (rock, pop, classical) and the engagement of important and experencied musicians is central to achieving significant transformation, particularly to the lives of the most vulnerable children.

Music as social inclusion for kids by G-Souto is licensed under a Creative Commons Attribution-NonCommercial-ShareAlike 3.0 Unported License.