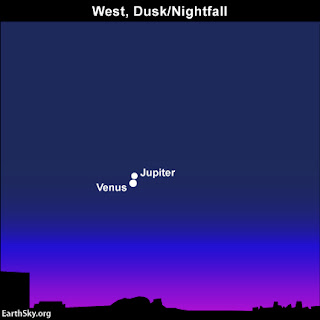 Today, tuesday 30 June 2015, Venus will come neck-and-neck with Jupiter. Anyone who pays even cursory attention to the evening sky has surely noticed that the two brightest planets, Venus and Jupiter, have been drawing closer together in the west in the evening twilight.
Tonight, at 2:17 pm Universal Time or 10:17 am E.T., the two planets will be at their closest. We can see this unusual sight, known as a conjunction, from just about anywhere in the world.
This spectacle must be some kind of omen. Well, yes, it's a sign from the heavens to get outside and look! As my S&T colleague Alan MacRobert points out, "a spectacular conjunction like this often gets people started in our wonderful pastime." 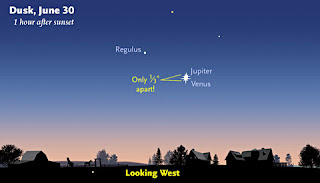 Some information:
At the beginning of June, the two planets were 20° apart in the sky, about twice the width of your fist held at arm's length.
Week by week, Jupiter and the stars behind it have gradually slipped lower in the evening twilight. But Venus, due to its rapid orbital motion around the Sun, has stayed high up.

The conjunction of the two planets has been building during the month of June and will culminate in a spectacular display on June 30.
“Every night in June, the separation between Venus and Jupiter will visibly shrink,”
NASA
A conjunction is when two or more objects appear very close together on the sky.

Where to look for it ?

The optimal viewing location, according to Jackie Faherty, an astrophysicist at the American Museum of Natural History in New York, is one where w the sun sets just as the planets approach one another. Complete darkness is not necessary to see these bright objects, but it helps.

Pat Hartigan, an astronomer at Rice University, says "the conjunction on June 30 is the best one we will have for over a decade, rivaled only by one on March 1, 2023, which will not be not quite as close."

The last event was Summer solstice, last 21 June 2015. Some students were lucky and could join people all over the world.

Now, schools are closed in the most part of the world. It's summer break for students and some teachers.

However, teachers are in touch with students via Facebook or Twitter school email accounts, or even on blogs or educational websites (school or individual). 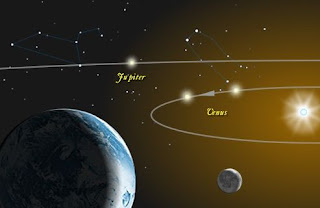 Chart via Jay Ryan at ClassicalAstronomy.com

So they can invite the students to join some skywatchers at national observatories of Astronomy, or go out with family observing the Venus & Jupiter tonight.

Ask students to make some shots or videos with their smartphones, tablets or
iphones to explore in Sciences curriculum after Summer holiday.

Hope you will enjoy to be a skywatcher tonight, June 30th and admiring the beauty of this awesome scientific event.

The following night the planets should be visible as well - their positions will just be slightly different.

"You’re not going to watch them speed past; it’s a slow-moving process,"

Hope I get lucky too!