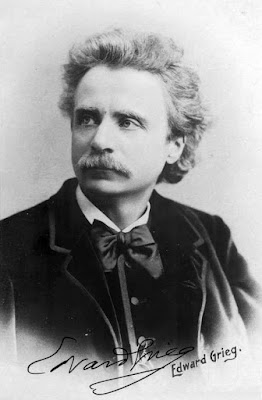 Edvard Hagerup Grieg wasborn on 15 June 1843 in Bergen, Norway. He is considered one of the leading Romantic era composers, and his music is part of the standard classical repertoire worldwide.

Here's anotther Doodle I could not miss. Music! Today, Google is celebrating the
172nd anniversary of the great musician an pianist, Edvard Grieg.

The Doodle appears on on Google homepage in Finland, Norway, and Denmark and honors the Norwegian composer. 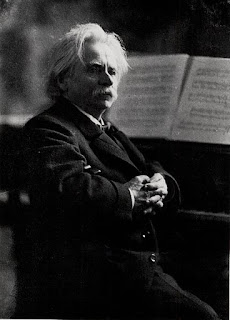 "He painted with notes."
Edvard Hagerup Grieg born on 15 June 1843 in Bergen, Norway. He is considered one of the leading Romantic era composers, and his music is part of the standard classical repertoire worldwide.

His use and development of Norwegian folk music in his own compositions put the music of Norway in the international spectrum, as well as helping to develop a national identity, much as Jean Sibelius and Antonín Dvořák did in Finland and Bohemia, respectively.

He traveled widely throughout Europe, and considered "his music to express both the beauty of Norwegian rural life and the culture of Europe as a whole."

He died on 4 September 1907. Its most advanced music school, Grieg Academy, its professional choir Edvard Grieg Kor, and even private companies Grieg Music. 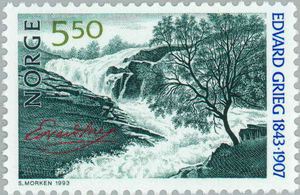 The Edvard Grieg Museum in Troldhaugen (Grieg's former home in Bergen) is dedicated to his legacy.

Explore the website to inspire your students and let them know better this great composer.

He painted the people, the scenery, and the moods of Norway. In the immortal Peer Gynt Suites, Grieg captured the rising of the sun, the lamenting of a death, and, in "The Hall of the Mountain King," the imagery of a chase scene. His works contained what are yet today readily recognizable "tunes". 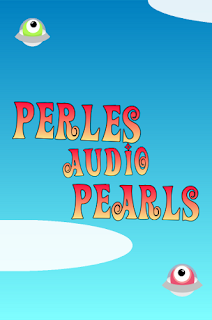 Now that we are talking about Music, I would let you know a game for students with visual disabilities: impaired vision or total blindness.

Perles Audio Pearls, an app by Ludociels pour tous that we can find on Google play.

A music game for one or two players (collaboratively) playable in the dark. Inspired on the Spielberg's movie "Close Encounters of the Third Kind" (1977) where aliens arriving on Earth communicated using melodies by a color system.

The game can be played in the dark and can be manipulated by people with visual impairments: visually impaired or complete blindness.  In a two player game, each person manipulates their own notes and tries to correspond their melody with their partner's. 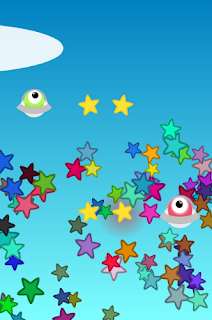 it just so happens that a little green man, comfortably installed in his flying saucer, trying to talk to a Pink little woman. Unfortunately, sound pearl face our two UFOs are all mixed. Handling the notes facing the aliens so that the two melodies match.


The game uses students listening and concentration skills. It has 16 levels, each level presents melodies increasingly long. The rating composing the melodies are reshuffled each portion to renew the life of the game. 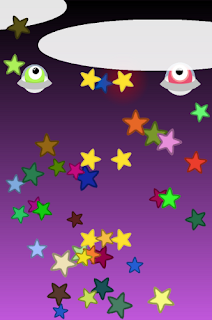 Students with with visual disabilities:

The game may be played in the dark and can be handled by students with visual disabilities:
Two players/students each one manipulates his own notes and seeks to match its melody to that of his partner.

This game uses students listening and concentration capacities.  There are 16 levels, each of which presents a longer melody.  The notes in the tunes are reshuffled in each level to elongate the game. 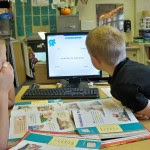 My usual readers know my thoughts about the importance of Arts in School Education, no matter the art field: Music, Dance, Literature, Painting, and other, all of them are essential to a complete and better education.

I pledge for Music in school curriculum. Music is the most inclusive art for all the students.

Beginning by talking about Grieg Doodle, you can include into your school curricula, no matter the curriculum.

It's also interesting to your students to explore the websites:
As I wrote before on my blog: Music has the potential to achieve social and psychological, and physical transformation of children and young people. Their sensibility will be accurate. They will be happy by playing music.

We must never waste such an opportunity as teachers! Captivating the major interests of our students on Music. 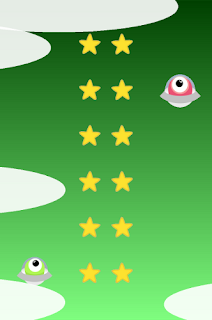 This game reminds me Bono at a concert some years ago when he invited a blind young man to play on the stage with U2.

Of course, kids and young adolescents love technology. And games/apps are important resources to include into our lessons.

How teachers and students can use it?
The app allows the students to work with musical sounds. Develops listening and concentration skills.

Note: Through the purchase of this game, you support the actions of the non-profit organization Ludociels for All who strives to create educational video games for people in situations of social exclusion, such as the handicapped or school dropouts. You can see the details of its actions and achievement at its website

Systems: Android.
You can see the details of its actions and achievement at its website

"One good thing about music, when it hits you, you feel no pain."

Hope you like Perles Audio Pearls as you liked Oratio's Flute Master and your students with visual disabilities enjoy to learn playing the game. Another interesting resource to include into your lessons if you teach Music or not at school

Schools : Music & apps : Apps for students with visual disabilities by G-Souto is licensed under a Creative Commons Attribution-NonCommercial-NoDerivatives 4.0 International License.