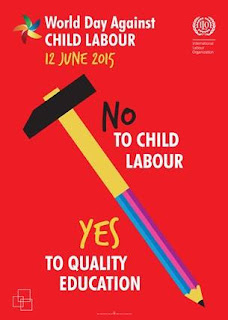 NO to child labour – YES to quality education!

"120 million children between the ages of 5 and 14 are involved in child labour, with boys and girls in this age group almost equally affected."

Today is World Day Against Child Labour. June 12th is intended to serve as a catalyst for the growing worldwide movement against child labour, to highlight the plight of child labourers and what can be done to help them. 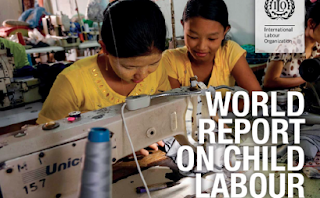 More than 168 million children are trapped in child labour. More than half of them, 85 million, are in hazardous work. This persistence of child labour is rooted in poverty and lack of decent work for adults, lack of social protection, and a failure to ensure that all children are attending school through to the legal minimum age for admission to employment.

The International Labour Organization (ILO) launched the first "World Day Against Child Labour" in 2002 to highlight the plight of these children. 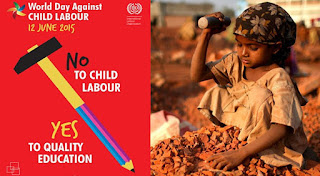 Child labor includes children who are forced to take part in armed conflict, such as child soldiers and girls taken as "wives" for soldiers and militia members.According to Anti-Slavery International, there are around 300,000 child soldiers involved in over 30 areas of conflict around the world.Child labor among girls fell by 40 percent since 2000, compared with 25 percent for boys.

26% of all forced labourers are children, the majority found in Asia and the Pacific, and Africa, but every country and region of the world is affected by child slavery.

Hundreds of millions of young people, girls and boys throughout the world, are engaged in work that deprives them of "adequate education, health, leisure and basic freedoms", violating their rights.

Among these children more than half is exposed to the worst forms of child labour such as work in hazardous environments, slavery, or other forms of forced labour, illicit activities such as drug trafficking and prostitution, as well as involvement in armed conflict.

Social protection is both a human right and makes sound economic and social sense. Social protection enables access to education, health care and nutrition and plays a critical role in the fight against child labour.

The World Day Against Child Labour this year will focus particularly on the importance of quality education as a key step in tackling child labour.

It is very timely to do so, as in 2015 the international community will be reviewing reasons for the failure to reach development targets on education and will be setting new goals and strategies. 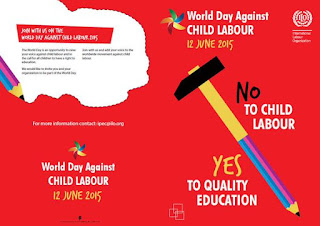 On this year’s World Day Against Child Labour ILO call for: 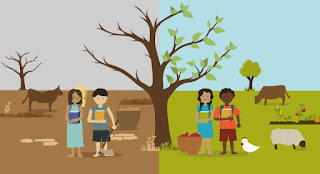 "Children whose education is denied or impeded by child labor enter adolescence much less likely to have the competencies and skills needed for securing decent work, and much more likely to be vulnerable to joblessness or low paid, or insecure work in hazardous conditions. Their vulnerability is frequently exacerbated by related factors such as health problems stemming from their premature involvement in work. The poor job prospects of former child laborers can continue into adulthood, making it more likely that their work experience as adults will be characterized by low earnings, insecurity, and unemployment spells,"

Some days ago, I wrote about Enfants victimes d'exclusion sociale. Reading the numbers of Unicef Report in France, I realized once more how important it is to draw attention to situations such as childrens and young adolecents boys and girls who live far from school education, in real conditions against their human rights.

Teachers and students worldwide are speaking out against child labour in the classroom and taking action to raise further awareness of this issue out school.

They are spreading knowledge among their peers, acting as a voice for those children whose rights are not respected and calling on decision-makers to act urgently to protect children in danger.

Teachers have a crucial role on the alert of poverty or child labour cases among their students.

Numerous tools and initiatives exist to inspire and motivate students of all ages, from primary school through to university, on the subject of child labour.

Display the video above in the classroom and some photos on the theme and invite the students to talk about what they are watching;

Ask students to search on child labour in your own country, comparing with other countries;


On the website ILO you will have some good material and you can find activities from all around the world.

Of course this event is not for a day. As a teacher you will prepare the activity for 3-4 days, explaining your students the symbology of special days.

And what about the teacher role? We will facilitate the activities in the classroom. Teachers will organize the activities for 3-4 days and ask the collaboration of the students.

We will answer to questions, guide students with special needs, work with small groups, guiding the learning of the class and each student individually.
Since the role of the teacher has changed, more as a tutor or facilitator than a deliverer of content, you and I have the privilege of observe how students interact among classmates.

As we have time to roam around the class, we notice the students are developing their own collaborative work.  Students are helping each other learn instead of relying on the teacher as the sole disseminator of knowledge.
It is magical to observe that ! And at the end you will have some creative activities all them elaborated by the students.

When we respect our students in this way, they usually meet expectations. They realize - it takes time - that we are there to guide them in their learning instead of being a classical educator.

It is important they are able to handle devices : tablets, smartphones, other.

Our students will participate actively in the World Day Against Child Labour  for sure, and they will become engaged young citizens.

They will understand how lucky they are to come to school every day.

"Children are not little adults," (...) "Hazardous work cannot be acceptable for children because of basic biology… they are physically and mentally different."

I believe NO child should be forced to work and striped of their childhood! Join the call to fight child labour with quality education.

Éducation : Parlons d'enfants victimes d'exclusion sociale by G-Souto is licensed under a Creative Commons Attribution-NonCommercial-NoDerivatives 4.0 International License.
Posted by G-Souto at 9:30 AM