Education: Stay Up All Night & Watch the Lunar Eclipse! 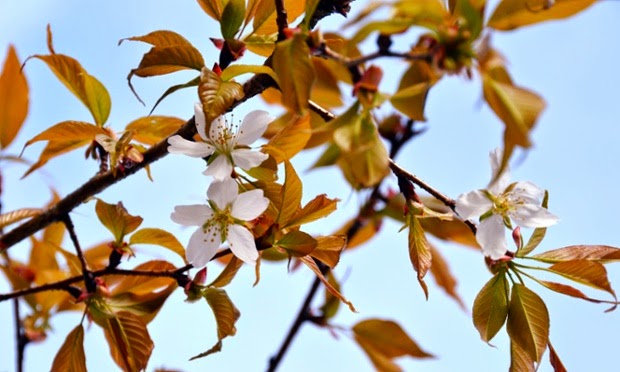 You heard the story about a cherry tree bloom grown from a cherry pit that spent time on board the International Space Station (ISS), at the Ganjoji temple in Gifu city, central Japan.
The flowers bloomed years earlier than expected, with more petals than on a normal tree. Amazing !

Spring is here and ready to capture the world's attention with a total lunar eclipse tonight, April 15.
The eclipse will begin early on the morning at approximately 2 a.m. EDT. If you have questions our are just curious about the eclipse, this will be your chance! The eclipse will coincide with nighttime in North America. How lucky !

Tonight, on April 15th, 2014 there will be a total lunar eclipse visible from North America. Noah Petro, LRO Deputy Project Scientist, discusses this unique event and what effect it will have on the Lunar Reconnaissance Orbiter (LRO).

A total lunar eclipse is expected at this time, a phenomenon that occurs when the Earth, moon and sun are in perfect alignment, blanketing the moon in the Earth's shadow.
Although lunar eclipses happen multiple times in a year during a full moon, this eclipse will be a particularly unusual viewing opportunity for North America.

Since the Earth's Western Hemisphere will be facing the moon during the eclipse, the continent will be in prime position to view it from start to finish. In addition, the eclipse will coincide with nighttime in North America. The entire continent won't be able to witness a full lunar eclipse in its entirety again until 2019.

In Portugal, we were lucky on June 2011, the lunar eclipse 2011. Tonight, the Observatório Português de Astronomia says the eclipse will be visible only partially in briefly until sunrise.

The most favorable region to observe the eclipse is at Azores, on the western part of the territory. To have complete information, visit the official website. 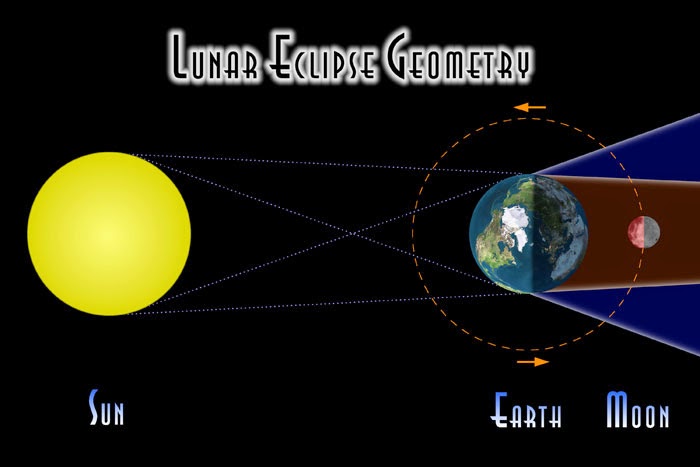 Geometry of the Sun, Earth and Moon During an Eclipse of the moon.
Credits : Fred Espenak
http://cdn-7.nikon-cdn.com/

Education:
This time, schools are closed in the most part of European countries,as well in North America, Australia, and most countries in the world. I could not be informed about Asian countries, except Japan. It's Easter holiday also known as Spring holiday.

However, teachers are in touch with students via Facebook or Twitter school accounts, or even on blogs or educational websites (schools or personal).

So they can invite their students to join astronomers on NASA Television or skywatchers at national observatories of Astronomy, observing the lunar eclipse tonight.

Skywatchers in the Americas will be able to catch the rare celestial show as Earth's shadow falls across the Moon.

Oh, my ! Ask students to make some photos or little videos with their smartphones to explore in Science classroom.

After Spring holiday, on the 21-22 April, teachers and students can debate their experiences.

Don't forget ! Invite your students to get great images of a lunar eclipse. They can share them on NASA's Lunar Eclipse Flickr group.

The eclipse begins about 2 a.m. EDT and will last about three hours. The eclipse's peak, when the moon will enter Earth's full shadow, or umbra, will occur at 3:45 a.m. The moment of greatest eclipse will occur at 08:45 BST.

Some resources:
Hope you will enjoy to be a skywatcher to admire the beauty of this scientific event.


Three further eclipses will occur during 2014: an annular solar eclipse on 29 April, a total lunar eclipse on 8 October and a partial solar eclipse on 23 October.
For those who are lucky, stay 'Up all Night' to watch the Lunar Eclipse !
G-Souto
14.04.2014
Copyright © 2014G-Souto'sBlog, gsouto-digitalteacher.blogspot.com®

Education: Stay Up All Night & Watch the Lunar Eclipse by G-Souto is licensed under a Creative Commons Attribution-NonCommercial-NoDerivatives 4.0 International License.