Music as social inclusion for people with disabilities : U2 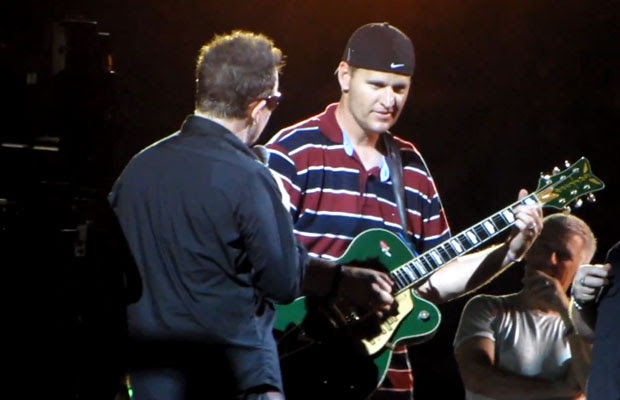 As an educator, I really can feel how important this kind of actions are for young people with disabilities: social, physical or intellectual.

Roger Waters had a wonderful attitude in Lisbon! Before coming to a concert, he asked for the presence of a project of social inclusion for kids to be with onto stage during his concert, last April 1, 2011. And it was fantastic to watch the enthusiasm of those kids. Please read here 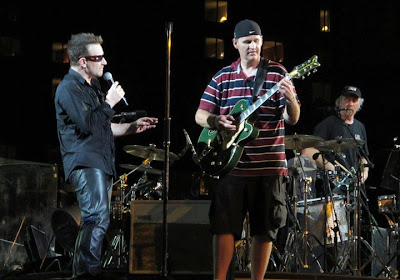 Now, Bono and U2 made the same! During Nashville concert, Bono invited a 32-year old blind fan onto the stage to play a song with U2.

Admitting he was nervous, Bevell took the guitar and played U2's "All I Want is You", and was joined on vocals by Bono, and then by the entire band.

“It took me a second," Bevell told a the Sun Herald, "I had no idea what was going on because in my mind they had left and walked off. I had no idea Bono was still there. Instantly, I was lifted over that front rail and hoisted on stage by the security guards. Before I knew it, I could hear Bono’s voice saying, ‘what do you want to play man?’

The video has been posted on several YouTube accounts, and one comment left on the video below seems to give some context to the situation:

"This is our good friend Adam Bevell of Mesa, Arizona. He is always playing or listening to U2. He's been to tons of concerts like 12 -13 or more, this was a life long dream of his!"

After the performance, Bono gave Bevell his guitar - a very rare green Gretsch Irish Falcon - and said to the young man to keep it.

Watch now the video below:

My goal is to show educators, parents and fellows that inclusion is possible for kids and citizens with disabilities and highlight actionable opportunities in the different curricula in school or in the different acts in society  and Citizenship organisations. (...)

Music, Sports are offering good experiences for inclusion. I wrote several posts about it. Please search on this blog.

In this case, the holistic immersive approach of music (rock, pop, classical) and the engagement of important and experienced musicians is central to achieving significant transformation, particularly to the lives of the most vulnerable children and citizens.

"These kids, or citizens are denied the right to become productive members of their societies, which is a loss to the societies as well as the kids and citizens,”

Music as social inclusion for people with disabilities by G-Souto is licensed under a Creative Commons Attribution-NonCommercial-ShareAlike 3.0 Unported License.