It's about Twiter and Poetry!


Two days ago happened to be both World Poetry Day and the fifth anniversary of the moment when Jack Dorsey sent out to the world the first message using the service that soon became known as Twitter.


"Over the last five years, Twitter has changed the way many communicate online, offering a concise way to interact with large crowds of people. It has become an invaluable tool for spreading breaking new."


"Poetry contributes to creative diversity, by questioning a new our use of words and things, our modes of perception and understanding of the world.!"


So, don't you think that they have a lot in common in their specific way? Let's see! 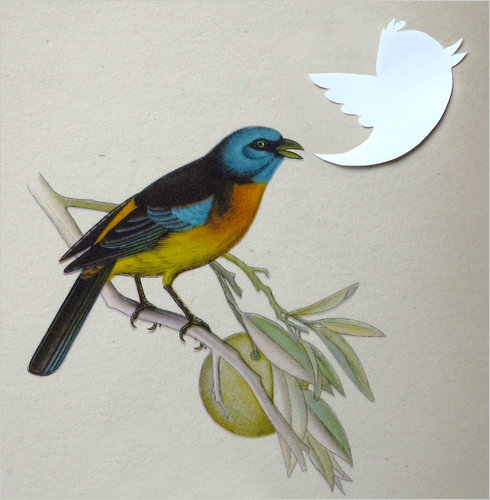 
There is some evidence that literary is flowering of Twitter. The Twitter haiku movement is well under way. Science fiction and mystery enthusiasts especially have gravitated to its communal immediacy. And even litterateurs, seem to be warming to it. Read more here


This idea gives us an awesome way to introduce Poetry in Literature curriculum.


Students love the narrative text! Poetry, it's different! Not all the students feel attracted to write Poetry! It's important to motivate students using different strategies! The Twitter calling bards  is a good motivation, believe me!


"To celebrate, The Times asked its readers and followers to compose short poems on Twitter using the hashtag #poetweet. Hundreds of poems, many of them brevity-friendly haiku, flooded the Twittersphere. Below, a few of the submissions. More Twitter poems can be found by searching #poetweet at search.twitter.com."


So, as you see, we can be always creative and follow our creativity to put into our lessons.


I defended the idea of using Twitter in Literature curriculum in my presentation and theme discuss "Creative learning in the digital age" during the workshop in EFQUEL  Innovation Forum Lisboa 2010.

Twitter's rule makes the students take discipline on their thematic homework. They become better in writing and do appreciate the importance of the word semantic.

Some students were bad writers and had an awful time getting their thoughts down properly and in a concise way. Twitter's rule really helps students. Why not improve both things.

Keeping ideas in 140 characters or less teach students to be concise in writing.

Poetry! Even better! How interesting to ask students to write a poem within Twitter's text limit of 140 characters!


The 21 March, I was on my account on Twitter and I followed the hastag #poetweet! So interesting!


Well! Go on! Share the idea with your students! They will love it! It might be the start to a poetry contest for students on Twitter , for example?

Nancy White & Suzy - An Intro to Twitter from CommunityMatters on Vimeo.

To introduce Twitter to younger students what a better way than the video that I discovered recently via Nancy White! It's so cute and cuddly the way these 2, Nancy and Suzy really break down what Twitter is and helps explain it to students.

I met 'virtually' Nancy White during my participation at the conference Where for Digital Identity on 07 January 2010, in London, an event hosted at the Conference Center of the British Library.

She made her presentation 'virtually' between Steven Warburton and Shirley Williams. Nancy's points of viewwere very interesting. Since there, I follow her on Twitter.

On the video above, Nancy White explains in a marvellous and creative way how students might use Twitter.

Twitter is a viable social media to discover and discuss in real-time events. At the same time is a good open resource to take part you and your students in a really meaningful educational  way.

"The confluence of these two events - both having to do with humanity’s deep and sometimes uncontrollable need to communicate - is occasioning a fresh outpouring of opinion about the future of Twitter as a vehicle for real creativity."