Mario Laginha admits that the way he has been inspired and transformed the music of the Polish composer is an 'heresy' that 'exudes respect' for Chopin.

It's true! The pieces played exuded an intimate and deep respect for Frédéric Chopin. Only a connaisseur of classical music could transform with such a gifted talent Chopin. Laginha is an awesome musician. 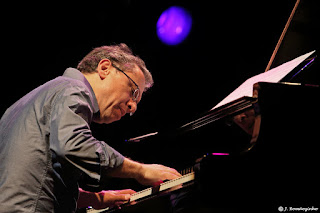 
Mario Laginha is a young musician who completed his classical studies at the Conservatorio de Musica of Lisbon with the highest honours.

Mario Laginha, classical composer, but most of the time jazz composer, is a well-known pianist, and he is one of jazz music’s leading lights, at the moment in Portugal. He has been distinguished with several awards for his talented work.

Piano masterpieces of Fryderyk Chopin, reinvented by Mario Laginha are included on his new album 'Mongrel Chopin' (ONC, Produções Culturais, 2010) a project commissioned by the Metropolitana and Sao Luis Theater (Lisbon) to participate on the world celebrations of the 200th Anniversary of Chopin -Chopin 2010 - Celebrations of Chopin Year. 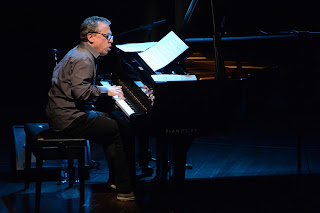 
A great composer and pianist to introduce to your students of classical and jazz music.

This CD could be an interesting resource to motivate music students - piano - to admire classical and jazz and understand that there are no frontiers in Music.

Laginha started the performance with the 'Nocturne op.48 nr.1' in which he built a wonderful melody at the piano sorrounded smoothly by drums and bass. There’s something magical seeing Mario Laginha playing the piano! He is an amazing pianist. His 'touch' ranging from a silky smooth melody to an intimate remembering my piano studies and Chopin masterpieces.

He is a gifted musician and owner of an increadible sensibility. At the same time is very kind. He has a great heart!

The audience was so touched, that it couldn't interrupt the applauses, as it's usual at jazz and classical concerts. The spirit of Chopin was there!

Mario Laginha said that he left space for improvisation looking to approximate the music of Chopin 'of his musical universe'.

'Improvisation was also a mark of Chopin', said Laginha and he classified Fryderich Chopin as 'one of the greatest improvisers of all time.' 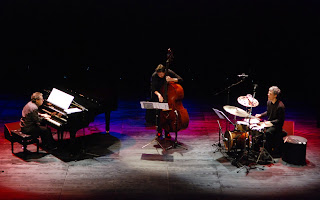 This was a performance in which the encore was admired once more showing Mario Laginha Trio talent and sympathy.

It happens to be one of the greatest young jazz Portuguese musician. The audience deeply applauded his talent! And the talent of the two other musicians!

The Mongrel Chopin of Mario Laginha Trio, edited on November 22, 2010 was recently awarded "Best Album of the Year" by the 'Portuguese Society of Authors' (SPA).

You can listen the Fantasia op.49 on Facebook of Casa da Musica.

Mario Laginha and his trio brought at Casa da Musica the soul and nostalgic memories of his piano masterpieces. They performed in a poetic way.

"How hard it is to 'fully' grasp the cosmos of this music! The entire Poland is here: her national drama,her everyday life, her feelings, the cult of beauty in a human being and the humanity, the noble and proud character of the country, her ponderings and songs."
Boris Asafiev


Video on YouTube: The photos of the video are by Zeev Parush. You can know better his work at www.zeevparush.com

The video was made with the simple aim to let people know about the work of the musicians, photographer and artists, whose works are shown.

No profit is intended or obtained. If the copyrights owners wish to oppose to its exibition on YouTube, just leave a message on the video, and i'll imediatly remove it!

Schools : Mario Laginha, a jazz tribute to Chopin by G-Souto is licensed under a Creative Commons Attribution-NonCommercial-ShareAlike 3.0 Unported License.