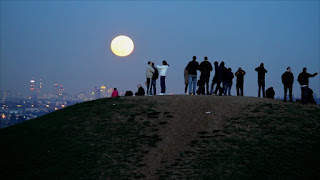 
"The last full Moon so big and close to Earth occurred in March of 1993," says Geoff Chester of the US Naval Observatory in Washington DC. "I'd say it's worth a look."
Full Moons vary in size because of the oval shape of the Moon's orbit. It is an ellipse with one side (perigee) about 50,000 km closer to Earth than the other (apogee): diagram. Nearby perigee moons are about 14% bigger and 30% brighter than lesser moons that occur on the apogee side of the Moon's orbit. 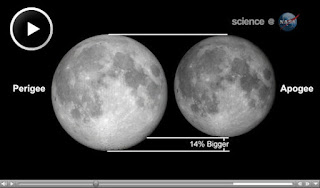 Contrary to some reports circulating the Internet, perigee Moons do not trigger natural disasters. The "super moon" of March 1983, for instance, passed without incident. And an almost-super Moon in Dec. 2008 also proved harmless.
"Okay, the Moon is 14% bigger than usual, but can you really tell the difference? It's tricky. There are no rulers floating in the sky to measure lunar diameters. Hanging high overhead with no reference points to provide a sense of scale, one full Moon can seem much like any other."
Dr. Tony Phillips | Credit: Science@NASA
Education:
That's a good video to display in Sciences lesson next Monday to explain perigee moon  to the students.