Halloween
https://s-media-cache-ak0.pinimg.com/
Halloween! We all know that students love Halloween! So every educator has one or two activities to do in the classroom on Halloween.
Over the centuries, Halloween's already weathered a lot of changes, and I've summed some activities, two games and other resources to make your school students happy and have fun.

"Straddling the line between fall and winter, plenty and paucity, life and death, Halloween is a time of celebration and superstition."

Halloween is thought to have originated around 4000 B.C., which means Halloween has been around for over 6,000 years and is one of the oldest celebrations in the world.

It is thought to have originated with the ancient Celtic festival of Samhain, when people would light bonfires and wear costumes to ward off roaming ghosts.

On Samhain eve - what we know as Halloween - spirits were thought to walk the Earth as they traveled to the afterlife. Fairies, demons, and other creatures were also said to be abroad. 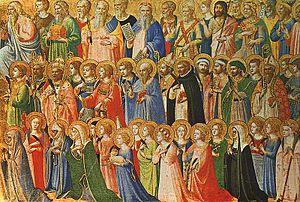 Samhain was later transformed as Christian leaders co-opted pagan holidays. In the seventh century Pope Boniface IV decreed November 1 All Saints' Day, or All Hallows' Day.
The night before Samhain continued to be observed with bonfires, costumes, and parades, though under a new name: All Hallows' Eve—later "Halloween."
In the eighth century, Pope Gregory III designated November 1 as a time to honor all saints and martyrs; the holiday, All Saints’ Day, incorporated some of the traditions of Samhain. The evening before was known as All Hallows’ Eve and later Halloween. 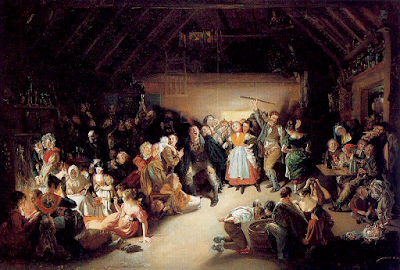 The Christian holiday is likely rooted in the Celtic holiday, Samhain, or a number of other pre-Christian harvest festivals.

Over time, Halloween evolved into a secular, community-based event characterized by child-friendly activities such as trick-or-treating. 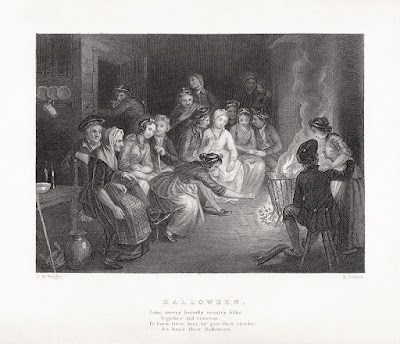 The word appears as the title of Robert Burns' Halloween (1785), a poem traditionally recited by Scots. c

It was brought to North America in the 1800s by immigrants from Europe who would celebrate the harvest celebration around a bonfire, sharing ghost stories, singing, dancing and telling fortunes.

Anoka, Minnesota, may be home to the United States' oldest official Halloween celebration. Beginning in 1920, the city began staging a parade and bonfire.

In a number of countries around the world, as the days grow shorter and the nights get colder, people continue to usher in the winter season with gatherings, costumes and sweet treats. 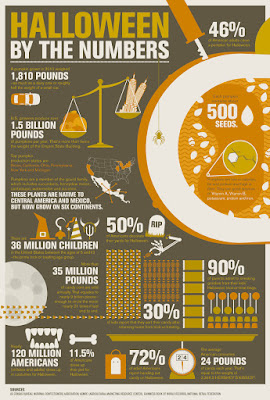 Halloween in the USA infographics
http://www.history.com/
History as well has different resources that you can include into your school curriculum telling the History of Halloween: videos, pictures, interactives, other.

Halloween is a cross-curricular subject and students can develop their creativity in different matters. At the same time, they will evolve curricular skills.
The two articles on the National Geographic and History include a wonderful list containing useful information and resources that educators can explore on their own way, according students profile they are teaching.
Students will be encouraged to make a critical research using tablets and smartphones. They will be encouraged to be creative in their activities, have fun and learn about urban culture and traditions.

Gadgets help to prepare students to thrive in an increasingly digital world. And they love it! They are effective and vivacious in the activities that teachers propose for the course.

A cross-curricular project would be awesome.

Teachers will adapte the activities to the level they are teaching.

"This year’s Halloween Doodle follows freshman feline Momo on her mission to rescue her school of magic. Help her cast out mischievous spirits by swiping in the shape of the symbols above the ghosts’ heads. And you’d better pounce fast - the ghost that stole the master spell book is getting away!

Google Doodles are always super fun. This year’s Halloween one is no exception. Before I say something, you should go and check it out. No, seriously. Do it.
Adorable, right? The Google Halloween Doodle is an amazing mini game starring a little cat wizard at Magic Cat Academy.
In it, students play the protagonist, Momo the cat in a kind-of zoological Hogwarts. The game has you draw various shapes and lines to cast spells on ghosts and spirits as they try and get you - think Harry Potter. While they’re hard at work in the library, ghosts burst in, wrecking the place.

screenshot Google Doodle Halloween 2016
via TNW
https://cdn1.tnwcdn.com/
Students job is to fight them off. To do that, they’ve got to cast the right spell. This is done by drawing symbols that correspond with those shown above each ghost.
At first it is easy as only one symbol like a dash or an I appear. Soon though a ghost has a whole code on his head. This little game gets difficult pretty fast.
As students progress, the ghosts get tougher and faster, and it becomes a fast-paced fight to stay alive.

Students will celebrate Halloween by playing through five fun levels and beating devious boss ghouls along the way. 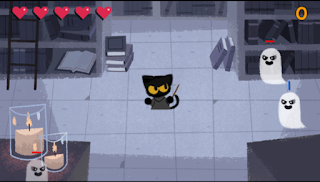 screenshot Google Doodle Halloween 2016
via TNW
https://cdn1.tnwcdn.com/
I had a lot of fun playing the game. It's a real nice treat from the Google Doodle team.
This game is especially great to play on a smartphone or tablet. A great game for students of any age.
It’s a ridiculously fun way to procrastinate at school, much like I’m doing now.
The inspiration for this year’s cat spell-casting game came from a real-life black cat named Momo (photo here) that belongs to Doodler Juliana Chen. It seemed like a good opportunity for a cat hero, since the winner of last year’s Candy Cup Doodle was Yellow Witch and her black cat.

Halloween is here, and Pokémon GO has its own treats to give out! Started October 26 until November 1, students can receive more Candies than usual. Every Pokémon they catch will award six Candies - twice the normal amount finding the game’s spookiest Pokemon: Drowzee, Hypno, Ghastly, Haunter, Gengar, Golbat and Zubat.

For returning students, there’s also a motivation to play pretty intensely for the next few days. Keeping with the Halloween theme, there are more treats everywhere, and players will get double candies for catching and transferring Pokémon, as well as quadruple candies for walking with their buddy Pokémon.
It’s all quite nice if your students are still playing Pokémon Go. Some spooky Pokémon will also be much more common leading up to Halloween. Be on the lookout for more of the following Pokémon on your trick-or-treat route:

For more Halloween fun, students can visit Pokemon.com/Halloween, where they can download Pokémon pumpkin stencils and share their festive photos using the hashtag #PokemonHalloween.
Note: Pay attention to the age of your students on this activity. 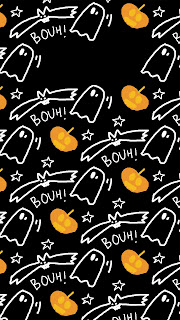 If your students want to change the screen of their iphones or tablets for Halloween, they can download from here. I think girls will be more enthousiastic about that than boys. The Raven by Edgar Allen Poe

Once upon a midnight dreary, while I pondered, weak and weary,
Over many a quaint and curious volume of forgotten lore—
While I nodded, nearly napping, suddenly there came a tapping,
As of some one gently rapping, rapping at my chamber door.
“’Tis some visitor,” I muttered, “tapping at my chamber door—
Only this and nothing more.”

Of course in the next lessons you will study the poem with your students,right?

Schools : It's Hallwoeen : Let's learn and have by G-Souto is licensed under a Creative Commons Attribution-NonCommercial-NoDerivatives 4.0 International License.
Posted by G-Souto at 8:00 AM