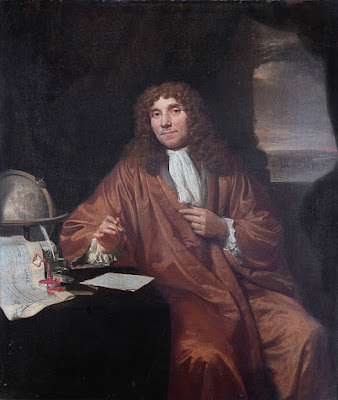 Antonie Philips van Leeuwenhoek
portrait: Jan Verkolje/ Rijks Museum, NL
https://en.wikipedia.org/
Today, 24 October marks the 384th birthday of Antonie van Leeuwenhoek, credited with being the first microbiologist.
"... my work, which I've done for a long time, was not pursued in order to gain the praise I now enjoy, but chiefly from a craving after knowledge, which I notice resides in me more than in most other men. And therewithal, whenever I found out anything remarkable, I have thought it my duty to put down my discovery on paper, so that all ingenious people might be informed thereof."
Antonie van Leeuwenhoek, Letter of June 12, 1716*

Google Doodle 384th birthday Antony van Leeuwenhoek
https://www.google.com/doodles/
The animated Doodle shows the 'little animals' he discovered when looking at a drop of water from a lake through a microscope. Here's to celebrating a true visionary!
In the Doodle, a droplet of water falls onto a lens being held by van Leeuwenhoek. As he peers through it at the Google logo, the logo letters come to life to mimic the micro bodies he would have seen during that first experiment.
Doodler Gerben Steenks noted, "I chose to make it an animated Doodle to show the 'before and after' experience that Antoni van Leeuwenhoek had - looking through a microscope and seeing a surprising new world." 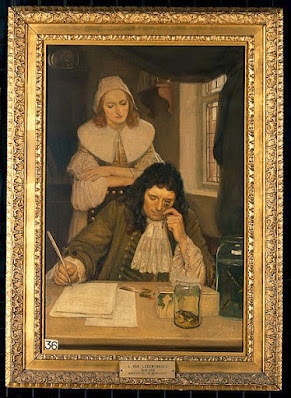 Leeuwenhoek with His Microscope

Welcome Library
https://commons.wikimedia.org/
Considered the first microbiologist, van Leeuwenhoek designed single-lens microscopes to unlock the mysteries of everything from bits of cheese to complex insect eyes.
While he might not be a household name today, the Dutch textile salesman ground and polished his own lenses, and was the first human to discover the existence of bacteria, single celled creatures, and spermatozoa.
Working from his dwellings above a marketplace in the Dutch city of Delft, his home-made lenses were so finely constructed that some of the organisms he discovered were not seen again for another century.

Leeuwenhoek was born in Delft on October 24, 1632. His father was a basket-maker, while his mother's family were brewers.

Antony was educated as a child in a school in the town of Warmond, then lived with his uncle at Benthuizen. In 1648 he was apprenticed in a linen-draper's shop.

Around 1654 he returned to Delft, where he spent the rest of his life. He set himself up in business as a draper (a fabric merchant). 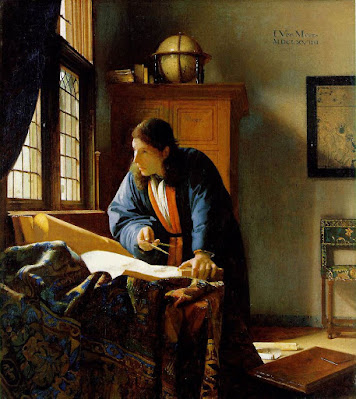 The Geographer
by Johannes Vermeer
https://en.wikipedia.org/

In 1676 he served as the trustee of the estate of the deceased and bankrupt Jan Vermeer, the famous painter, who had had been born in the same year as Leeuwenhoek and is thought to have been a friend of his. 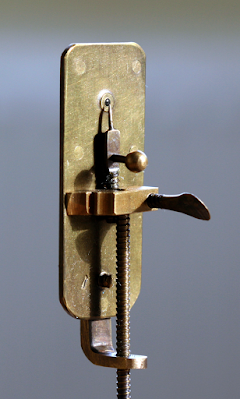 A replica of a microscope by Leeuwenhoek
https://en.wikipedia.org/

And at some time before 1668, Antony van Leeuwenhoek learned to grind lenses, made simple microscopes, and began observing with them. He seems to have been inspired to take up microscopy by having seen a copy of Robert Hooke's illustrated book Micrographia, which depicted Hooke's own observations with the microscope and was very popular.

A letter dated December 25, 1702, gives descriptions of many protists, including this ciliate, Vorticella: "In structure these little animals were fashioned like a bell, and at the round opening they made such a stir, that the particles in the water thereabout were set in motion thereby. And though I must have seen quite 20 of these little animals on their long tails alongside one another very gently moving, with outstretched bodies and straightened-out tails; yet in an instant, as it were, they pulled their bodies and their tails together, and no sooner had they contracted their bodies and tails, than they began to stick their tails out again very leisurely, and stayed thus some time continuing their gentle motion: which sight I found mightily diverting." Read more here 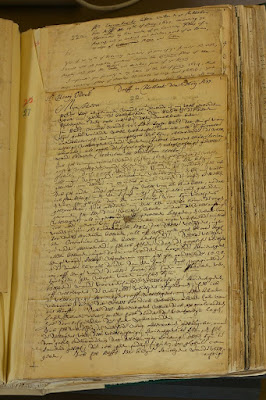 A 1677 letter from Leeuwenhoek to Oldenburg, with the latter's English translation behind
The full correspondence remains in the Royal Society Library
https://en.wikipedia.org/
By the end of his life, van Leeuwenhoek had written approximately 560 letters to the Royal Society and other scientific institutions concerning his observations and discoveries.
Even during the last weeks of his life, van Leeuwenhoek kept sending letters full of observations to London.
The last few contained a precise description of his own illness. He suffered from a rare disease, an uncontrolled movement of the midriff, which is now named Van Leeuwenhoek's disease.
He died at the age of 90, on August 26, 1723, and was buried four days later in the Oude Kerk (Delft).

"Today his invention is used by many scientists to identify the many cells that are existent and that we do not yet know of.

Without the microscope, people in the science/medical field wouldn't have any knowledge of biology considering cells are the basic unit of life."
As my usual readers know I include very often the Doodles of the day into school curricula. It's a wonderful motivation and to surprise students.

Doodles are the fun, unexpected, and sometimes spontaneous resources that we can include into some lessons to teach about famous scientists, writers, painters and other important facts.

Everyday we must include something captivating into our lessons, even we are teaching important skills in serious school curriculum.

Passion is what will make our students enter in the classroom waiting for something special in high school lessons, everyday.

Schools are very important environments of teaching and learning. Schools have an important role aiming to renew and reinvigorate global knowledge as they have the mission to educate children and adolescents as future citizens and good observers.

These digital resources are educational challenges to promote some good values near the new generations. Young students will be vigilant and will help to find new paths towards precious solutions to society and the planet. 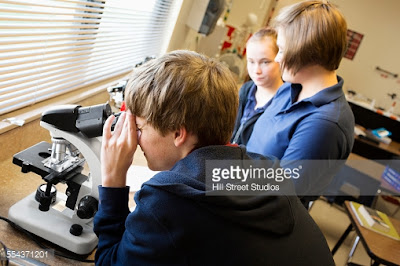 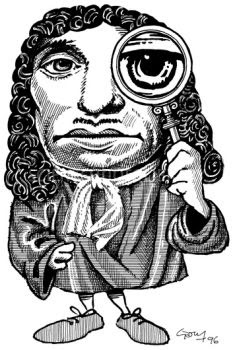 Lens on Leeuwenhoek
Resources:
Lens on Leeuwenhoek
http://lensonleeuwenhoek.net/
Overview The Curious Observer
http://lensonleeuwenhoek.net/content/overview-curious-observer
Anton van Leeuwenhoek
https://edu.glogster.com/glog/anton-van-leeuwenhoek/2d8a20hl5ei
"... Antony van Leeuwenhoek considered that what is true in natural philosophy can be most fruitfully investigated by the experimental method, supported by the evidence of the senses; for which reason, by diligence and tireless labour he made with his own hand certain most excellent lenses, with the aid of which he discovered many secrets of Nature, now famous throughout the whole philosophical World."*