October in review : the most read posts of the month 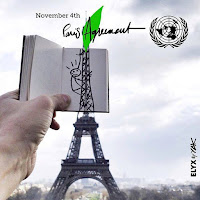 Today the 4 November 2016 is special, a seed of hope in humanity's future !

🌱🌍 I'm a green voluntary since the beginning of ClimateAction.

Today history has been made. The Paris Agreement to address climate change has entered into force!


"We are the first generation to really feel the effects of climate change – and the last that can prevent its worst consequences.
Today shows us what is possible when we join forces for our common future,"


The Marrakech climate change conference kicks off on Monday. Here's one way your students can involved.

Some days before the official opening of COP22, why don't they show UN why it is time to act?
To do so, invite students to post a selfie with what they want to preserve on the planet, use the hashtag #ActionTime and tag/identify COP22 in the picture.
Their selfie will be exhibited in the digital media zone during the Conference! They have a video invitation here

That's a wonderful new! After The COP21 in Paris from 30 November to 11 December 2015, working on the global agreement addressing climate change, this COP22 Paris Agreement is the best introduction I can have to the compilation of the most popular posts of October.

Schools: It's Fall Back Time! Oh no!

As you could see, Before the Flood (trailer) newly appointed United Nations Messenger of Peace on Climate Change, Leonardo DiCaprio embarks on the role of a lifetime.

"Journeying from the remote wastes of Greenland to the burning forests of Sumatra to the halls of the Vatican, DiCaprio explores climate change's devastating impact on the planet."


Well, I will be back to posting some ideas and educational resources.

October in review : the most read posts of the month by G-Souto is licensed under a Creative Commons Attribution-NonCommercial-NoDerivatives 4.0 International License.