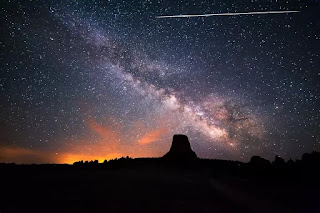 credits: David Kingham / Flickr
https://cdn0.vox-cdn.com/
Tonight greatest number of Eta Aquarid meteors will light up the predawn darkness on May 6, 2016.

In a dark sky, especially at latitudes in the Southern Hemisphere, the Eta Aquarids can produce up to 20 to 40 meteors per hour – or more.
These meteors are named "Eta Aquarid" because they appear to emanate out of the constellation Aquarius, which takes the shape of a dude pouring out a jug of water for eternity.
The meteors fly out from a star near the top of the constellation named Eta Aquarii.
We come across this patch of debris again in October, when the skies light up with the Orionid meteor shower 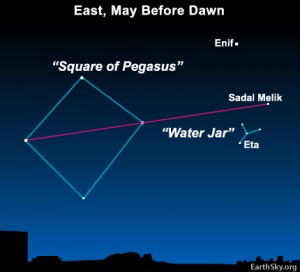 credits: EarthSky
http://en.es-static.us/
The Eta Aquarid meteor shower is usually active between April 19 and May 28 every year. Twice every year Earth collides with a ring of debris left behind by Halley’s comet, creating a pair of sibling meteor showers that can dazzle in the night sky.

2016 should be a good year for this shower, with the May 6 new moon guaranteeing deliciously dark skies for the 2016 Eta Aquarids.

The Eta Aquarids is one of the fastest meteor showers. Its specks pierce the sky at about 148,000 miles per hour.

The Eta Aquarids is one of two meteor showers created by debris from Comet Halley.
Halley's comet won't return to the skies until the 2060s. But tonight, you can catch a glimpse of it in the Eta Aquarid meteor shower.
The Earth passes through Halley's path around the Sun a second time in October. This creates the Orionid meteor shower, which peaks around October 20. 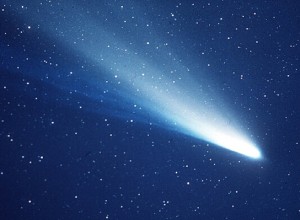 
Comet Halley takes around 76 years to make a complete revolution around the Sun.

This shower favors the Southern Hemisphere, ranking as one of the finest showers of the year. At mid-northern latitudes, these meteors don’t fall so abundantly, though mid-northern meteor watchers will catch some, too, and might be lucky enough to catch an earthgrazer – a bright, long-lasting meteor that travels horizontally across the sky – before dawn. The Eta Aquarids are mainly a predawn shower.

Earth is currently passing through a patch of debris created in the wake of the comet's tail. When that debris hits our atmosphere, it will burn up and scar the night sky as meteors in the predawn hours between May 5 and 6 (though you may be able to see a few meteors a night until May 28) . 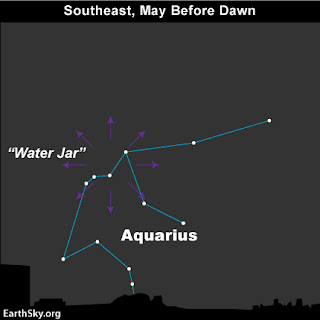 credits: EarthSky
http://en.es-static.us/
When and how should I watch the Eta Aquarids?
The 2016 Eta Aquarid meteor shower is expected to produce the greatest number of meteors in the wee hours before dawn on May 5 and 6. However, the broad peak of the Eta Aquarid shower may present a decent showing of meteors during the predawn hours on May 4 and May 7, too.
We don’t have to locate the Water Jar, or the radiant of the shower, to enjoy the Eta Aquarids. These meteors fly every which way across the sky, in front of numerous constellations. We can find a dark, open sky away from artificial lights, and sprawl out on a reclining lawn chair to comfortably watch the wondrous nighttime attraction.
The Eta Aquarids are viewable in both the Northern and Southern hemispheres during the pre-dawn hours.
The best time to watch these fast and often bright meteors is in the early morning hours, before the onset of morning twilight.
We must give at least an hour of viewing time for watching any meteor shower. Meteors tend to come in spurts that are interspersed by lulls. Also, it can take as long as 20 minutes for your eyes to adapt to the dark.
We don't need no special equipment to watch a meteor shower, but a little luck always helps. Meteor watching is a lot like fishing. Sometimes you catch a good number of them and sometimes you don’t. 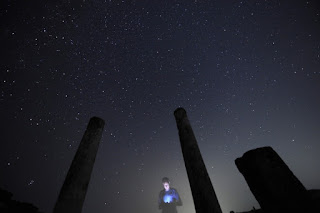 Most of us are excited about the Eta Aquarid meteor shower. Science teachers and students. Skywatchers as well.

I'm not a science pedagogue, but I love science and all the high technology near science.

Do you remember Science education : Ready to watch the Geminids shower last December 2015? Or Catching the Falling Stars, the Perseids last August 2015? Just awesome! A sky full of stars.

Teachers invite your students to be ready as skywatchers. Sciences curriculum will be enhanced with the help of another awesome event in the sky. The Eta Aquari meteor shower.

Do you want a better science lesson ? Two nights on live science. Wow! No special equipment.

During Eta Aquarid meteor shower skywatching, teachers, students can be skywatchers, and at the same time do some good shots, or videos with iphones, smartphones or tablets.

The event will be discussed next week in the classroom.


Teachers be prepared for the next great event! May 9 Mercury will cross the Sun!

Science education : Ready to watch the Geminids shower ? by G-Souto is licensed under a Creative Commons Attribution-NonCommercial-NoDerivatives 4.0 International License.