Poets and beggars, musicians and prophets, warriors and scoundrels, all creatures of that unbridled reality, we have had to ask but little of imagination, for our crucial problem has been a lack of conventional means to render our lives believable,"
Gabriel García Márquez, Nobel Lecture, 1982

Today, 6 March marks what would have been the 91st birthday of Literature Laureate Gabriel García Márquez, who was best known for his masterpiece 'One Hundred Years of Solitude'. 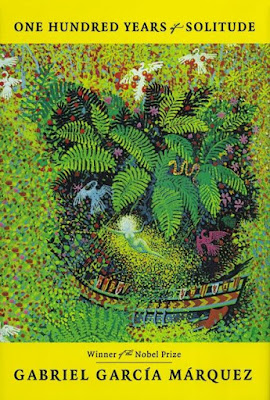 "One Hundred Years of Solitude," Gabriel Garcia Marquez's masterpiece, is unique. Nothing I have ever read conveys as it does the magic underlying the most quotidian events and gives even the most extraordinary occurrences an air of mystical inevitability."

García Marquez is special to me: few writers are so intimately associated with a literary style or an imaginative world.

"Depicted in today's Doodle is this magical city of Macondo, brought to life by the Colombian author, journalist, and Nobel laureate Gabriel García Márquez (affectionately known as Gabo throughout Latin America) in his book, One Hundred Years of Solitude."

The Colombian writer Gabriel Garcia Marquez is being celebrated by Google Doodle today on what would have been his 91st birthday.

Macondo is represented in the Doodle. It was one of the most important themes throughout Gabo's work.
The imagined city lies deep within the Amazonian jungle, separated from the world by a vast expanse of water. 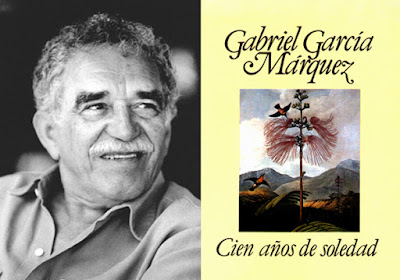 “We have had to ask but little of imagination, for our crucial problem has been a lack of conventional means to render our lives believable,”

Márquez, Nobel Lecture
for the Nobel Prize in Literature, which he won in 1982.

Gabo was born on March 6, 1927, in Aracataca in Colombia. His parents moved away when he was young and so it was his grandparents that shaped his early years.

"His grandmother, in particular, liked to "treat the extraordinary as something perfectly natural" and she became the source of Gabriel's knowledge of the magical, superstitious and supernatural view of the world."
He showed a passion for writing early on, and studied journalism at the Universidad Nacional de Colombia in Bogota. 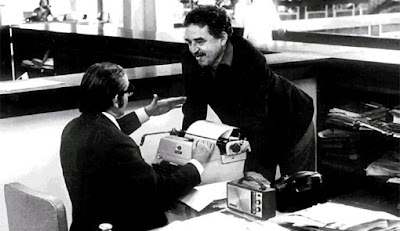 Márquez in El Espectador (journal)
1947
http://www.elcultural.com/revista/letras/
“I’ve always been convinced that my true profession is that of a journalist. What I didn’t like about journalism before were the working conditions,” 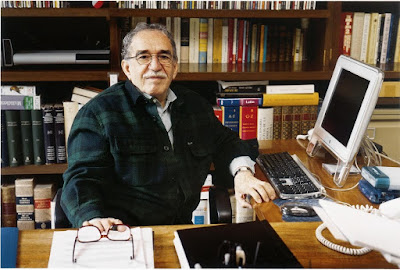 Gabriel Garcia Marquez
author: unknown
via Google images
After more than a decade as a reporter, columnist, foreign correspondent and editor, García Marquez moved his family to Mexico City and launched into his career as a novelist.

In 1967, he published One Hundred Years of Solitude, which catapulted his literary career to an international stage.

The book became a touchstone for magical realism, and a defining moment for literature in the 20th century. 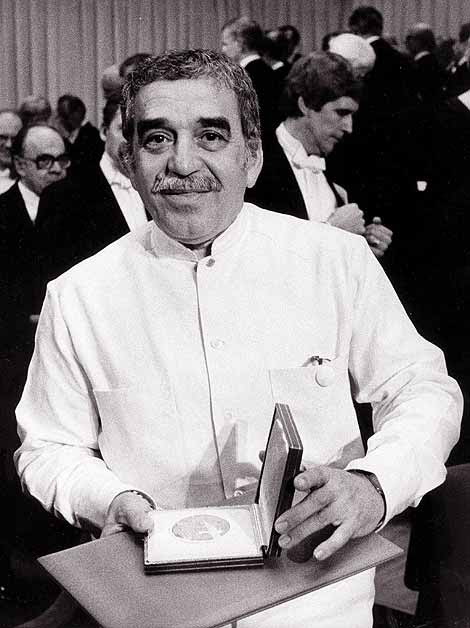 In 1982, he was awarde the Nobel Prize in Literature  "for his novels and short stories, in which the fantastic and the realistic are combined in a richly composed world of imagination, reflecting a continent's life and conflicts."

His book One Hundred Years of Solitude has become the definitive work of Magic Realism and is required reading in schools, not to mention his most famous book.

The novel has been translated into a large number of languages and has sold millions of copies. It is still being reprinted and read with undiminished interest by new readers. 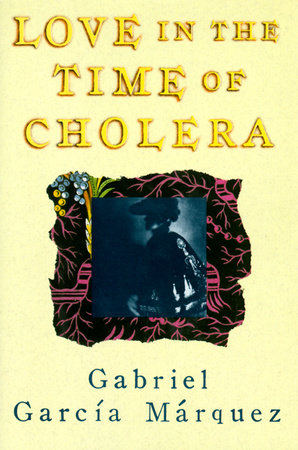 García Marquez became a Nobel laureate even before he wrote some of his other famous works, including Love in the Time of Cholera and Of Love and Other Demons.

His books deal with themes like solitude, eternal cycles, political disputes and civil wars, themes present in his life and the life of his country with distressful frequency. 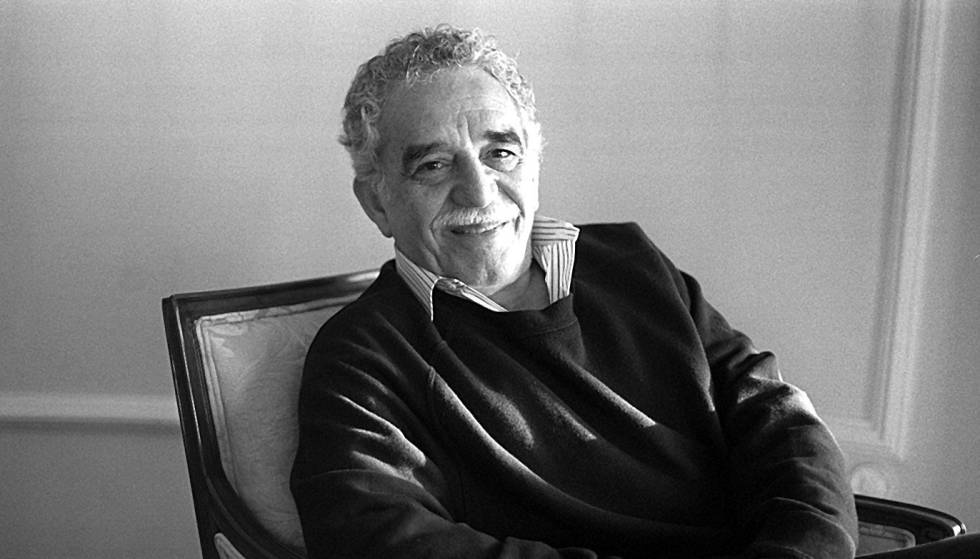 He was sometimes called the most significant Spanish-language author since Miguel de Cervantes, the 16th-century author of Don Quijote and one of the great writers in Western literature.

Indeed, Chilean poet Pablo Neruda told once that "One Hundred Years of Solitude" was "the greatest revelation in the Spanish language since the Don Quijote of Cervantes."


Garcia Marquez has also immersed himself into the cinema, helping directors to turn some of his books into films:

In different levels, students begin to read Gabriel Garcia Marquez and his magic realism, short or longer passages and full-length works. It would depend the level you are teaching in Languages curriculum.

Reading in English or Spanish? It will be your choice as teachers and the Language curriculum you are teaching.

Teachers will talk about literary analysis when appropriate. All Languages curriculum emphasize the development of reading, writing and critical thinking skills that lead to effective learning.

The activities also focus on the diversity, history, and culture of the country where Garcia Marquez was born.

Before beginning a book by Garcí­a Márquez, share with your students some of the hallmarks of the literary style known as 'magical realism' by exploring what it is not, through comparisons with familiar genres that also use unrealistic elements: fantasy, science fiction, and fairy tales.

Discuss the genre elements, their creative depictions display and talk about what these genres have in common and what they do not.

Some of your students have read Isabel Allende very popular among young people.

Ask students to divide in groups to participate in a collaborative creative discussion about Allende and Marquez reading some excerpts by both writers. 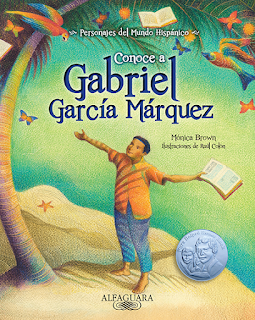 Younger readers:
Can you imagine a shipwrecked sailor living on air and seaweed for eight days? Can you imagine a trail of yellow butterflies fluttering their wings to songs of love?
Once, there was a little boy named Gabito who could. Gabriel Garcia Marquez is perhaps one of the most brilliant writers of our time. He is a tremendous figure, enormously talented, and unabashedly admired.
This is his story, lovingly told, for children to enjoy. Using the imagery from his novels, Monica Brown traces the novelist's life in this creative nonfiction picture book from his childhood in Colombia to today. This is an inspiring story about an inspiring life, full of imagination and beauty.