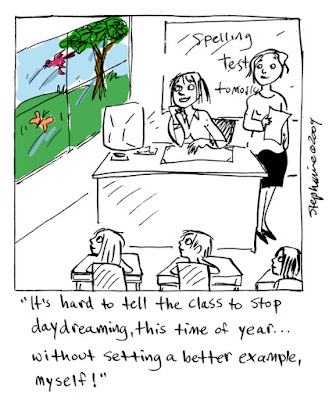 The summer solstice is the longest day of the year, a day falling around late June when there are approximately 17 hours of light. Wow!

The name comes from the Latin solstitium meaning “sun stands still”. It happens because the sun stops heading north at the Tropic of Cancer and then returns back southwards.
Weather forecasters are predicting a warm week with temperature highs of 24C. And it's true. Since Monday, we have in Portugal 30c. So good!

Education:
Summer solstice is a special day for many as it means the start of the summer. It has links to many ancient cultural practices as different cultures have celebrated it being symbolic of renewal, fertility and harvest.
Summer solstice, also called 'midsummer', has long been recognized and often celebrated by many cultures.

Every year, hundreds of pagans and non-pagans congregate at Stonehenge to see the sun rise in the morning and welcome in the summer.
Some pagans and druids perform a fire ritual to celebrate the occasion. This involves people with unlit candles forming a circle around a large central candle and lighting theirs off it one at a time.
Summer solstice links to many ancient cultural practices as different cultures have celebrated it being symbolic of renewal, fertility and harvest. 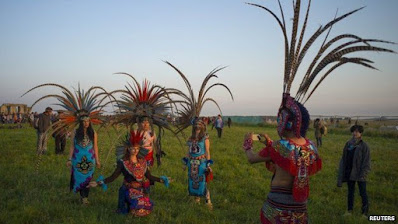 The Inca of South America celebrated the corresponding winter solstice with a ceremony called Inti Raymi, which included food offerings and sacrifices of animals, and maybe even people. Not on the photo above. Here some people chose to adorn with flamboyant Aztec costumes, along with smartphones. 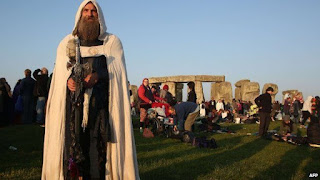 Stonehenge 2016
credits: AFP
https://ichef.bbci.co.uk/
Stonehenge (watch the BBC video) is the most popular place in the UK to celebrate the longest day because the prehistoric monument aligns to the solstices. The rising sun only reaches the middle of the stones one day of the year when it shines on the central alter.
It is thought the original builders of Stonehenge had taken giant bluestones from the Preseli Hills in Pembrokeshire to build the inner ring of stones at the monument for reasons that are not fully understood.

The English Heritage-run site attracted around 37,000 visitors this year. The summer solstice or Litha - which means a stopping or standing still of the sun - has a long tradition of attracting people to monuments to witness the sun rising on the longest day.
And now, somthing very important! 2016 is a special year. And why? Because the solstice coincides with the Strawberry Moon, a once-in-a-lifetime occurrence.
It is a full moon, which occurs in June, named by early Native American tribes. It is a full moon like any other, but marks the beginning of the 'strawberry season'. The two events coincide once every 70 years. Wow! I was not born seventy years ago. So it will be my first magical strawberry moon!

Tonight, the full moon will fall on the solstice for the first time since 1948. A rare combination of events as the Full Moon appears on the same night as the June Solstice. A Full Moon hasn’t occurred on the same day as the Solstice since 1948, and this time, Slooh is broadcasting it live.
During the show, Slooh Astronomers, Paul Cox and Bob Berman, will be on hand to discuss the rarity of such an event, and what exactly it means when they both occur at once.
Plus, as we look on live views of the Full Moon through Canary Islands telescopes, they will join the astrophotographer Robert Reeves, who will give a glimpse of his own stunning lunar photos, and help viewers and students understand how he captures the amazing views.
The broadcast starts at 8 p.m. EDT (0000 GMT Tuesday, June 21).
Students and sky watchers can watch the Slooh webcast, and ask questions via Twitter @Slooh.
Viewers can also submit questions via Slooh's chat room, where you can also control the StarShare camera live and snap night-sky views.
You can also watch the summer solstice full moon webcast on Space.com, courtesy of Slooh. Special guests who will discuss the importance of the summer solstice.
How sad! All these exciting events and summer school break in Europe and other continents began some days ago.
Only Only high junior schools (secondary education) and universities are in the middle of exams season.
So teachers can't enjoy this rare event with their students. May be after summer holidays they will be curious and ask you for some information about 'strawberry moon' and summer solstice that some of them, the younger one, will watch again here to 70 years?

However teachers can discuss this awesome event teaching winter solstice in December 2016.


"Astronomy has been important to people for thousands of years. The ancient construction known as Stonehenge in England may have been designed, among other purposes, to pay special honor to the solstices and equinoxes. These are the times and locations during Earth's journey around the Sun that we humans have long used to mark our seasons."

Teachers will consider the activities to every level or curriculum they are teaching.