Earth is getting its first chance for an up close and personal peek at Pluto, the ball of rock and ice orbiting at the furthest edge of our solar system.

Thanks to New Horizons, a thousand-pound space probe NASA sent spinning through space at 31,000 miles per hour. The probe’s interstellar jaunt spanned more than 9 years and 3 billion miles. What a journey !

The pictures New Horizons will send back to Earth are the first of their kind, painting scientists a more vivid picture of the far-off dwarf planet. Armed with these new insights, we’ll be able to pave a path for the next milestone in mankind’s journey of cosmic discovery. 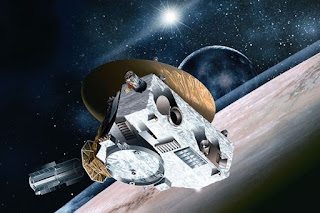 “The size of Pluto has been debated since its discovery in 1930. We are excited to finally lay this question to rest,”


New Horizons' flyby of 2,370km-wide Pluto is a key moment in the history of space exploration. 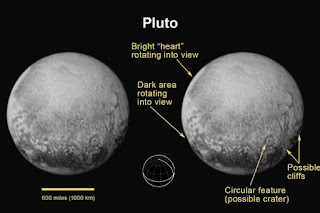 New data from NASA's New Horizons spacecraft has shown the planet has a diameter of 2,370km - fractionally larger than previously believed.
The data confirms Pluto to be the largest object discovered so far in the Kuiper Belt - the outer zone of the Solar System.
NASA notes there has long been difficulty figuring out an accurate size for Pluto due to “complicating factors from its atmosphere.”

The New Horizons spacecraft is preparing itself for a historic flyby of Pluto today and has been snapping pictures of the dwarf planet as it gets closer.

1) Pluto was known as the smallest planet since its discovery in 1930;
2)Pluto has four known moons: Charon (ferryman of Hades), Nix (the Greek goddess of night and darkness), Hydra (the nine-headed serpent who guards Hades) and S/2011 P 1, which was discovered in 2011;
3) No spacecraft has ever visited Pluto. However, the spacecraft New Horizons, which was launched in 2006, is scheduled to fly by Pluto in 2015 and it has send the beautiful images of pluto;
4) It takes about five hours for sunlight to reach Pluto. It takes eight minutes to reach Earth;

5) Pluto was reclassified from a planet to a dwarf planet in 2006.And now Pluto wants its status of planet back. 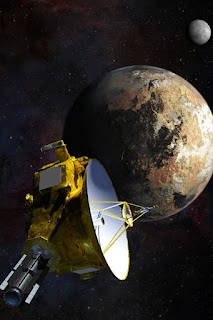 Education:
After Venus & Jupiter, last month, June 30 2015, here another important scientific fact that teachers and students are missing at school. It's summer break.
Students and teachers are on vacancy.  However educators and students can follow all the news on media and collect some good digital resources to include into school curriculum, when you will back to school, on August or September, or to propose to your sciences teacher.


Of course you can follow all the scientific details on New Horizons|NASA to understand the importance of this event.