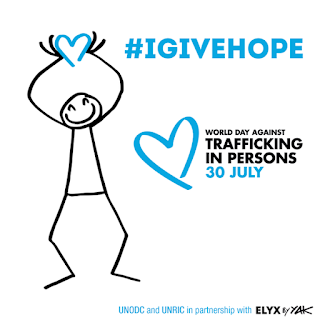 "Every country must join together to overcome this transnational threat by supporting and protecting victims while pursuing and prosecuting the criminals. On the World Day Against Trafficking in Persons, let us resolve to act as one in the name of justice and dignity for all."
Secretary-General Ban Ki-moon
30 July marks the United Nations World Day against Trafficking in Persons.
To mark this special day, the United Nations Office on Drugs and Crime (UNODC) are encouraging people across the globe to express their solidarity with the millions of victims of human trafficking by giving back what they had stolen from them: hope.
At any given time, an estimated 2.5 million people are trapped in modern-day slavery. Men, women and children fall into the hands of traffickers both in their own countries and abroad.
Every country in the world is affected by human trafficking, whether as a country of origin, transit or destination for victims.
Slavery, in both its ancient and modern forms, is not only shameful, it is as the abolitionist John Wesley said “the execrable sum of all villanies,” and has no place in our world.
In 2013, the General Assembly held a high-level meeting to appraise the Global Plan of Action. Member States designated July 30 as "the World Day against Trafficking in Persons". 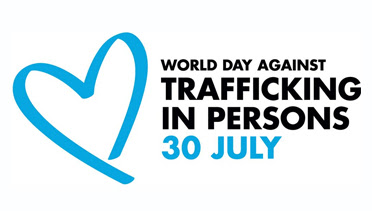 This resolution declared that such a day was necessary to “raise awareness of the situation of victims of human trafficking and for the promotion and protection of their rights.”

In 2014, the #igivehope campaign was launched to raise awareness around human trafficking and provide everyday people with a way to show solidarity with the victims most affected by this crime.

https://www.unodc.org/
This year, the UN is encouraging people across the globe to take part in the campaign and share it with their friends, families and communities ahead of the 2015 World Day against Trafficking in Persons, 30 July.
Show your solidarity with victims of human trafficking:  download the 'how to' for more details on getting involved and remember to  sign up for the 30 July Thunderclap and join the coordinated mass social media message that will be going out on the World Day. 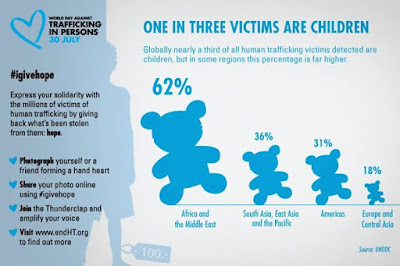 "With children making up a third of all detected #humantrafficking victims globally, we want YOU to join us in showing your solidarity with those affected by this terrible crime. Support the#igivehope social media campaign ahead of the UN World Day against Trafficking in Persons on 30 July and help give back what’s been stolen from millions across the planet: hope."

I know. Teachers and students are enjoying their school break. However, we can forget those children and young adolescents who are among the human trafficking people?

This kind of inhuman violence against children is everywhere. We can't turn a blind eye. It’s impossible.

You have a school blog and social media accounts in your name or school name. Why not alert your students about the World Day Against Trafficking People and call them to support #igivehope social media campaign. It's so simple and their support will be very appreciated.

I'm sure your students will support this #givehope social media campaign. They love social media, they are conneceted all day. And they will love to share their support.

If you are preparing your lessons to the next school year, think about include this human subject in your curriculum. 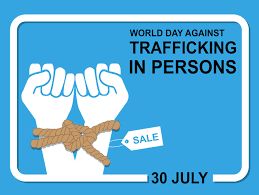 Are you in? Great - then here’s how:
Take a photo of yourself forming a heart with your hands – this is the internationally recognized gesture of love, care and friendship and a symbol of offering hope to the millions of trafficking victims (Tip: you might want to get a friend to help – that way you can also take one of them!) Here are some examples – but we encourage you to be creative and unique!
Using the hashtag #igivehope, share the photo with your friends and the world across social media. We want to make this big and will be collecting as many of your photos as possible to create one large #igivehope heart!

Sign up for the World Day Thunderclap which will be sent out on 30 July: simply ‘lend’ your social media voice and encourage others to join the #igivehope campaign to show solidarity with victims of human trafficking. Visit sign up for the 30 July Thunderclap to sign up now.

Civic Education : World Day Against Trafficking in Persons by G-Souto is licensed under a Creative Commons Attribution-NonCommercial-NoDerivatives 4.0 International License.
Posted by G-Souto at 4:59 PM