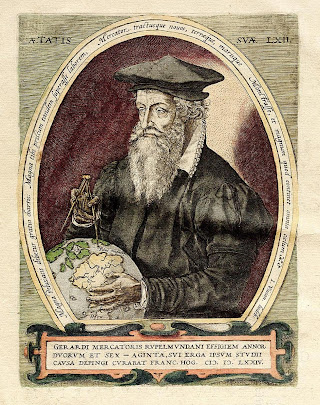 Gerardus Mercator born on 5 March 1512 and died on 2 December 1594 was a 16th-century Dutch cartographer, geographer and cosmographer. He was renowned for creating the 1569 world map based on a new projection which represented sailing courses of constant bearing (rhumb lines) as straight lines, an innovation that is still employed in nautical charts.

2015 marks the 503rd birthday of Gerardus Mercator, the Flemish inventor of the flat map.

Today, Mach 5th, Google is celebrating with a Doodle, the 503rd birthday of 16th century cartographer Gerardus Mercator, who coined the term 'atlas' in reference to a collection of maps.

Mercator is considered the father of the modern map. Mercator, who was born in the County of Flanders, now in modern Belgium, changed the face of 16th century maps.

Mercator was one of the pioneers of cartography and is widely considered the most notable figure of Netherlandish school of cartography in its golden age.
Flemish cartographer whose most important innovation was a map, embodying what was later known as the Mercator projection, on which parallels and meridians are rendered as straight lines spaced so as to produce at any point an accurate ratio of latitude to longitude. He also introduced the term atlas for a collection of maps.

A renegade, who battled the church establishment, Mercator was accused of heresy for his innovative cartography designs.

His maps revolutionized navigation. For the first time sailors could plot a straight-line course over vast distances. It was from this discovery that laid the foundation for a plotting system that would one day evolve into GPS. 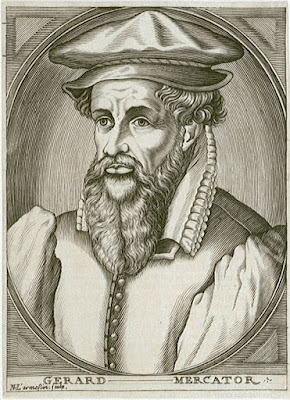 Born on 5 March 1512, Mercator was educated in the Netherlands, where he was taught theology, a type of philosophical argument called dialetics, and Latin.

By 1532, he graduated with a master’s degree in Humanities and Philosophy from the Catholic University of Leuven, now in modern-day Belgium.
Gemma Frisius
credits: Library of Congress/ Science Photo Library
https://www.sciencephoto.com/
He would go on to master Mathematics, Geography and Astronomy with the help of leading mathematician Gemma Frisius.

Aged just 24, Mercator was an excellent engraver, calligrapher and made exquisite scientific instruments.

In 1534 Mercator married Barbara Schellekens, with whom he had six children.

His fortunes changed in 1544 when he was imprisoned for heresy, after a combination of his Protestant faith and his frequent trips to gather information for his maps aroused suspicions.

But with the help of university authorities, he was released after seven months and continued his work. 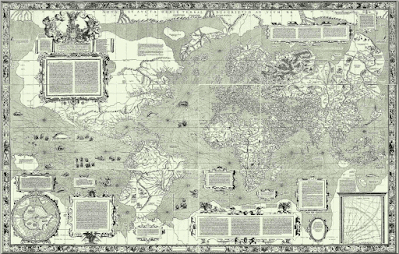 Mercator map of the world,1569
https://en.wikipedia.org/

Mercator became a well-known figure in around 1552, when he moved the Duchy of Cleve, in modern-day Germany, and established a cartographic workshop where he hired his own engravers.

However, he was not publicly recognized for his work until 1564 when he was appointed as the court “cosmographer” to Duke Wilhelm of Cleve.

It was during these years he perfected his projection technique, later named the “Mercator projection,” which he went on to use on his map of the world in 1569. Mercator then began to put together a series of publications to describe the creation of the world and its subsequent history, which he called the atlas.

Mercator died in 1594 in the Duchy of Cleve. He is buried in Duisburg's main church of Saint Salvatore.
His epitaph : "the foremost mathematician of his time who crafted artistic and accurate globes showing the heaven from the inside and the Earth from the outside ... greatly respected for his wide erudition, particularly in theology, and famous on account of his piety and respectability in life".

Exhibits of his works can be seen in the Mercator treasury located in the city. More exhibits about Mercator's life and work are featured at the Mercator Museum in Sint-Niklaas, Belgium. 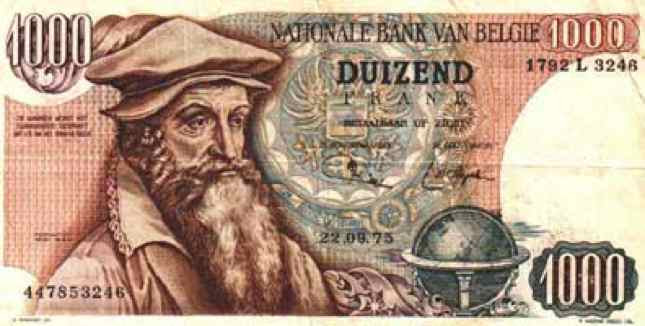 A skilled engraver and talented calligrapher, Mercator’s maps were not only functional technological marvels but stunning works of art. Not surprisingly his artistic influence has as great a reach as his technological innovations.

The contemporary art world is filled with artists who are using maps in their work.  Artists like late Italian conceptual artist Alighieri and Boetti whose Mapp series was a group of large embroidered maps of the world woven by master Afghan weavers.

French artist Elisabeth Lecourt has made the maps wearable by constructing dresses made of paper maps of London, New York and Paris.

These are only a handful of the growing number of artists who see the map as something to explore.

Mercator is buried in Duisburg's main church of Saint Salvatore. Exhibits of his works can be seen in the Mercator treasury located in the city. 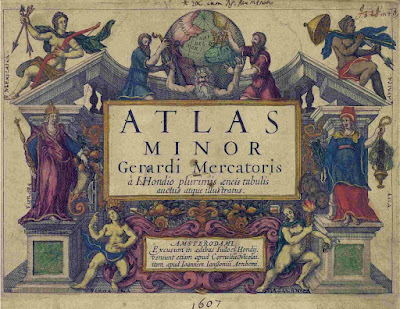 A Doodle is a symbolic digital resource. This one reminds us the 503rd anniversary of the important cartographer. Why not include into our lessons?

As teachers, we can prepare some events or propose interesting resources or activities to students.

Schools are rich environments of teaching and learning. Schools and teachers have an important role aiming to renew and reinvigorate global knowledge as they have the mission to educate children and adolescents as future citizens.

These resources are digital educational challenges to promote famous scientists, humanists, scholars and artists who will inspire students to find new path towards precious solutions to society and planet. Humanities, Sciences, Arts, are the basic curricula.

I selected several activities to involve students but you are free to have your own ideas:

Levels: All levels (different activities for different ages and grades). 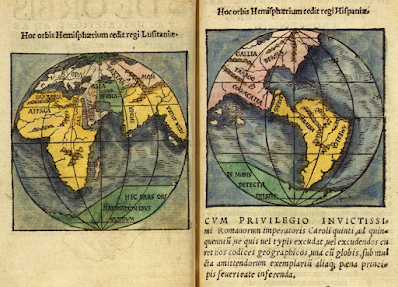 The Portuguese (Lusitanian) and Spanish hemispheres of the globe
Franciscus Monachus, 1527
https://en.wikipedia.org/

So as you see, can we say that formal learning is a non captivating method? Of course, not! Be creative! And let your students be creative.

Well, there are a lot of funny and engaging activities about Sciences and Humanities that we can create and share with our students, on informal learning (online learning) and in-person lessons. Technology has a good role in all this.

Believe me! You will have a motivated class that will learn and share some knowledge.

To us, as educators, "the attitude" of changing methods, and the creative mind to facilitate different learning activities at our young students!

Schools : Gerardus Mercator, the cartographer of world atlas : resources by G-Souto is licensed under a Creative Commons Attribution-NonCommercial-NoDerivatives 4.0 International License.