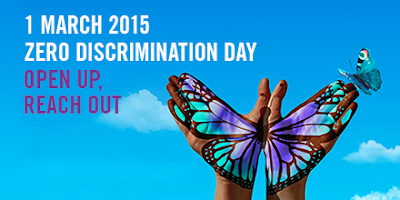 “Everyone has the right to live with respect and dignity.”

Today March 1 is Zero Discrimination Day, a chance to celebrate diversity and to reject discrimination.

The United Nations has kicked off the 2015 global edition of Zero Discrimination Day as part of the Organization's wider effort to spur solidarity towards ending discrimination.

“Discrimination is a violation of human rights and must not go unchallenged,” United Nations
Ban Ki-moon,  Secretary-General

2015's theme Open Up, Reach Out encourages all members of the international community, to unite under the banner of diversity and celebrate each other's difference in an authoritative rejection of discrimination in all its forms.

At the same time, Zero Discrimination Day, observed annually on 1st March, draws attention to "the millions who still suffer from social and economic exclusion due to prejudice and intolerance."

Millions of women and girls in every region of the world, for instance, experience violence and abuse on a daily basis and struggle to access adequate health care and education.

"Meanwhile, globally, there are almost 80 countries that still have laws criminalizing same-sex sexual relations while some 38 countries, territories and areas impose some form of restriction on the entry, stay and residence of people living with HIV. Furthermore, legal and social environments are still failing to address stigma and discrimination against people living with HIV and those most vulnerable to HIV infection." 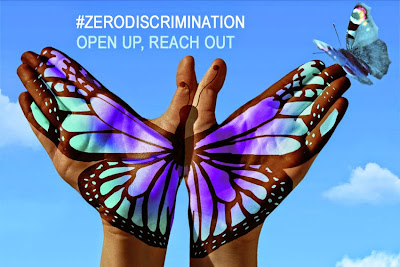 “Some of the world's most challenging problems can be solved simply by eliminating stigma and discrimination,” said Michel Sidibé, Executive Director of UNAIDS. “As we collectively strive for a fairer world we can be encouraged by the enthusiasm for achieving zero discrimination.”
The UN day will be marked by a number of events held around the world : photo exhibitions in China, dancing in Gabon, concerts in Madagascar, a storytelling event for children in Mongolia and special film screenings in Nepal. 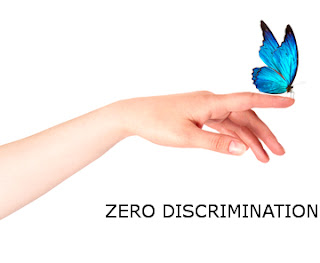 Zero Discrimination Day is a pedagogical activity teachers must include into school curriculum.

We know  that discrimination exists at school between students. How often teachers are called to help some students who are suffering some stigma and discrimination from their schoolmates.

Not only today but everyday, in our lessons, at school, teachers and students have the chance to celebrate diversity and reject discrimination.

Prepare some activities to include Zero Discrimination Day into your lessons next week.

Invite your students to join the #ZeroDiscrimination campaign:

Being inspired by the butterfly, the transformative symbol for zero discrimination students can :

If you need some resources to talk about Aids you have two important posts on G-Souto's Blog:

Note: Of course you must adapt the activities to the level you are teaching and age of your students.

Ask your students to be as creative as they wish. Let them show how creative they are. And they are, believe me!