Spring is like a perhaps hand
(which comes carefully
out of Nowhere)arranging
a window,into which people look(while
people stare
arranging and changing placing
carefully there a strange
thing and a known thing here)and


from 'Spring is like a perhaps hand' by E. E. Cummings

The gentle spring stars are making a welcome return to our skies, chasing away the steely-blue orbs of winter. The flowers bloomed years earlier than expected, with more petals than on a normal tree.

Spring equinox is here and ready to capture the world's attention with Supermoon and Solar eclipse on March 20, 2015.

After the Lunar eclipse on 15 April 2014, the world will watch this unique moment. 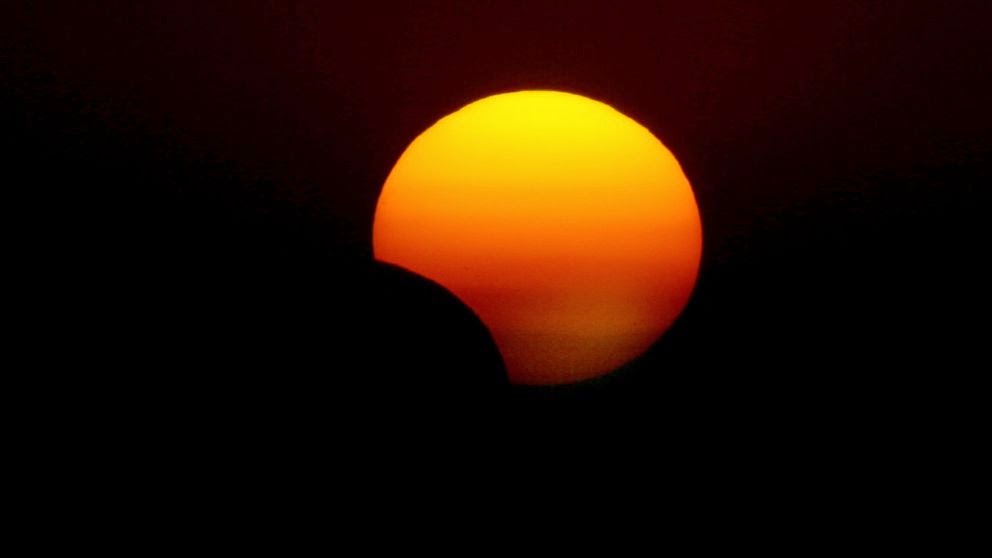 A partial solar eclipse will be visible in most of Europe and is the first since November 2013.
As the eclipse plunges Faroe Islands and few other places into darkness this Friday, two other rare spectacular celestial events will be taking place, too: a Supermoon and the Spring equinox.

Anyone in the world can catch a glimpse of the cosmic wonder at Slooh's online observatory, which will live stream the event at 4:30 a.m. ET.
NASA predicts the "instant of greatest eclipse" will happen at 5:45 a.m. ET for people who want to watch online.

A Supermoon, or perigee moon, happens when the full or new moon does its closest fly-by of the Earth, making it look bigger than it normally does.

Most of the time, there are between three and six Supermoons a year. In 2015 there is set tobe six, two of which have already happened. The next will take place on March 20, the day of the eclipse, and the others will come in August, September and October.

The spring equinox refers to the time of the year when the day and night are of equal duration, mid-way between the longest and shortest days.

The equinox will also happen on March 20. While it won’t have any discernable, direct impact on how the solar eclipse looks, it will contribute to a rare collision of three unusual celestial events.

The Earth’s axis will be perpindecular to the sun’s rays — which only happens twice a year, at the two equinoxes. After that, it will start tipping over, making the days longer in the northern hemisphere.

The equinox will happen at the same time as a solar eclipse in 2053 and 2072, though it doesn’t always appear as close together as that. 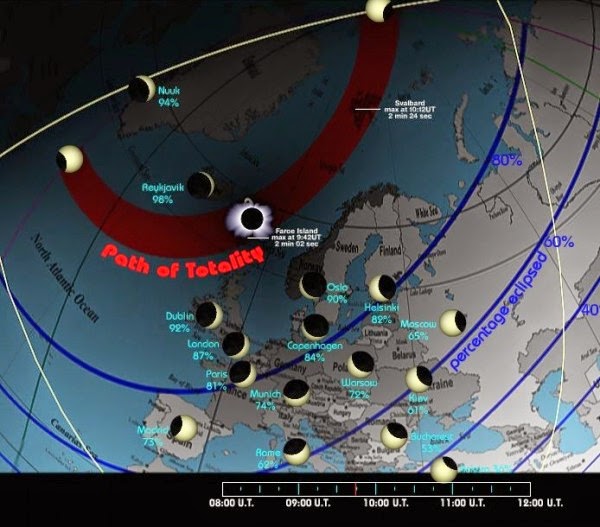 The solar eclipse refers to a phenomenon where the sun and moon line up, so that the latter obscures the former. And while it won’t be affected by the two other events, it is rare that the three events happen even individually.

As a result, only the last three Supermoons of this year will be visible. Because the moon is new rather than full on March 20, it won’t be seen. But it will be gliding past us closer than ever, and its shadow will be visible as it blocks out the sun on Friday morning.

Babylonians and the ancient Chinese were able to predict solar eclipses as early as 2500 BC, but it was a phenomenon that confounded ancient civilisations for centuries.

A variety of cultures thought the eclipse was a result of entities devouring the sun.

As well the eclipse itself, a Supermoon and the Spring equinox are set to happen all three of which have in the past been celebrated as events of significance within various cultures around the world.

The equinox has long been celebrated as a time of beginning and renewal, by a number of historic cultures, and is linked to Easter and Passover.

Stonehenge one of the wonders of the world and the best-known prehistoric monument in Europe, will be open from the start of the equinox to allow Druids and Pagans to gather and see the sun rise above the ancient stones.

Druids and Pagans will celebrate the ancient Saxon goddess Eostre, who symbolises fertility and new beginnings.

Superstitions surrounding solar eclipses still exist today. Many believe that solar eclipses can be a dangerous to pregnant women and their unborn child – a claim that scientists have debunked.

The path of total eclipse travels from just below the Greenland peninsula, heading north into the Arctic Circle.
The course takes it across the Norwegian island of Svalbard and also the Faroe Islands, for a full two minutes and nine seconds of total solar eclipse.
These are the only two places which are easy to reach where the full total eclipse can be seen.
Europe and Asia will only see a partial solar eclipse.

Education:
On Friday 20 March is the last day of school time before Spring holiday in European countries, as well in North America, Australia, and most countries in the world.

I could not be informed about Asian countries, except Japan. It's Easter holiday also known as Spring holiday.

Even so, teachers had prepared students to understand this incredible moment and join astronomers on NASA Television, skywatchers, or national observatories of Astronomy.

It will be visible on the morning of March 20, with the eclipse visible from across Europe for approximately 90 minutes. 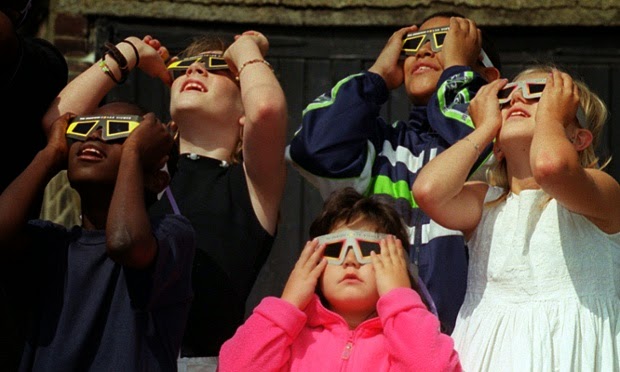 Remember your students ! DO NOT look directly at the Sun without appropriate protection, such as special eclipse glasses.

Special glasses that ensure sun spotters do not damage their eyes. Good solar eclipse glasses filter out all of the harmful ultraviolet and infrared light and almost all of the intense visible light to allow you to view the eclipse safely.

But thousands of people across the world are in the precess of building their own viewers. Children should get an adult to help build and use this projector. Take extra care when using sharp tools like craft knifes and scissors.

The safest way to view a solar eclipse is to project it onto a piece of paper. Using a cardboard box, you can make a pinhole projector.

After Spring holiday, teachers and students will discuss their experiences and knowledge.

Resources for teachers and students:

Solar eclipse 2015 : what you need to know
http://www.theguardian.com/science/2015/mar/19/solar-eclipse-what-you-need-to-know

How can we watch a solar eclipse safely
http://www.bbc.co.uk/guides/zcytpv4

Wishing all a awesome Solar eclipse, Spring equinox and so with traditions or not. But do not be superstitious...