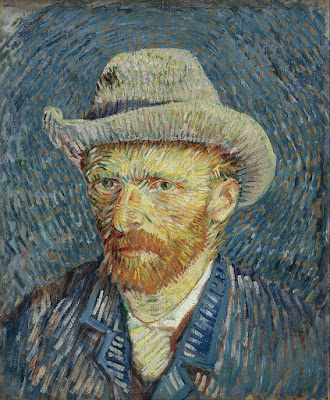 Unravel Van Gogh is the updated version of the successful Touch van Gogh app. Numerous stories are hidden in and underneath the paint of Vincent van Gogh’s paintings. Unravel Van Gogh reveals what you cannot see with the naked eye. 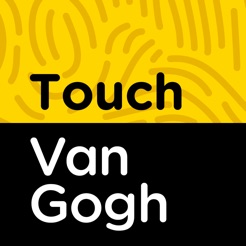 My first post of 2014! I would like to write about Arts! During holiday season, I read some good web articles and I discovered that Van Gogh Museum had released on iTunes an app Touch Van Gogh on October 3, 2013, updated December 16, 2013. The new update is from 2018.

The app shows what is concealed in and under the paint on artworks by Vincent van Gogh. Nine paintings are available on the app. 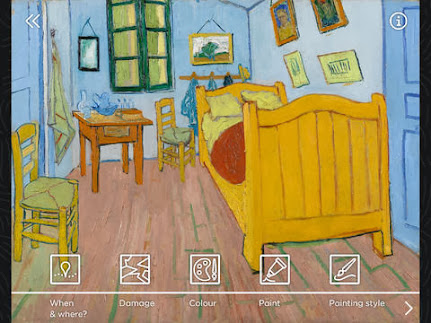 The English-language app for tablets called Touch Van Gogh reveals the secrets in and behind the paint on Van Gogh's canvases.

This app allows us to explore the wealth of information contained in and under the paint in Van Gogh’s masterpieces.

Touch Van Gogh was created by Van Gogh Museum for anyone who would like to: 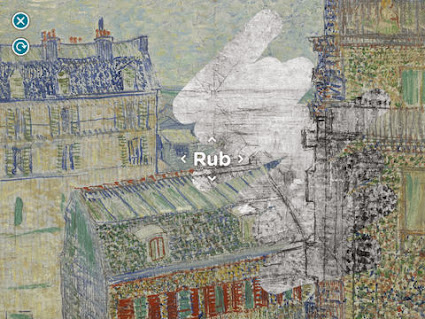 The app includes Van Gogh’s paintings, letters and sketches, biographical information and research findings that shed new light on the art works and their maker.

Free download from the App Store or Google Play.

Art teachers can include Touch Van Gogh app into Art curricula and other general curriculum as Languages, Literature and Music.

It's a wonderful educational digital resource to initiate the young students in the art of drawing and painting; the oldest students can explore what's hidden under the paint of Van Gogh's masterpieces. 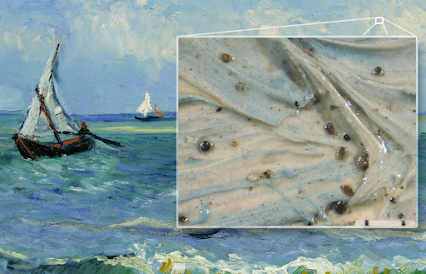 In the recently restored painting Field with Irises near Arles, students can virtually polish away the discolored layer of varnish, just as the restorer did on the original.
Through the colour reconstruction of The Bedroom, they see the colour of the painting before the red pigment faded. The walls of the room are no longer lilac but blue.
And learn that The Cottage was painted on a canvas that Van Gogh once used for a painting of a shepherd with sheep. In Seascape near Les-Saintes-Maries-de-la-Mer, which he painted outdoors, you see grains of sand in the paint.
And with Daubigny’s garden, they will observe that the painting was painted on a tea towel.
The other paintings in the app are Self-portrait as a painter, Quinces, Lemons, Pears and Grapes, View from Theo’s Apartment and Garden of the Asylum. 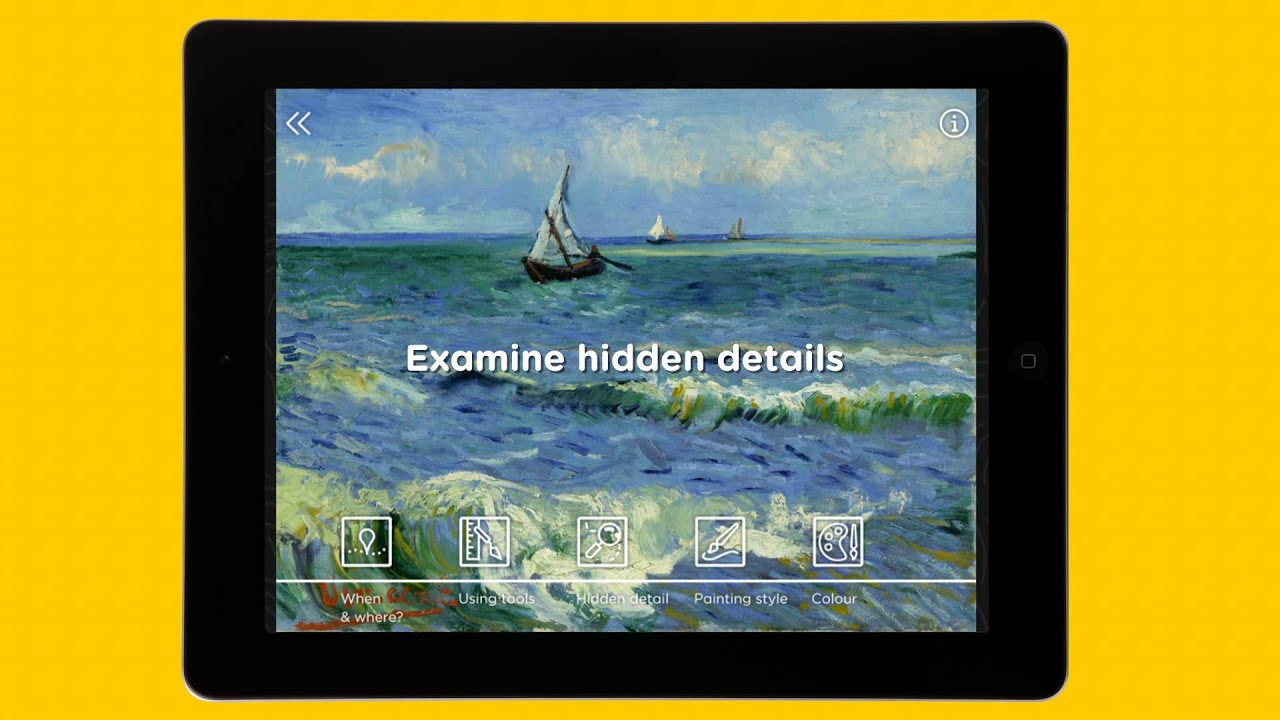 Let students discover the amazing stories behind The bedroom, Daubigny's garden or View from Theo's apartment and learn more about the latest research at the Van Gogh Museum.

The app includes information about reused canvases, paint discoloration, and Van Gogh's use of the perspective frame.

Simply ‘touch’ Van Gogh’s art works and let the paintings tell their stories. The surprises in store include revelations about recycled canvases, discolored pigments and Van Gogh’s use of a perspective frame.

Another 12 paintings will be included in the app during the coming two years. 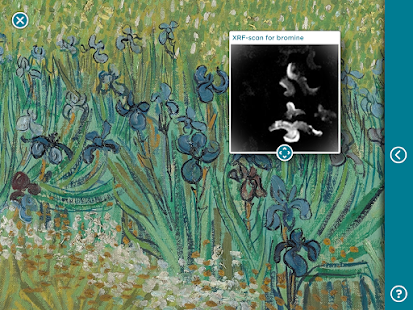 In September 2015, nine of Van Gogh’s masterpieces are now available in the app. Unravel the secrets which are concealed in and under the paint of Van Gogh’s paintings.

The release is available from 17 September in the Google and Apple app stores.
“This third release of the acclaimed app allows people to unravel nine iconic works by the best known artist in the Netherlands and thus discover for themselves the secrets of Van Gogh’s painting techniques and working method. The app, designed for tablets, uses multitouch functions to enable users to discover at home the secrets concealed in and under the paint. We make the results of years of complex material-technical research into Van Gogh’s working method accessible to a wide public.”
Axel Rüger, director of the Van Gogh Museum
Three paintings by Vincent van Gogh have been added to the internationally acclaimed English language app for tablets Touch Van Gogh: ‘Self-portrait as a Painter’, ‘Quinces, Lemons, Pears and Grapes', and ‘Field with Irises near Arles’. 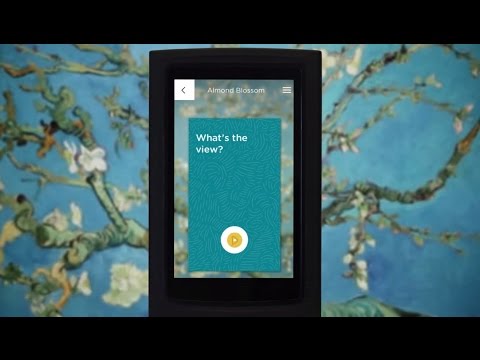 Unravel the secrets:
Invite your students to discover that the flowers in the recently restored painting Field with Irises near Arles faded from purple to blue. Or rub away the discoloured layer of varnish which hid the colours of the painting, as the restorer did with the original.
In the painting Quinces, they will see that Van Gogh even painted the frame of this work, changing his mind about its colour as he worked. 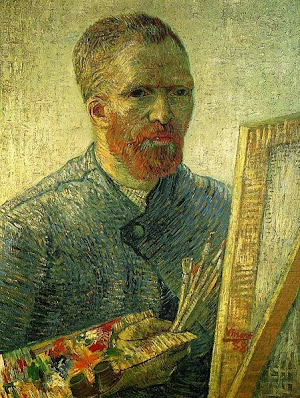 Self-portrait Van Gogh as a Painter
Touch Van Gogh app
credits: Van Gogh Museum
https://www.vangoghmuseum.nl/
Finally, Van Gogh’s Self-portrait as a Painter has been added to the app. Discover the similarities and differences between the self-portraits.
The app now has nine paintings. The other six are: The Cottage, Seascape near Les-Saintes-Maries-de-la-Mer, Garden of the Asylum, The Bedroom, Daubigny’s Garden and View from Theo’s Apartment.

On 26 June 2015 Touch van Gogh was recognized as one of Best Apps for Teaching & Learning/ Social Sciences by the The American Association of School Librarians (AASL).
In November 2014 the app received two awards: the World Summit Award Mobile in the ‘m-Tourism & Culture’ category and 'Gold' in the 'Best App' category of the International Design and Communication Award (IDCA).
The app was also awarded the Heritage in Motion Award 2014 in the apps for mobile devices category in April 2014.
The app was created in collaboration with IJsfontein.

Note: However, Touch Van Gogh no longer met with the technical requirements of a modern-day app.

Unravel Van Gogh allows you to discover more about how Van Gogh set to work.

It’s very difficult to see with the naked eye, but if you closely examine the painting Seascape near Les Saintes-Maries-de-la-Mer, you’ll see grains of sand in the paint. Van Gogh painted the work outdoors, and sand blew onto his canvas.
Van Gogh’s paintings conceal plenty more intriguing stories. Which secrets are waiting to be unravelled in other artworks? Find out for yourself as you view masterpieces including Field with Irises near Arles, The Cottage, Self-portrait as a painter, Quinces, Lemons, Pears and Grapes, View from Theo's Apartment and Garden of the Asylum.

Embark on a voyage of discovery on your smartphone, tablet or desktop computer.

The web app is free to use, all you need is an internet connection.

Of course, don't miss to go to a Museum with your students, near your school and have the chance to do a real Art class.