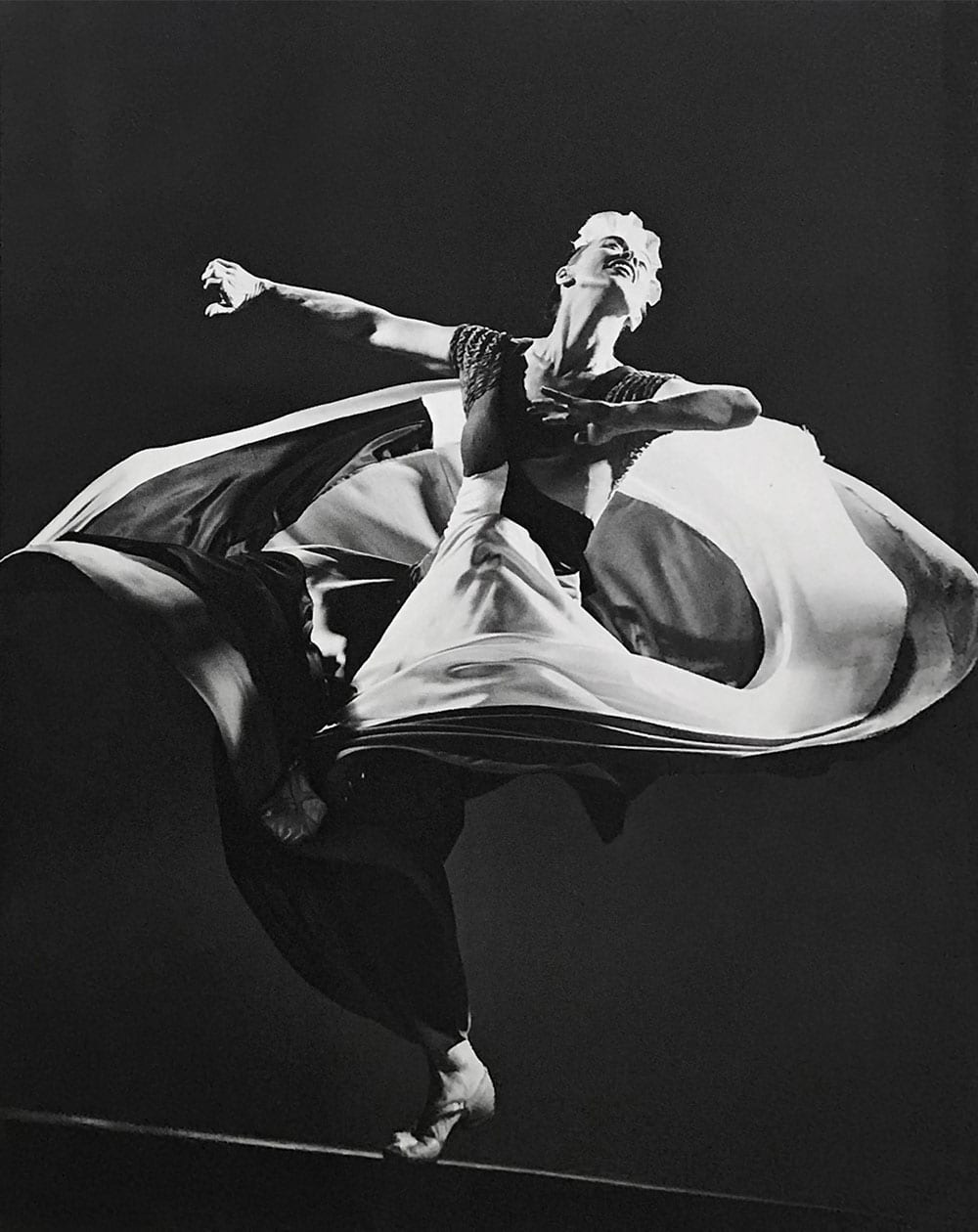 Martha Graham
credits: Barbara Morgan
Courtesy Bruce Silverstein Gallery, New York
https://www.smithsonianmag.com/arts-culture/
"The center of the stage is where I am," she once said. It still is.
The Graham technique is a modern dance movement style and pedagogy created by the American dancer and choreographer. Graham technique has been called the "cornerstone" of American modern dance.
Over more than 50 years she created more than 180 works, from solos to large-scale works, in most of which she herself danced. She gave modern dance new depth as a vehicle for the intense and forceful expression of primal emotions. She died April 1, 1991 in New York.

Google celebrates the 117th Anniversary of Martha Graham with a lovely interactive Doodle.

If you initially visit the Google Doodle homepage, you will be greeted by a blank screen, but after a short pause, the animation of a figure styled on Martha Graham (and her choreography) gracefully dances across the screen to spell out six letters writing the word Google in swooping movements and turns. Just beautiful! 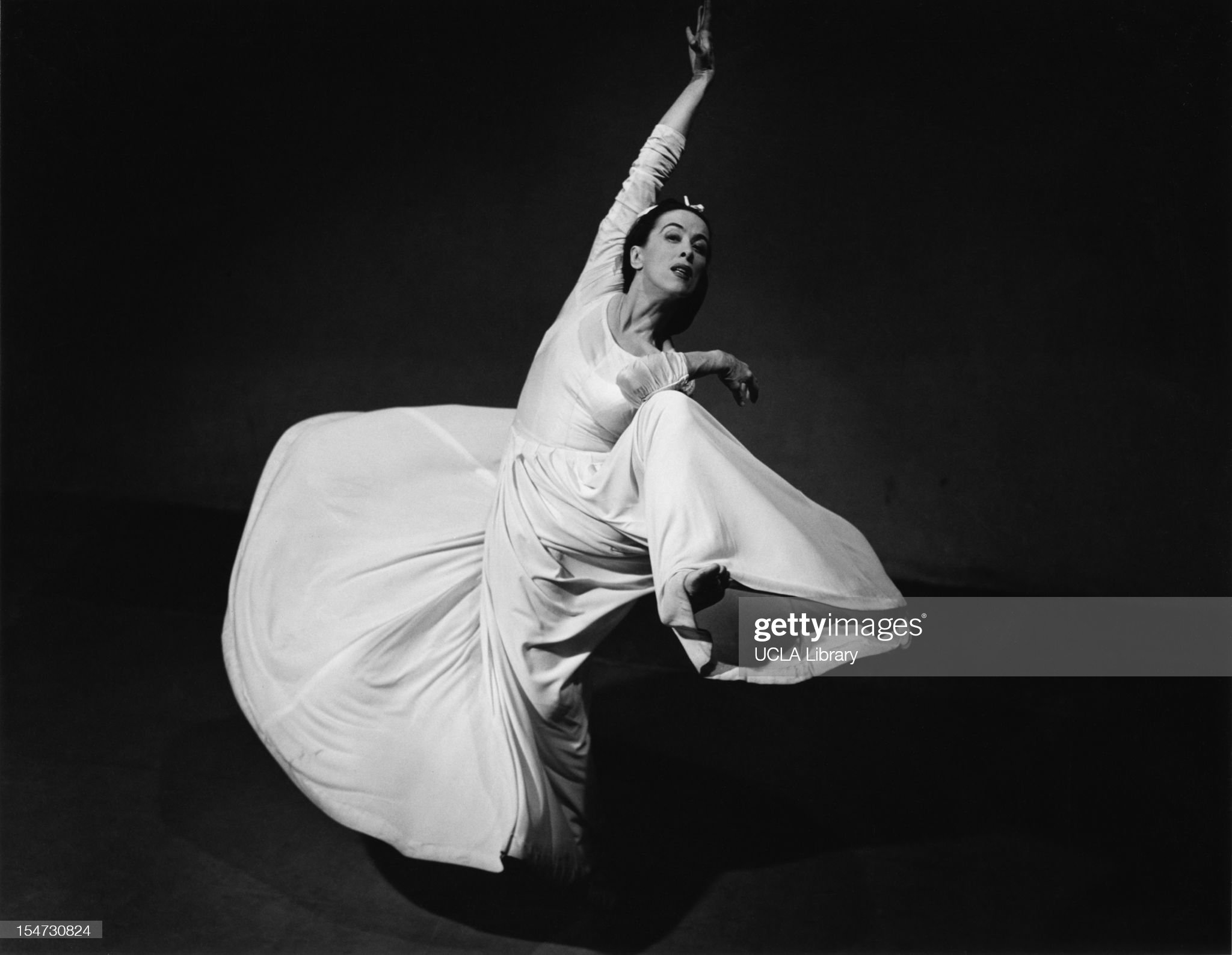 Martha Graham, 1940
credits: UCLA Library
via Getty Images
https://www.gettyimages.com/
"How do you fit seven decades of American innovation into 15 seconds? That was the challenge when Google asked us to collaborate on the Google Doodle to celebrate Martha Graham’s birthday." 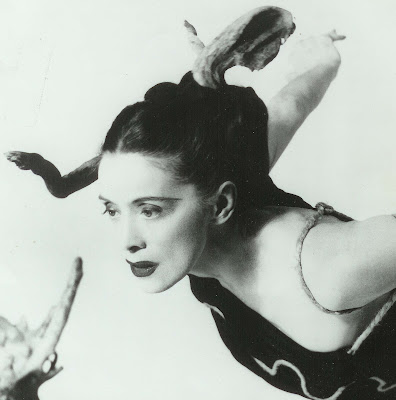 Martha Graham in “Cave of the Heart,” around 1946Credit...
Chris Alexander, via Martha Graham Resources,
a division of the Martha Graham Center of Contemporary Dance, Inc.
https://www.nytimes.com/2020/05/11/arts/dance/
Here the real story behind Martha Graham's Google doodle. Don't miss the story of the 5 figures styled on Martha Graham's performances.
An now the video Doodle:

Martha Graham the American dancer and choreographer whose name became synonymous with 'Modern' or 'Contemporary' Dance.

"Her fierce choreography sometimes amazed and sometimes horrified, but in it she embodied modern dance — arrogantly and spectacularly."

Terry Teachout, The Dancer Martha Graham, in Time, 1998
TIME magazine in 1998, named Martha Graham “Dancer of the Century,” and People magazine named her among the female “Icons of the Century.”
"As a choreographer, she was as prolific as she was complex. Graham created 181 ballets and a dance technique that has been compared to ballet in its scope and magnitude. Her approach to dance and theater revolutionized the art form and her innovative physical vocabulary has irrevocably influenced dance worldwide."

In the 1920s and 30s, she created a completely new style of dancing and revolutionized dance and theater worldwide.

Graham's choreography, techniques and routines form the basis of many modern styles of dance. 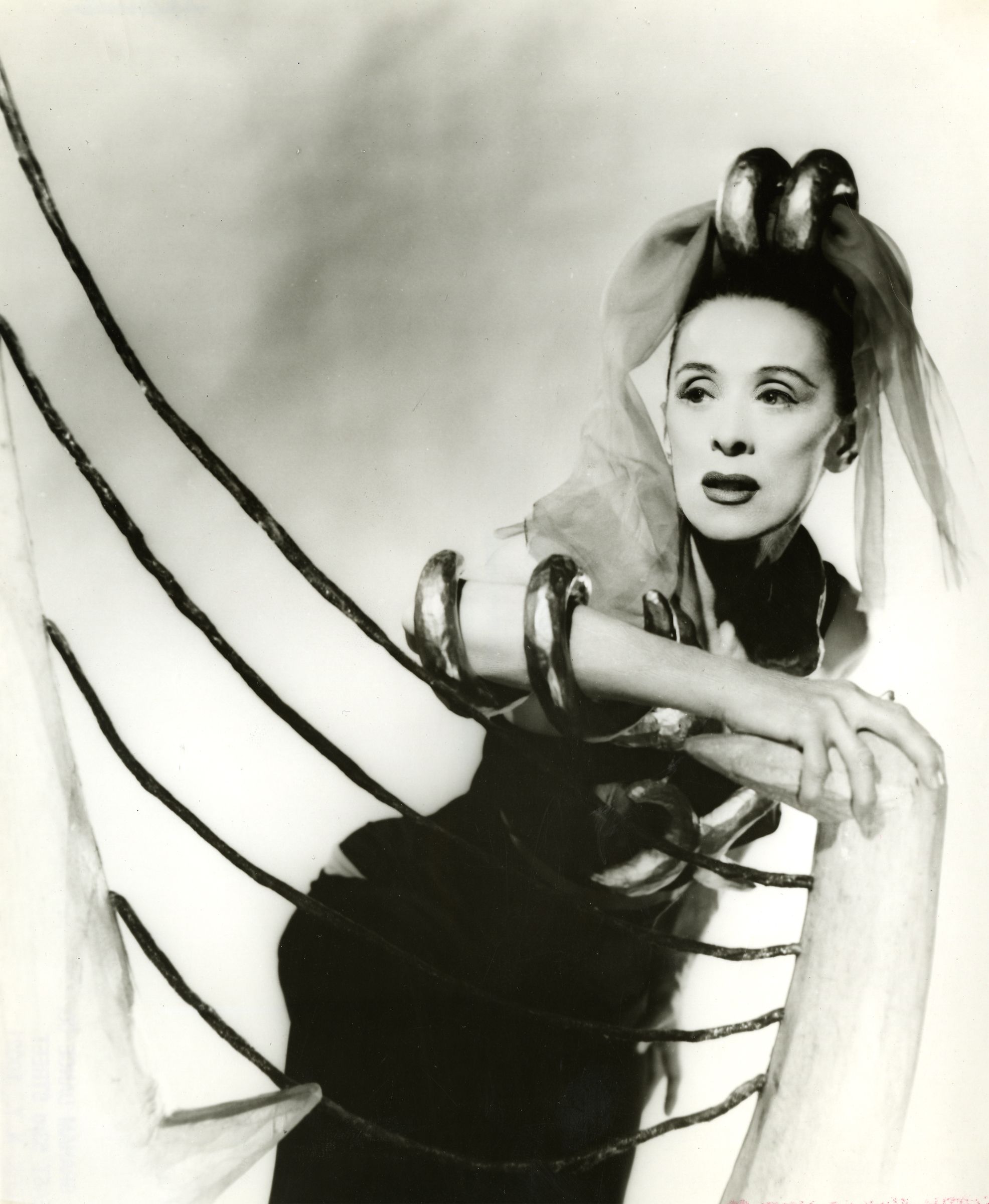 She performed since 14 years-old, became a dancer at the age of 22, and left the stage at 75 when she gave her final performance in 1969.
As an artist, Martha Graham conceived each new work in its entirety: dance, costumes, and music.
She invented a new language of movement, and used it to reveal the passion, the rage, and the ecstasy common to human experience. 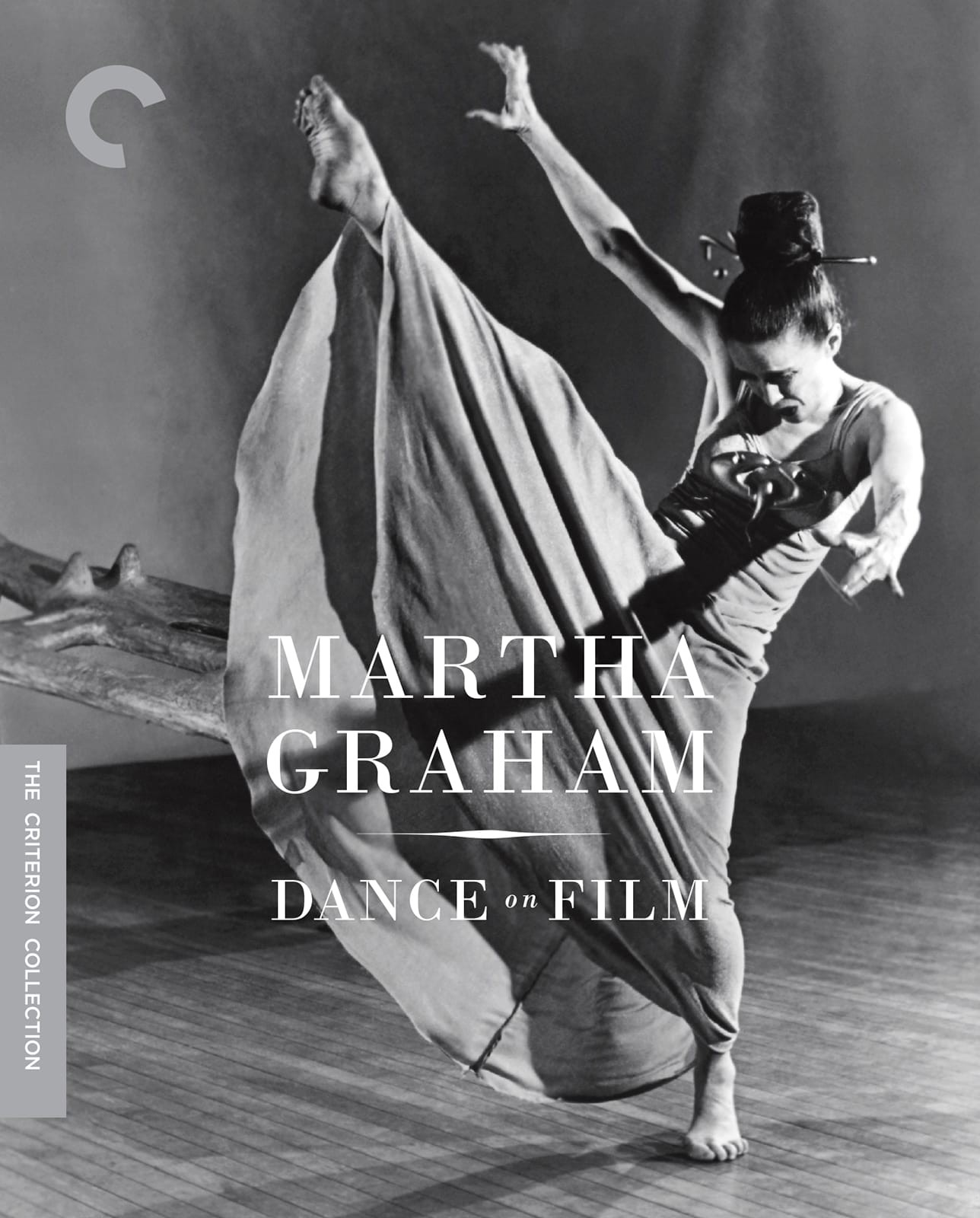 Graham choreographed more than 180 works, looking on enviously later in life at young dancers performing in her signature style, based upon contraction and release of the body.
Her legacy lives on in the techniques used by dance companies around the globe, including the Martha Graham Dance Company that has continued to develop contemporary dance since its founding in 1926, often rooting works in contemporary social contexts.

In developing her technique, Martha Graham experimented endlessly with basic human movement, beginning with the most elemental movements of contraction and release. Using these principles as the foundation for her technique, she built a vocabulary of movement that would “increase the emotional activity of the dancer’s body.”
"Martha Graham’s dancing and choreography exposed the depths of human emotion through movements that were sharp, angular, jagged, and direct. The dance world was forever altered by Martha Graham’s vision, which has been and continues to be a source of inspiration for generations of dance and theatre artists."
The New York Public Library has acquired Graham’s archive, filling a significant gap in the story of early modern dance in America.

“I have spent all my life with dance and being a dancer. It’s permitting life to use you in a very intense way. Sometimes it is not pleasant. Sometimes it is fearful. But nevertheless it is inevitable.”
Martha Graham

Twitter is a buzz with famous quotes from Martha Graham and her supporters over the years. 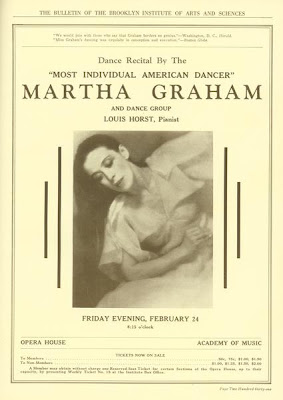 Advertisement for Graham's first BAM appearance, 1933
https://bam150years.blogspot.com/
The following night brought about the revival of Graham’s 1940 piece Letter to the World, an exploration of the duality between the inner and outer lives of the artist, inspired by the poetry of Emily Dickinson. Its title is taken from one of Dickinson’s most well-known poems:

As my usual readers know some of my posts are about Arts in public education. Grand Finale: Dream comes true, 25 Years of Pixar in Education, World Day Dance in the School Fighting Kids Obesity... Dancing, I think Arts education programs may be on file in schools.

"In a world of extraordinary complexity, a premium is placed on one's ability to quickly process massive amounts of wildly varying types of information. Musical instruction helps young people develop the brain capacity to process a lot of information and to organize and present it."

There are an enormous group of students who are gifted that can't afford early artistic education.

Students attending schools in high poverty communities have less access to Arts instruction than their peers in more affluent communities.

Pressure to improve test scores in other content areas is another top barrier to Arts education. 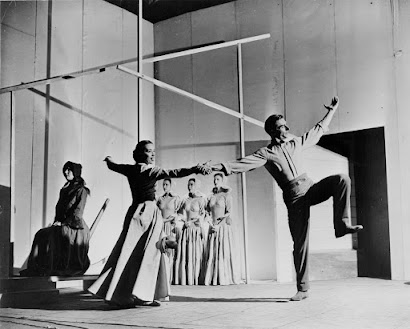 However it's proved that Arts - music, dance, theater -, are a wonderful therapy for hyperactive kids that have concentration problems.

Arts give them the concentration discipline and the pleasure to express with creativity.

It's true that a lot of schools do not have even a specialist of Arts in full-time-equivalent, although secondary schools are much more likely than elementary schools to employ specialists.

At the elementary level, Arts education is often left to regular teachers who rarely have adequate training.

It's important to inform school directors, regular teachers, parents, and students that Arts are a core subject by providing professional development for teachers and establishing assessment and accountability systems for Arts education.

It would be so important to give a different meaning of Arts in school curricula and to have good Arts teachers providing professional first development for kids that could, at a different level of education, continue Arts studies at Arts Higher Schools.

Martha Graham virtual exhibition
Google Arts & Culture
https://artsandculture.google.com/exhibit/
Visit and invite your students to follow you by exploring the virtual exhibition. Don't forget to propose some art of dance activities.
The legend of Martha Graham long ago became fact, just as her utterly personal technique has become part of the common vocabulary of dancers everywhere.
"The center of the stage is where I am," she once said. It still is.
Terry Teachout, The Dancer Martha Graham, in Time, 1998
"I give the dancers a technique. Technique is a language that makes strain impossible."
Martha Graham

References and Resources for Educators: