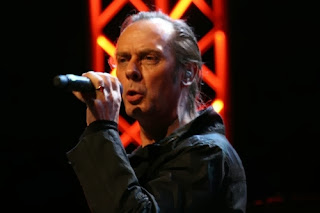 Included in the European Secret Covers Tour Peter Murphy enchanted all his fans who completely surrended, applauded Murphy and his group who performed new tunes like Velocity 0r Secret Silk Society, and old songs like I'll Fall With Your Knife or Time Has Got Nothing to Do with It among others.

Here one of my favorites "I Spit Roses"

"Peter Murphy is an art-school educated rock'n'roll frontman and lyricist of the highest order. His voice is unmistakable and he's wiritten songs that transcend genre or time-period."

Justin Warfield  from She Wants Revenge

Another good musician to talk about in you Music class with your students. Display some videos and share your thoughts with students. May be one or two know well Peter Murphy!

(because it's Sunday time)

Sunday time! by G-Souto is licensed under a Creative Commons Attribution-NonCommercial-ShareAlike 3.0 Unported License.