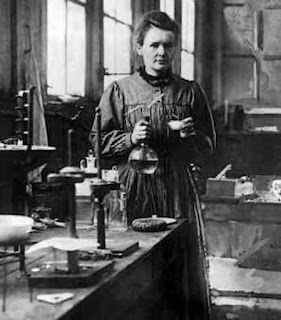 "Nothing in life is to be feared, it is only to be understood. Now is the time to understand, so that we may fear less."

I am a big fan of Google doodles! You know it! It is not the first time I wrote about Google doodles. Why? Because doodles can be interesting resources for educators.

"The doodle shows Marie Curie working at a table. The Google logo looks like a radioactive trace."

Of course you hear about 2011 as the International Year of Chemistry ! And it ends soon. So, let's talk about it, taking advantage of this tribute

I already wrote about this important event on two or three posts. And in all of them, I emphasized Marie Curie.

First on International Woman's Day Centenary, the official theme was "Equal access to education, training and science and technology: Pathway to decent work for women". 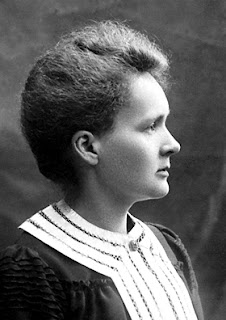 "Marie Curie was honored with a Nobel Prize in Chemistry (1911). Since then, only  3 women having been honored on this way. It's important to encourage young women to contribute their talent to this exciting field."

Again, on my post Rap in Chemistry curriculum? Fantastic! Inspired by a good and funny video created by the rapper Oort Kuiper  who wrote here

And today! Marie Curie is an inspiring woman for all young girls who choose Science and Chemistry to complete their higher education. 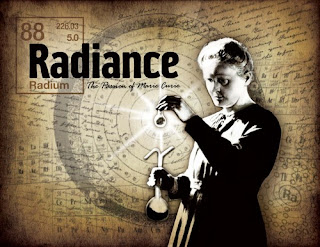 The Geffen Playhouse in Los Angeles, CA, is producing the world premiere of Radiance: The Passion of Marie Curie. It will run from November 1 through December 11, 2011.

"Radiance delves into the life and romance of one of the most brilliant female scientists in history.  Famous for her groundbreaking research in radioactivity, Curie was the only person ever to win two Nobel Prizes in multiple sciences, but not without a struggle. For all the answers that come to her in the lab, Curie’s life is peppered with questions of how to realize the passion she has for both knowledge and love."

It is a wonderful year to promote Science and Chemistry studies for girls in the schools and universities. Marie Curie is the best example that educators could share with female students.

"I am among those who think that science has great beauty. A scientist is his laboratory is not only a technician: he is also a child placed before natural phenomena which impress him like a fairy tale."