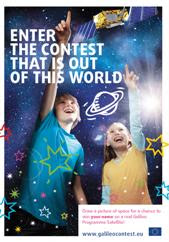 The Galileo Programme is about to start launching at least 27 satellites that will form a constellation orbiting at more than 20.000 km from Earth.

The first two satellites are planned to be launched in the last quarter of 2011, using a rocket to bring them into space.

Students from 25 European countries are invited to participate in a Drawing Competion to have a Galileo Programme Satellite named after them and launched into Space!

Students from one of the 27 European Member States of the European Union.


To enter in the competition, students must create a picture that represents ‘Space and Aeronautics’. The drawing project includes things like stars, rockets, planets and satellites and what else students think of that in Space.
Students can create pictures using any drawing, painting, or colouring technique that they would like.
They can use all sorts of materials like paints, felt tips, pencils, glue, glitter.
"The main thing is that you use a big dollop of imagination!"
How to do it?
Students helped by teachers, parents or school librarians can do this by scanning the picture or by taking a digital photo.
Only a picture by student. So, make sure that the students' choice is the favourite one.
Deadline:
Students must upload their picture until 15th November 2011.
You still have a month!


The drawings must be upload here


A National Jury Panel will then select a winning picture.
The winners will be invited to an Award Ceremony where they will be presented with a certificate and a trophy, to keep, that represents the satellite that will be named after them.

Alexandre Lourenço from Portugal
https://ec.europa.eu/growth/
"The first two satellites to be launched on 20 October will bear the names of the winning children from Belgium (Thijs) and Bulgaria (Natalia) where the competition already took place earlier this year."
Please find the Announcement in your own language here
"Take part in the competition and become an active supporter of this great adventure!"

Galileo Drawing Competion in school : enter your project ! by G-Souto is licensed under a Creative Commons Attribution-NonCommercial-ShareAlike 3.0 Unported License.