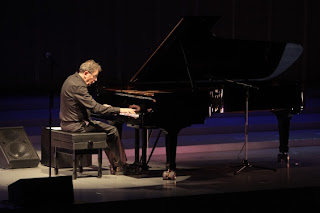 
On Wednesday night, May 25, 2011, I went to Casa da Musica to listen the American pianist Philip Glass playing 30 years of his music. He is one of most famous composers of the 20th century.


He studied with Ravi Shankar, the greatest Indian musician of the 20th century.
Soundtracks like "The Hours", "The Illusionist", and others are in our best memories.

The Guilhermina Suggia hall was complete. Even the space of chorus was open to the public and all the seats occupied.


Five themes and two encore were performed during 90 minutes without any interruption.  In an very intimate concert.

The audience deeply applauded his talent! The contemporary minimalist composer was grateful. And we were so touched by his art! And his simplicity!

A wonderful composer to listen and understand in Music curriculum.


(in a pleasant Sunday afternoon)