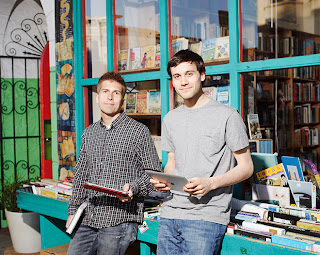 "I am so thrilled that Our Choice has come to life on iPad, iPhone, and iPod touch" (...) "Readers can now learn about the solutions to the climate crisis using some of the most visually compelling and interactive technology available."

Gore wanted his book app to contain videos, diagrams and other forms of multimedia that would flex on iPad, iPhone and iPod.

Gore’s book, which lives in the App Store since April 28, is in part a demonstration of the capabilities of Push Pop Press, (San Francisco, USA) Mike Matas & Kimon Tsinteris new company. They were Apple formal engeneers.

"It’s a bit like walking through a digital museum. When you first launch the app, you see a cover of a 3-D animation of a spinning globe with the title superimposed over it. Tapping into the intro plays a video of Gore introducing the book’s topic."

"I'm excited to announce my new app, Our Choice is going on sale today. It is a fully interactive full-length book App that describes all of the solutions to the climate crisis with animations, interactive info-graphics, pictures, audio, text, an hour of documentary video and more. I am donating 100% of the proceeds I would otherwise receive to the Alliance for Climate Protection."

A rich app to motivate the students for Climate change in Sciences, Geography, Civics classrooms!


It's impossible not to share such a wonderful interactive book! I would like to have this type of e-textbook in my classroom. And of course, my students too.


"It is now abundantly clear that we have at our fingertips all of the tools we need to solve the climate crisis. The only missing ingredient is collective will."

Al Gore: Our Choice, a digital book by G-Souto is licensed under a Creative Commons Attribution-NonCommercial-ShareAlike 3.0 Unported License.