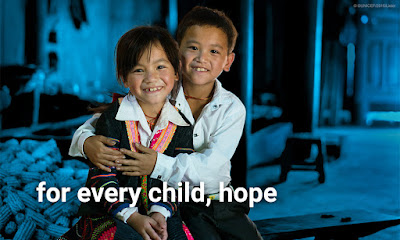 
"Every child has the right to grow up healthy and strong, to be educated and protected, and to have a fair chance in life." 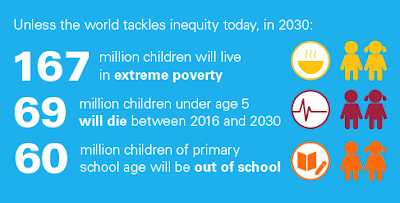 "Mothers and fathers, teachers, nurses and doctors, government leaders and civil society activists, religious and community elders, corporate moguls and media professionals as well as young people and children themselves can play an important part in making Universal Children's Day relevant for their societies, communities and nations."

United Nations
Universal Children's Day offers each of us an inspirational entry-point to advocate, promote and celebrate children's rights, translating into dialogues and actions that will build a better world for Children.

"In the current stressful times, greatest joys of life are often hidden in simple things, thus I would like to teach everyone to take time to enjoy every moment of life and appreciate the simple things around us."

Google is marking the day with a Doodle in its search engines around multiple countries, the UN children's body, Unicef, launched a short stories week to celebrate the day and to mark the agency's 70th anniversary. 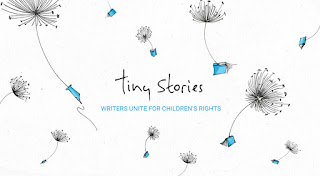 Tiny Stories
https://www.unicef.org/tinystories/
More than 200 prominent writers penned "tiny stories" - each around seven lines long - to highlight Children’s Day and the challenges many of the world's poorest and most disadvantaged children still face. 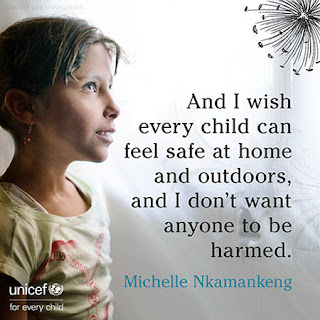 Michelle Nkamankeng, South Africa
https://www.unicef.org/tinystories/
“As writers we are able to advocate through the simplicity of storytelling. With this worthy and necessary campaign, we advocate for the protection of the rights of precious children all over the world,”
Nigerian author Chimamanda Adichie

“It is shocking to see that the lives of many children are still so heavily impacted by the horror of conflict, inequality, poverty and discrimination. I hope these Tiny Stories can remind the world that we must sustain our commitment to all of these children whose lives and futures are at stake,”
Paloma Escudero, Unicef 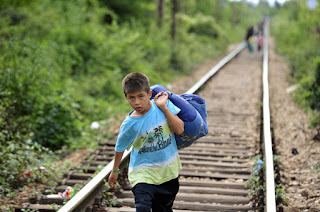 A boy tracking on railway tracks to cross
from the Former Yugoslav Republic of Macedonia into Serbia
credits: UNICEF/NYHQ2015-2203/Georgiev
http://www.unmultimedia.org/radio/
Some 50 million children have been uprooted from home, more than half by conflict, the UN Children's Fund, UNICEF, said in September 2016.
In a new report on the global challenge, the agency highlights that children and youngsters make up a growing proportion of those seeking shelter outside their countries of origin.
UNICEF Executive Director Anthony Lake said Universal Children’s Day was "an annual opportunity to recommit ourselves to protecting the rights of every child".
"These children are the future leaders of their societies. The future engines of their national economies. The future parents and protectors of the next generation.
“When we protect their rights, we are not only preventing their suffering. We are not only safeguarding their lives. We are protecting our common future.” 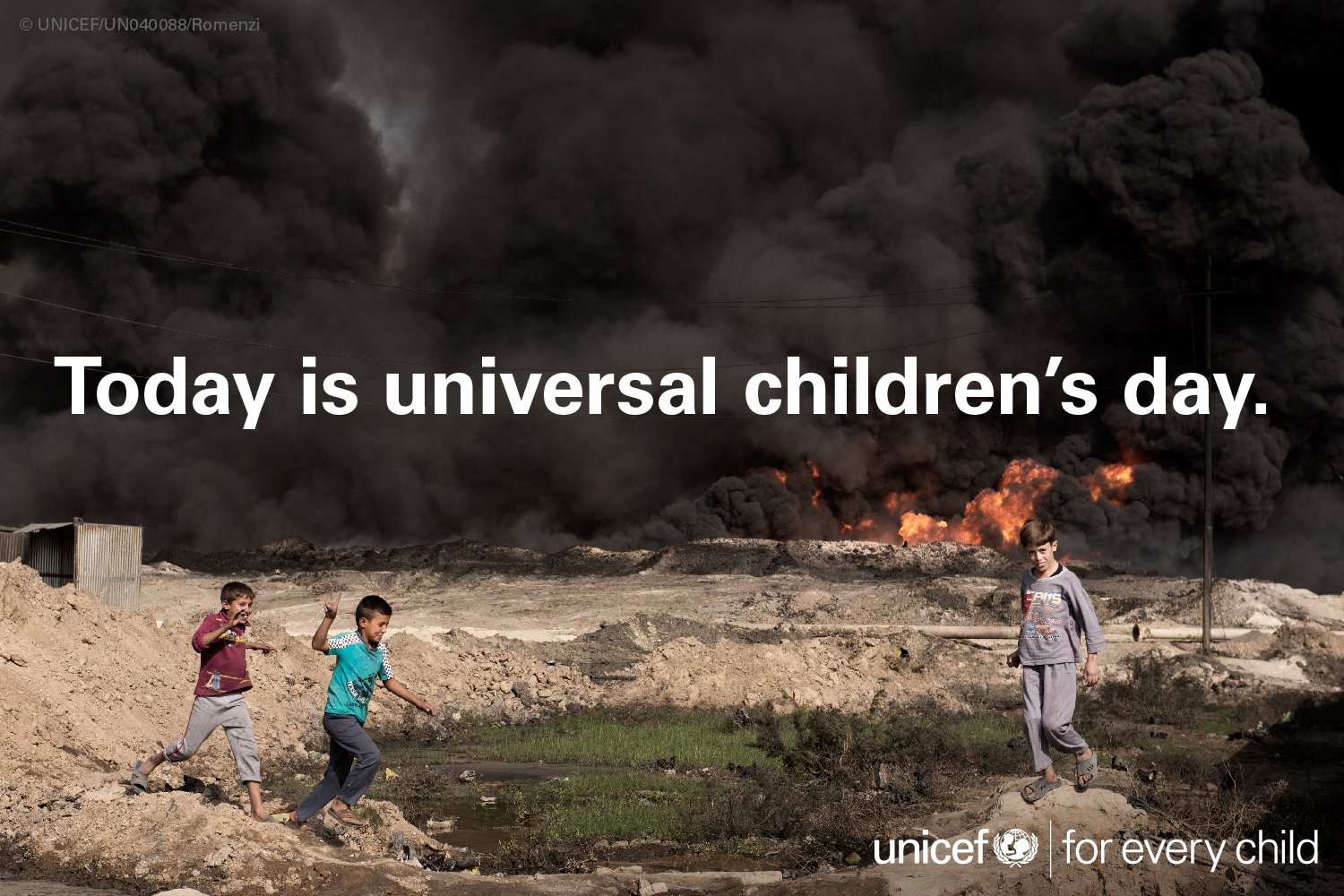 https://twitter.com/unicef
Education:
"We must confront the truth that around the world the rights of millions of children are being violated"
@UNICEF


In many developed countries, children have never had it so good, with access to education, health care, the internet and much more.
But millions more are facing unprecedented upheaval. More than 50 million children have been uprooted from their homes due to conflict, poverty and climate change while millions more face violence in their communities. According to the UN, around 263 million children do not attend school and last year nearly six million children under five died from mostly preventable diseases. 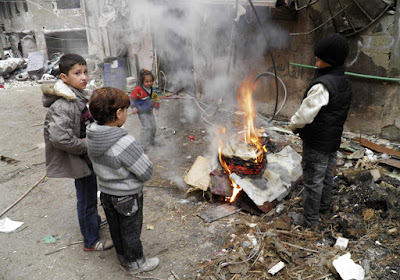 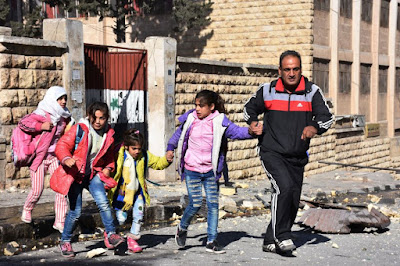 Children evacuated from a Syrian school
credits: Getty Images
https://www.thesun.co.uk/
Inside Syria, more than 2 million children and adolescents aren’t in school, while 600,000 school-age refugees don’t have access to learning, according to UNICEF.
The situation is particularly precarious inside the war zone where there’s a shortage of teachers and textbooks, and school buildings are fair game for battle. Last year alone, at least 160 children were killed in attacks on Syrian schools, according to UNICEF.
“They’re being violated around the world, in every country, wherever children are the victims of violence, abuse and exploitation,"

Even today, seven children were killed as Aleppo hospital – where kids were being treated for a brutal gas attack – is blown to pieces by Syrian warplanes.
"On this Children’s Day, we must confront the uncomfortable truth that around the world, the rights of millions of children are being violated every day," Anthony Lake, Unicef Executive Director, said.

Schools and teachers use the day to tell students about their rights as kids. Students are encouraged to think about the differences between themselves and others as well as children in other countries who are less fortunate. And so many die. 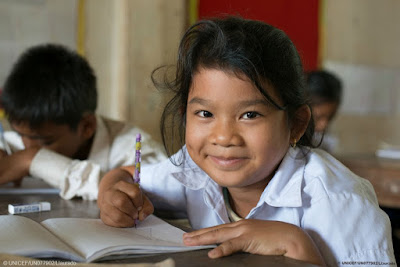 credits:  UNICEF/UN019996/Gilbertson VII Photo
https://www.unicef.org/
Some words from the UNICEF report:
In rich and poor countries around the globe, education has long served as a great leveller of opportunity because it helps people realize their potential and contribute to their communities and the world. Good education increases knowledge, sparks innovation, builds skills that drive growth and prosperity, and fosters inclusive societies.
For generations, quality and equitable education has provided children with a pathway out of deprivation. What has been true for the prospects of individual children has also held true for the future of nations. And yet, millions of children around the world are still denied their right to education because of factors they do not control – factors such as poverty, gender, ethnicity, disability or geographical location.
Extreme poverty, armed conflict, natural disasters and the impacts of climate change also deprive children of the chance to go to school and learn. 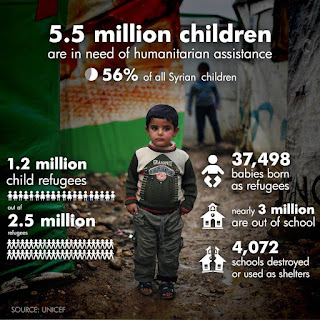 Infographic: Syria Children's of War
credits: Jerome Delay / AP Images for NBC News
source: UNICEF
http://media3.s-nbcnews.com/
Some thoughts:
Teachers in their own countries have a crucial role on the alert of poverty cases among their students.

Many schools and other educational institutions make a special effort to inform children of their rights according to the Declaration of the Rights of the Child and the Convention on the Rights of the Child.
Teachers alert their students to armed conflict countries, natural disasters and the impacts of climate change which deprive children of the chance to go to school and learn.
The evidence is all around us. All this affect children disproportionately, and the most disadvantaged and vulnerable children most of all.
"Children who do not have the opportunity to develop the skills they will need to compete as adults can neither break these vicious cycles in their own lives nor give their children a chance to fulfil their potential. Their societies, too, are deprived of the full contribution they might have made."

“It does not matter how slowly you go as long as you do not stop.” Confucius