April rundown of the most read posts 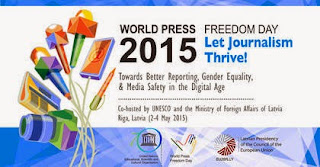 Last Sunday, 3 May, Unesco celebrated the World Press Freedom Day. The theme highilited "Towards Better Reporting, Gender Equality, & Media Safety in the Digital Age."
Every year since 1993 which celebrates the fundamental principles of press freedom; to evaluate press freedom around the world, to defend the media from attacks on their independence and to pay tribute to journalists who have lost their lives in the exercise of their profession.


How nice! Google celebrates today Nellie Bly with a doodle honoring the 151st birthday of avant-garde journalist , and I cannot love it more!

"Throughout her life and career, Nellie Bly spoke up for the underprivileged, the helpless and minorities, and defied society’s expectations for women. We love her adventurous spirit, and we share her belief that women can do anything and be anything they want. So when it came time to honor Nellie with a Doodle, we wanted to make it special.

Karen O of the Yeah Yeah Yeahs wrote, composed and recorded the original song about Nellie Bly to celebrate this intrepid investigative reporter”

Do yourself a favor and take a minute to check out this outstanding tribute!

Two subjects - press freeedom and gender equality - both in one World Press Freedom Day that teachers can introduce into the curricula. Nellie Bly is a great topic to debate in the classroom.
Now, let's back to the theme of this post.

As well, at the end of every month I put together a list of the most popular posts of April. You will have posts written in English, French and Portuguese.

Wherever you are, I hope that those of you back to school last week, after Spring holiday, have the courage and enthusiasm to go ahead with new subjects.

As you know Finnish schools are embracing a radical approach to teaching. One major initiative is to encourage teaching by topic instead of by subject.

Hope will you feel inspired in one or two subjects published on April on my blog. I think so! Numbers are great!

April rundown of the most read posts by G-Souto is licensed under a Creative Commons Attribution-NonCommercial-NoDerivatives 4.0 International License.
Posted by G-Souto at 3:00 PM