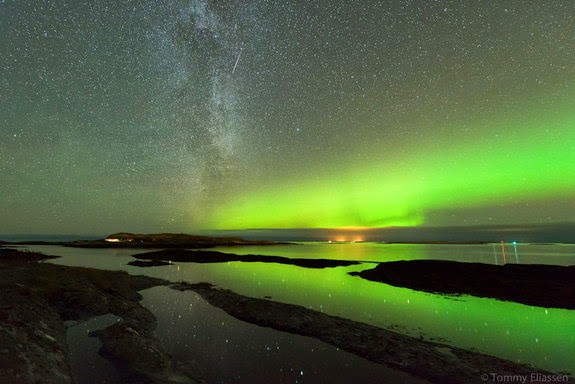 Tonight (October 21-22, 2014), could we see meteors in the annual Orionid shower?
Scientists say that we have a good chance, even though this morning before dawn might have presented the peak numbers.
Perhaps "the year's best meteor showers occurs in October: the Orionids, which result when Earth plows through debris shed over the years by the famous Halley's Comet.
This year, the Orionids peak overnight from Oct. 21-22. Stargazers under dark, clear skies can expect 20 or so meteors per hour after midnight, NASA officials said. 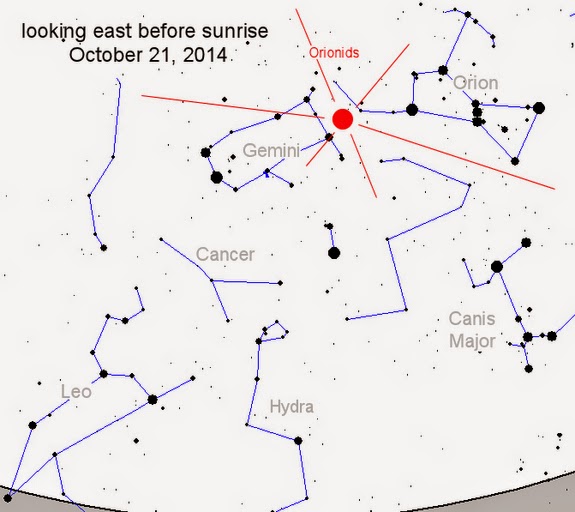 About the Meteor Shower:

The Orionids, which peak during mid-October each year, are considered to be one of the most beautiful showers of the year.

If the meteors originate from Comet Halley, why are they called the Orionids?

The answer is that meteors in annual showers are named for the point in our sky from which they appear to radiate. The radiant point for the Orionids is in the direction of the constellation Orion the Hunter. Hence the name Orionids.

Orionid meteors are known for their brightness and for their speed. These meteors are fast - they travel at about 148,000 mph (66 km/s) into the Earth's atmosphere.


Fast meteors can leave glowing "trains" (incandescent bits of debris in the wake of the meteor) which last for several seconds to minutes.

The Orionids are also framed by some of the brightest stars and planets in the night sky, which lend a spectacular backdrop for theses showy meteors. 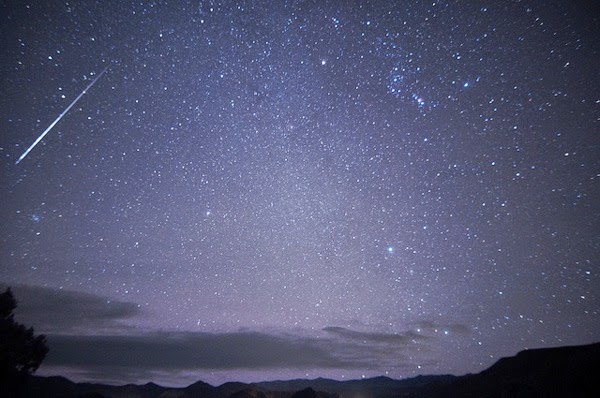 Possible Orionid meteor moving by the Gemini stars Castor and Pollux
The constellation Orion the Hunter is found at the upper right and the star Sirius below Orion’s Belt
Image: via Mike Lewinski
http://en.es-static.us/

Skywatchers could get good looks this month at several different planets. In early October, for example, Mars and Saturn were visible low in the southwestern sky in the evening. Jupiter, meanwhile, is king of the predawn hours throughout the month.

The shower may be active for several days before or after its broad maximum, which may last from the 20th through the 24th.

Step outside before sunrise on any of these mornings and if you catch sight of a meteor, there’s about a 75 percent chance that it likely originated from the nucleus of Halley’s Comet.

After peaking on the morning of Oct. 21, activity will begin to slow, dropping back to around five per hour around Oct. 26.

The best time for viewing for these fast-streaking Orionid meteors is between midnight and dawn. That time holds true no matter what time zone you’re in.

In 2014, virtually no moonlight will interfere, as the slender lunar crescent wanes toward new moon.

How many meteors can we expect to see?

The number of meteors we will see in any meteor shower always varies greatly depending on when and where we watch. Meteor showers are not entirely predictable. That’s the fun of them!

At most – on a moon-free night – we might see about 25 meteors per hour, or one meteor every few minutes, during the Orionid peak.

The dark skies make 2014 a favorable year for watching the Orionid meteors tonight.

Education:
Most of us are excited about Orionid shower. Science students too. Do you remember the Perseid meteor shower in August 2013? What a sky show full of stars.

But this time, teachers and students are in school time. So, science curriculum will be enhanced with the help pf this incredible event.

Do you want a better science lesson ?

During skywatching, teachers, students can do some good shots, or videos with iphones, smartphones or tablets to discuss the theme tomorrow or next lesson. May be compare it with the Perseid meteor shower of last year?
Meteor showers aren’t just one-night events. In fact, they can last for several days nutil Friday.
Fortunately, in 2014, the slim waning crescent moon rising shortly before sunrise is not in the way and will only enhance your enjoyment of the meteor shower if you find yourself out before dawn.
Resources :