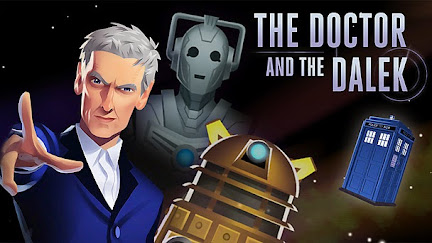 Dr Who and The Dalek | BBC
computer game
https://dalekhack.microbit.org/

As you remember, the second edition of Code Week EU 2014 is over last Thursday, October 17th. And it was a big success for all over the 38 European countries.

During the past week there have been more than 3 000 events around Europe prompting thousands of people make apps, websites and lots of other things by helping them learn to code.

You can read the last news on Code Week EU 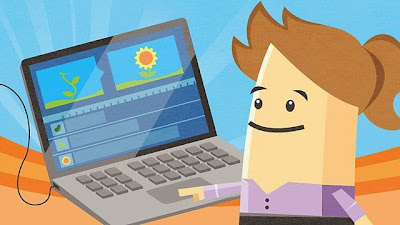 BBC computer & coding content for children
https://www.bbc.co.uk/
Oh! Today we have a big surprise. Teachers and students, specially in the United Kingdom will be very happy.
Do you know Dr Who? Remember Google special Doodle, a videogame to celebrate Dr Who's 50th Anniversary last year? 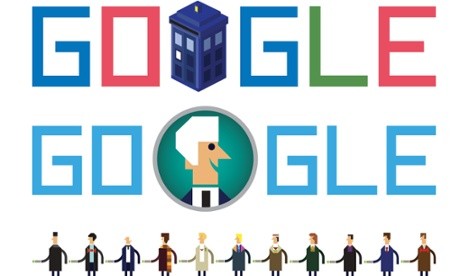 Google Doodle Dr Who's 50th Anniversary
https://www.google.com/doodles/
The Doctor Who Doodle started life as a request from a huge fan at Google. The Portuguese engineer Rui Lopes, one of the programmers who worked on the project. It seemed daunting- 11 Doctor's, 50 years of adventures, countless enemies and time travel!
"But we loved the idea of science fiction, technology and fun coming together, so we set about creating a multiple level game. The game was always a simple premise- those dastardly Daleks have stolen the Google letters and we need Doctor Who to retrieve them."
Doodlers team
Click the start arrow to choose one of 11 Doctors, each a cute 2D version of the actors that have played the show's lead role, and then guide them around isometric versions of appropriately Whovian settings to collect the letters to spell "Google."

https://www.google.com/doodles/
Click the start arrow to choose one of 11 Doctors, each a cute 2D version of the actors that have played the show's lead role, and then guide them around isometric versions of appropriately Whovian settings to collect the letters to spell "Google."
Mini versions of Daleks, Cybermen, and inappropriately terrifying Weeping Angels block your route. Die and — as in the series — you'll regenerate, cycling through a list of Doctors that includes a wildly grinning Matt Smith, and a bouffant-headed Tom Baker with his trademark torso-length scarf.
See? This is a video game that you enjoyed by playing. And if you could learn to code? Learn with Dr Who! 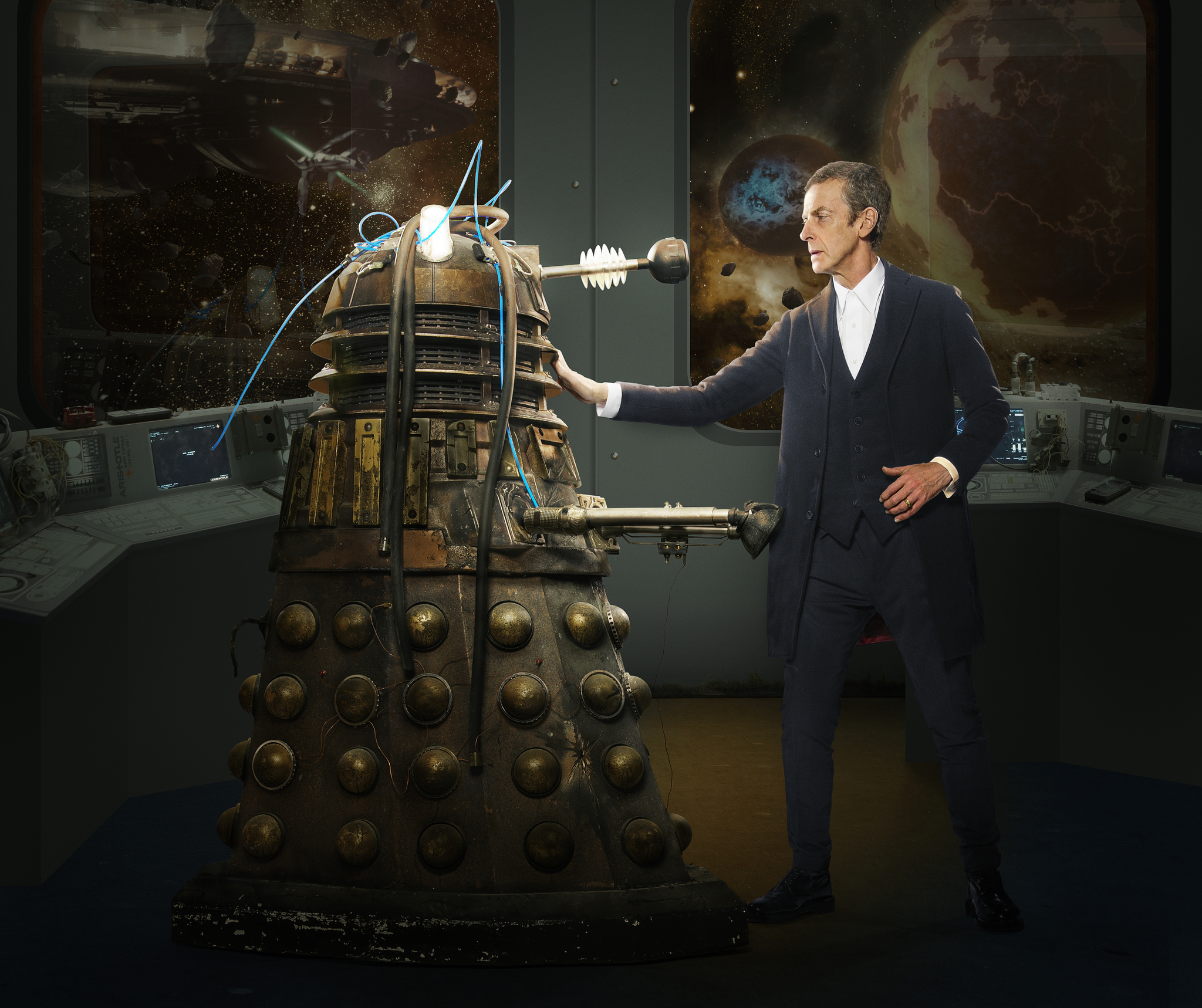 Dr Who and the Dalek
https://dalekhack.microbit.org/

Dr. Who computer game! Wow, young people will be surprised to learn coding from Dr. Who and the Dalek.

As you know from the start of the new school year, children as young as five will be learning programming skills in the classroom in England.

From September 2014, England has the most ambitious attempt to get kids coding, with changes to the national curriculum. ICT – Information and Communications Technology – is out, replaced by a new “computing” curriculum including coding lessons for children as young as five.

Dr Who and The Dalek | BBC
computer game
http://www.bbc.co.uk/

"A high-quality computing education equips pupils to use computational thinking and creativity to understand and change the world. Computing has deep links with mathematics, science and design and technology, and provides insights into both natural and artificial systems."
in National curriculum in England: computing programmes of study, GOV.UK

The BBC has unveiled the computer game called The Doctor and the Dalek, as part of the Make it Digital initiative to get more young people into computer coding.

The Doctor and the Dalek wants to help children learn programming skills.

The coding challenges are linked to the curriculum and can be mapped against Key Stage 2 and Key Stage 3 learning outcomes. 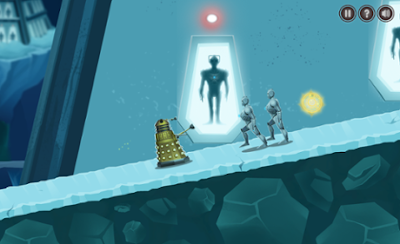 Children power up the Dalek to help it survive in the main platform game
Screenshot: BBC Photograph: BBC
https://static.guim.co.uk/

This is really cool, especially if you’re a Doctor Who fan. Linking up its longest running show with its new coding initiative, the BBC announced a new Doctor Who-themed game designed to teach the basics of coding to kids.

“The BBC has unveiled a computer game called The Doctor and the Dalek, as part of the Make it Digital initiative to get more young people into computer coding,” the broadcaster said on its site.

Launched earlier this year, the Make It Digital initiative aims to “shine a light on the world of digital creativity and coding”.

To support primary and secondary schools across the UK, and to coincide with the new computing curriculum in England,

Children will be combining instructions to accomplish a given goal, using variables to alter behavior, exploring repetition and loops, and using their logical reasoning skills in order to rebuild the Dalek.

For the broadcaster the initiative is a chance to inspire a new generation of coders and computer pioneers to follow in the long history of the country, with creators such as Ada Lovelace, Charles Babbage and Sir Tim Berners-Lee.

This isn’t a TV show, however: it’s a game due to launch on Wednesday 22 October on the broadcaster’s CBBC website (UK only).

The Doctor and the Dalek includes voice narration from current Doctor Peter Capaldi, and a new story by Phil Ford, who has written for the TV show.

Dr Who computer game will be available freely at bbc.co.uk/cbbc (only for England) from Wednesday 22nd October.

The web game is aimed at 6-12 year-olds, and involves freeing a battered Dalek from a ship of Cybermen, then building it back up to full strength through puzzles based on the programming elements of the new English computing curriculum.

The Doctor Who game will follow a series of coding challenges that are linked to the curriculum and “can be mapped against Key Stage 2 and Key Stage 3 learning outcomes,” 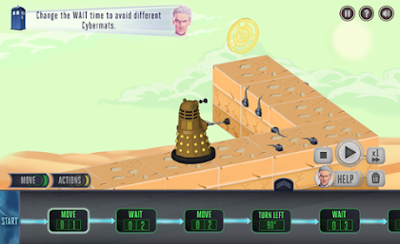 The Doctor and the Dalek’s puzzles are based on the new computing curriculum in England
credits: BBC Photograph: BBC
http://static.guim.co.uk/

The BBC has also created material for parents and teachers to accompany the game, which also tie in to the new computing curriculum in England.

We wanted the game to be something that could help teachers in the classroom as well,” said Pearce. “Teachers are getting their heads around this new curriculum, so it was a big aim for us to do these teaching packs.”

This is about have-a-go digital literacy: making, creating. It’s not all just about programming: it might be having a go at a robotics challenge, or 3D printing, or experimenting with digital design or animation,”
“We’ll also be taking an unplugged approach in the real world, helping people to feel inspired around computational thinking even when they’re nowhere near a computer.” 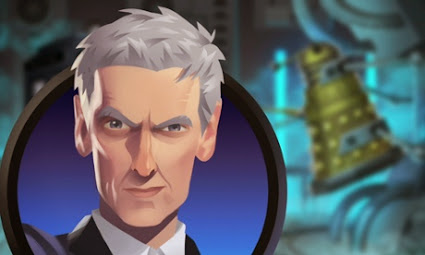 Education:
This is a really cool initiative, especially given the amount of time children spend watching TV and playing computer games.

It will also be very useful for adults, teachers, parents, who are keen to learn the basics of programming.

Teaching programming skills to children is seen as a long-term solution to the “skills gap” between the number of technology jobs and the people qualified to fill them.

So, who is ready to play Doctor Who and the Dalek? We hear this Dalek is friendly. Of course ! Everybody is ready, in school !

Children love games. And they will learn coding in a creative and funny way, in the classroom. Learning to code gives young students a powerful way to explore their ideas and make things, both for work and play.

"Our new education resources are designed to give a hands on approach through a range of great animation, video and interactive games that we hope will really engage and entertain whilst also enabling our audiences to develop key digital skills."
Sinead Rocks, Acting Head, BBC Learning
G-Souto

Schools : Kids, are you ready to code with Dr. Who ? Let's see ! by G-Souto is licensed under a Creative Commons Attribution-NonCommercial-NoDerivatives 4.0 International License.