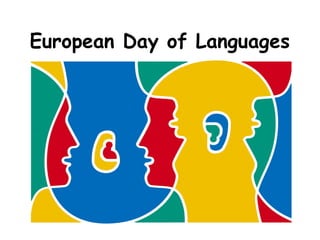 "Europe is rich in languages – there are over 200 European languages in daily use and many other languages are spoken by citizens whose family origins are in other continents.

Respect for cultural and linguistic diversity and support for language learning are at the core of the work of the Council of Europe."

Following the success of the Year, the Council of Europe declared a European Day of Languages  to be celebrated on 26th of September each year.

"Linguistic  diversity is an important resource to be recognised, valued, used and cherished. Language learning brings benefits to all ages – no one is too old to learn a new language and  enjoy the opportunities it opens up. Learning other peoples' languages is another way of helping us to understand each other better and overcome our cultural differences." 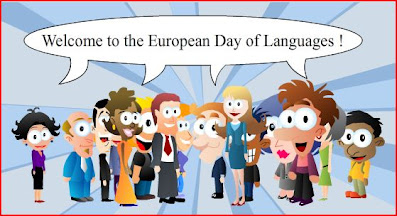 "Plurilingualism is much more the normal human condition than monolingualism. There are millions of people who think they know no language other than their mother tongue; however many of them know some level of another language. And yet the opportunities to learn a new language are today greater than ever."

On the occasion of the European Day of Languages, a range of events are organized across Europe.

Activities for and with children in schools, television and radio programmes, language classes and conferences.

In order to learn more about language diversity students can take part in different activities proposed by their teachers or following a school project.
Of course, it is important that you include ICT & social media into your lessons, such as:

In the classroom - Some Activities:

* In French and Portuguese curriculum, my students had good exchanges with students from several European schools from Austria, Romania, Spain, Italy, Switzerland (by email or/and by letters), and a school exchange project with Holland. Read some impressions about this last one.

* Blogs are an interesting activity to include IT into Languages curriculum (mother language or/and foreign languages)
In 2005, a group of students aged 10-13 started a blog as an activity for the European Day of Languages.
Dia Europeu das Línguas 2005 was the first project IT & Languages in secondary education.
By groups, they chose a country and elaborated a post where it should appear  the word "Hello" (translated), the flag and a tradition. You can watch here for example, but feel free to watch other ten countries in different posts.
Among the students, there was some students with special needs, and they really were well integrated in the activities.
In 2006, 2007, different students continued the project. In 2008, we celebrated The International Year of Languages

Students like to communicate and interact with other students from European schools and countries, So, they can get a taster of the various languages of Europe.

There are a vast number of ways in which you can celebrate the European Day of Languages depending on the level you teach, the time and means you have available.

How to promote:
Your school wants to promote the events of your students? Right! Fortunately there's plenty you can do to publicize your initiative. Let's give it a start here

National authorities and the various partners are given a free hand to organize activities.

To coordinate the activities organised at national level, the Council of Europe asks participating countries to nominate National Relay Persons for the EDL.

The function of a Relay is to act as a multiplier for organizations, schools and association.

"Everybody deserves the chance to benefit from the cultural and economic advantages language skills can bring. Learning languages also helps to develop tolerance and understanding between people from different linguistic and cultural backgrounds."

Let's Celebrate the European Day of Languages by G-Souto is licensed under a Creative Commons Attribution-NonCommercial-NoDerivatives 4.0 International License.
Posted by G-Souto at 11:30 PM