June: rundown of the most-read posts 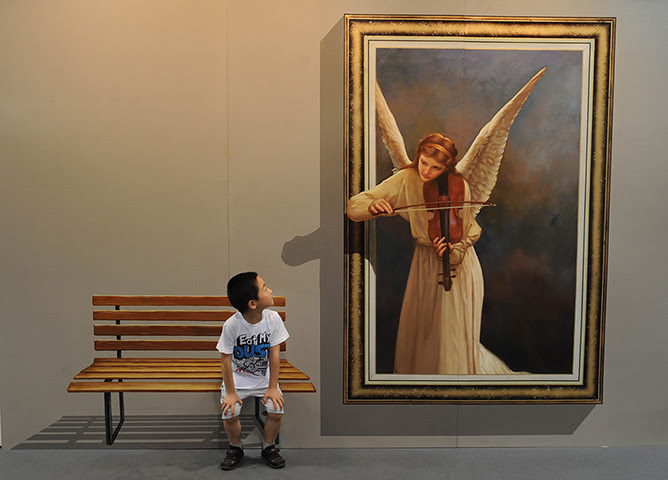 "How wonderful it is that nobody need wait a single moment before starting to improve the world."

The quote identifies the values of some of my pedagogical proposals introduced in school curricula and shared with you throughout the years on this blog.

I believe and practice the differentiation as a value too by focusing on individual identity of my students. They are free to be creative by discovering 'by and themselves' with my guidance, just the sufficient to let them more comfortable in their learning. I wrote about it on the differentt posts of my blog.

The classroom is an open window to the world. Students must feel free to talk  and share ideas about all the subjects they care about in and around every curriculum.

Child Poverty in Developped Countries: Chidren's Day was the most-read post June, not for the for best reasons... unfortunately!
"As debates rage on austerity measures and social spending cuts, a new report reveals the extent of child poverty and child deprivation in the world’s advanced economies.

Reading this report and watching the video, as an educator, today, I must write about the new poverty among our students in our schools, in our countries.

Children's Day is usually marked with speeches on children's rights and wellbeing, and other events involving or dedicated to children. This is the time.

Teachers stimulate their pupils to think about the differences between themselves and others and explain the idea of "rights". In countries where the rights of children are generally well-respected, teachers may draw attention to situations in countries where this is not the case.

Now, teachers help students draw attention to situations like students living below poverty line in their own schools, or countries. (...)

The 6 June transit will start at approximately 00:04 Central European Time (CET). It will then take about 20 minutes from the point when Venus first bears upon the disk of the Sun.

New technologies, like the free Transit of Venus phone app, will allow individuals to send their observations of the 2012 transit of Venus to a global experiment to measure the size of the solar system.

Ipads ans smartphones on the desk! A wonderful animation can be watched on BBC Venus to put on Sun Spectacular.

In classroom, students are invited to use their devices watching BBC animation or NASA videos for an open debate on the subject with colleagues and tutoring by educators.

My students were invited to write a post on their green blogs. Please read here and here

Students are invited to join astronomers and skywatchers at national observatories of Astronomy, observing the transit of Venus and snap some photos to explore in the classroom. 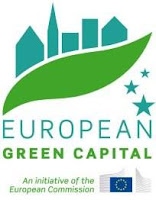 http://ec.europa.eu/
"Because we don't think about future generations, they will never forget us."

"European Green Capital Award" aims to reward progress made and to encourage cities to commit to future environmental improvement and sustainable development.
The awarded cities also provide a role model to inspire other cities and promote best practices and experiences in all other European cities.

Education:
"Our parents were the anti-war generation. Our generation is the environmental generation"

Edward Norton, actor and UN goodwill ambassador for biodiversity
All teachers must be "green" and help the new generations to involve in educational projects, national or international, about Environment.

Schools have an important role promoting environmental education as a Civics value across all school curricula.

Students will evolve in creative "green" projects  that they will share with families, friends, schools and their own cities.

"Youth Future and the Dialogue Between Generations"

A Sea of Words: Euro-Mediterranean Contest was aimed of contributing to the encouragement of dialogue between peoples, and exchange of knowledge and experiences between different local and international traditions.

In the framework of the European Year for Solidarity between Generations, 2012 theme is aimed at "promoting the vision and expectations of young people about their future and the contact between different generations of Euro-Mediterranean societies."

Young people from the 42 countries of the Euro-Mediterranean space.

The contest is aimed at the production of short stories focusing on the issues of children, parents and grandparents facing the future, with the objective of showing the different sensitivities and realities in the Euro-Mediterranean region, from the point of view of the youths who live there.

It is always interesting to participate in an intercultural project and share your own traditions with other people that live in the Euro-Mediterranean region.

"The children concerned in child labour should be at school being educated, and acquiring skills that prepare them for decent work as adults."

By entering the labour market prematurely, they are deprived of this critical education and training that can help to lift them, their families and communities out of a cycle of poverty."

Human rights and social justice? Let's end child labor! June 12th is intended to serve as a catalyst for the growing worldwide movement against child labour, to highlight the plight of child labourers and what can be done to help them.

Today is World Day Against Child Labour. So, here I am writing again about Human Rights and the right of all children to be protected from poverty and from child labour, another violation of fundamental human rights. 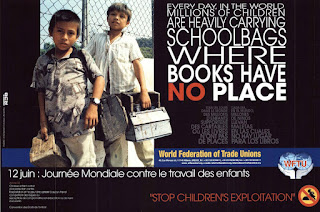 Hundreds of millions of young people, girls and boys throughout the world are engaged in work that deprives them of "adequate education, health, leisure and basic freedoms", violating their rights.

Of these children, more than half are exposed to the worst forms of child labour such as work in hazardous environments, slavery, or other forms of forced labour, illicit activities such as drug trafficking and prostitution, as well as involvement in armed conflict.

Teachers and students worldwide are speaking out against child labour in the classroom and taking action to raise further awareness of this issue out school.

They are spreading knowledge among their peers, acting as a voice for those children whose rights are not respected and calling on decision-makers to act urgently to protect children in danger.

In partnership with the Commonwealth of Learning (COL) and through the  support of the William and Flora Hewlett Foundation, UNESCO is organizing the 2012 World Open Educational Resources Congress. UNESCO World OER Seminar and exhibit will take place next week, June 22-24 2012 in Paris.
"To provide an opportunity to civil society organizations, academia, and individual experts to present on their Open Educational Resources initiatives, UNESCO is organizing a parallel Open Seminar & Exhibition from 21 to 22 June 2012 in UNESCO Headquarters, Paris, France."

It was my honor to attend the UNESCO World OER Congress and participate at the Seminar. At the Exhibition, I presented an academic Poster about a research on the use of OER in Secondary Education.

I really hope that you will enjoy every pedagogical proposal written in June or will discover some new pedagogical ideas to introduce in your lessons.

I thank you very much to all the colleagues from around the world that kindly read my blog.

June: rundown of the most-read posts by G-Souto is licensed under a Creative Commons Attribution-NonCommercial-ShareAlike 3.0 Unported License.