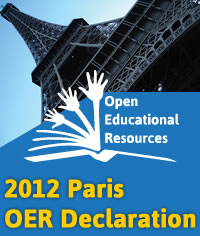 The 2nd World Open Educational Resources Congress took place June 20-22, 2012 in the UNESCO Headquarters, Paris, France. It was organized by UNESCO in full partnership with the Commonwealth of Learning (COL) and a generous grant from the William and Flora Hewlett Foundation (USA).

"UNESCO believes that universal access to high quality education is key to the building of peace, sustainable social and economic development, and intercultural dialogue. Open Educational Resources (OER) provide a strategic opportunity to improve the quality of education as well as facilitate policy dialogue, knowledge sharing and capacity building."

Over 500 delegates including representatives of Government, educators, NGOs, and universities attended the Congress.

The agenda was complete and full of wonderful key-speakers. Many of the speakers highlighted the ways in which OERs are being used to innovate and improve local communities.

The conference was a two-part event that included the official Congress, with a negotiation component by UNESCO Member States (Room XI), and an Open Seminar that featured cutting-edge examples of OER practices through numerous workshops and seminars (Room XII).

It is impossible to speak about all the speakers and workshops. We were divided between two rooms.
So, I decided to share with you some considerations about OERs and some ideas of two or three speakers that impressed me the most.

The 20 June, during the Pre-Congress event, Neil Butcher, OER Strategist (South Africa) was a splendid speaker introducing to OER concept: "Beginners guide to OER, an introduction to OER and some of the keys issues to think about when exploring the use of OER". The introduction was followed by an open debate in the room and on Twitter.

I am not a beginner on OERs (Secondary Education - High School) but I really liked this debate that clarified some important issues for some of the participants.

Later, June 22, Neil Butcher took his place as "a realist" on the interesting debate "Idealists versus Realists" on the Future of Open Edicational Resources (OER) - Mainstreamiing and Partneeships" in a group of four.

"By being adaptable and accessible, OERs have the potential to solve the global education crisis and contribute to sustainable economic growth - if governments are prepared to act."

The term Open Educational Resources (OER) was coined at the 2002 UNESCO Forum on the Impact of Open Courseware for Higher Education.

"Open Educational Resources (OERs) are any type of educational materials that are in the public domain or introduced with an open license. The nature of these open materials means that anyone can legally and freely copy, use, adapt and re-share them. OERs range from textbooks to curricula, syllabi, lecture notes, assignments, tests, projects, audio, video and animation."

"The open  nature of these materials represents a powerful opportunity for learners, teachers, Ministries of Education, and higher education and research institutions to increase the quality of and access to education."

For students, OERs offer free access to some of the world’s best courses and even degree programs. They can also offer huge cost savings as alternatives to expensive textbooks.

For teachers, ministries of education and governments, OERs provide free and legal access to some of the world’s best courses. Educators can then adapt them to local languages and cultures and use them as a basis for innovation.

But you don’t have to be a teacher or a student to understand the importance of OERs. Free information is a fundamental human right, and OERs make it possible for people of all ages and backgrounds to learn more about the world around them and access the tools they need to improve their lives and livelihoods.


Dr Lawrence Lessig, Director of Edmond J. Safra Foundation Center for Ethics, Harward University (USA), delivering his keynote speech Peace at the opening of the 2012 World OER Congress was one of the best speakers, in my opinion. Incredible and spontaneous communicator that presented his approach to Open License and Ethics (a subject that divides a lot of academics). Really liked his speach. Very clear, positive and practical though pragmatic.
Starting June 21, Open Seminar and Exhibition showcases innovative OER projects from universities around the world, as well as from organizations such as Creative Commons and the SAIDE/OER Africa initiative.

Wikiwijs is commissioned by the Dutch Ministry of Education, Culture and Science to mainstream OER in The Netherlands. The platform is being created by the Open Universiteit and Kennisnet.

Over 45 posters and 100 publications, brochures, and other OER promotional materials were exhibited.
The posters demonstrate a very high level of talent and dedication to the cause of promoting Open Education. Posters are openly licensed and many have been contributed to UNESCO to set-up a permanent display. The gallery only displays a selection of posters opened licensed.

I wrote a Poster about the use of OERs in Secondary Education, following the academic rules, not a promotional poster. So, I chose  not to display it on the virtual gallery because all the posters were promotional.

Mr Abel Caine kindly suggested me that it would be a pity to display an academic Poster in a gallery with promotional posters. He was right.
He invited me to write something informal and to sent it to Unesco to be displayed. For the moment, I had no time. Perhaps later. I'm writing a scientific article to submit at a different conference.

But, my Poster was shown in small format at the Exhibition for a day during the UNESCO OER Congress. June 21-22 2012.
Finally, on Friday 22 June, the "World Open Educational Resources (OER) Congress" released the 2012 Paris OER Declaration which calls on Governments to openly license publicly funded educational materials.

The Congress was organized as an open multi-stakeholder event. Presencial and virtual participants were able to follow and participate in the sessions and directly contribute to Paris OER Declaration via live-webstreaming or through Twitter.

I think, most of  all, as an individual researcher in Education that Millenials young people brought a fantastic new vision to schools and Education (all levels now) with their visual spatial skills - screen-generation - non verbal intelligence and multi-tasking attitude into the classroom.

As a "pioneer" educator in the use of OERs in school curricula (Secondary Education) and author of some OERs to captivate my students (in and around curriculum) and in and out school to increase their skills and competencies, motivating them to go further "in order to be effective workers and responsible citizens in the social-knowledge society of the 21st century"