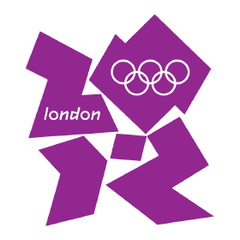 Olympic Games 2012 just start and will end during Summer season in Europe and some other continents.

In the United States and other countries, the students come back to school perhaps the final part of the Games. They will be talking about their heroes, the athletes from different sports.

Teachers are already preparing their lessons and they will include the Olympic Games into school curricula, for sure. They can't lose this wonderful experience! Such a great resource for different curricula. 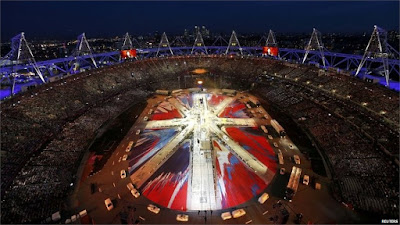 I'm sure that a lot of students will want to talk about it. English students are the luckiest because some of them are at the Olympic stadium with their parents watching live.

But there will be a great number all over the world that are watching live on television or on the Internet, day by day, their favourite athletes and sports. And the most curious will know a lot about OG to share in the classroom.

Teachers have been watching the Olympic Games too, and they are wondering how they might include the OG London 2012 into the curriculum.

As I wrote before, along July and August, I will write about some subjects that could interest teachers for the next school season.


Here are couple of ideas and resources to evaluate and share in your courses about London 2012.

How do you create the perfect flame? - An interesting question to start a Science course!

Well, the Ontario Science Centre explored the technology behind the Olympic torches - past and present shown on the video below:

Wow! That is﻿ great! You can't miss this digital resource to explore the technology behind the OG flame! I am sure that your students will love it.

The Google Earth Blog has pushed out July 27 a short list of Google Earth tours based on the Olympic Games in London. The list includes a fly-over 3D imagery for much of London, including the Olympic Park area.

Google is publishing a Doodle every day since the Opening illustrating some of the 36 sports present at the Olympic Games 2012. The Olympic Games Doodles will be an excellent digital resource to include into school curriculum.

Teachers could use Doodles to start a lesson in Sports and/or Geography curriculum inviting the students to explore the page and find all the stories about the games. It might be a simple but good motivation for cross-curricular projects.

Sports: To take it a step further, you might ask students to make a research why a country produces exceptional athletes in a given sport. For example, you might challenge students to find out why United States are strong in swimming or soccer.

Don't forget to teach about values!

Geography: Google Maps of medal distribution will start a simple Geography lesson. Invite students to browse for medal winners by countries, then research those countries. A good intercultural activity.

During the Games, you have the Official London 2012 website to explore or get inspiration by news or stories to motivate your students in your lessons.

For example the Lithuanian swimmer young teen Ruta Meilutyte said on Tuesday that she was "shocked" (in a good way) to have won women's 100 meters breaststroke gold medal on Monday.

At just 15 years old, this Olympic star had to do it the hard way, surviving a fierce challenge from American Rebecca Soni, the reigning world champion in the event. Such an inspirational true story!

Competitive diving is included in the modern Olympics since 1904. Read this incredible article Not making a splash: the anatomy of a perfect Olympic dive by Sian Barris. 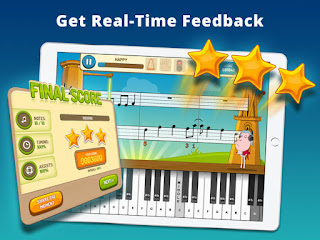 
Did you know that before sport, there was music. Music as a prelude during the 19 days of the Games London 2012

iPad has a new app! Piano Summer Games from JoyTunes. The app provides directions and feedback for playing the national anthems of forty countries.

Students and teachers can download the Piano Summer Games app here. They can compete between groups in the classroom using JoyTunes by earning points for playing the anthems correctly.

They will do wonderful progress in Music curriculum. JoyTunes could be a good piano tutor for students who have iPad.

As the opening ceremony got underway, its sense of magical realism started to remind us many of recent fantasy films or English fiction and fairy tales.

The Lord of the Rings featured strongly in initial history of Britain about how much the "green and pleasant land" reminded people of the Shire.

There was Harry Potter saga in part driven by the participation of JK Rowling reading a short text in the Opening Ceremony of the London 2012, July 27.

Although the Harry Potter character Voldemort was not officially part of the proceedings, he was linked to Mary Poppins when a flashmob mass of Mary Poppins clones appeared to vanquish one of the odd monsters in the ceremony.
Inventor of the protocol upon which the Web is based, UK scientist Sir Tim Berners-Lee, live-tweeted from the stage. This is real social culture! Students might to learn more about the inventor of the World Wilde Web.
Sometimes, at the end of a lesson, we must give some 2 minutes for relax. In Portugal, we have lessons of 95 minutes. It's important to make a break and let the students have 2 minutes of fun in the middle (45 minutes) learning and playing.

James Bond and the Queen
http://i.telegraph.co.uk/

"Good evening Mr Bond," the Queen said on the clip, before they left together, apparently heading towards the Olympic Stadium in a helicopter.

There has been a great speculation if James Bond participad at the opening ceremony, and about what his role would be. At the Overture, we all watched him collecting the Queen and brought her to the ceremony in a spectacular manner. Oh! My! Just awesome! 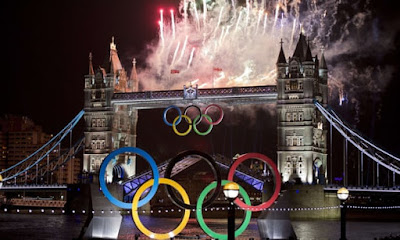 
Enjoy, preparing your lessons! I am sure that you will have wonderful plans and your students will be happy to learn in a funny way the curriculum.