One of the world's best known and long-lived international robot competitions, the low-cost annual Trinity College Fire Fighting Home Robot Contest (TCFFHRC) brought robot enthusiasts and engineers of all ages to Trinity’s campus in Hartford on the weekend of March 31-April 1, 2012.

The TCFFHRC challenge is to build a fully autonomous robot that can navigate through a maze resembling the floor plan of a house, locate a burning candle and extinguish the flame in the shortest amount of time.

The RoboWaiter contest challenges teams to design autonomous service robots to aid individuals with mobility impairment. RoboWaiter is unique because it relies on real people with disabilities in its planning and execution. Visit www.trincoll.edu/events/robot to view contest rules.

About 135 teams, including several from international countries of Portugal, Canada, Israel, Mexico, China, Indonesia and USA joined to participate in one of the contest’s divisions (Junior, Walking, High School, Senior, and Expert). 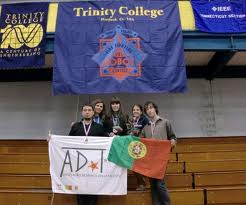 The winner in the category "Junior Division 2012" is the Portuguese team "BeeFree NewTech", students from University of Coimbra and Instituto Politécnico Coimbra, Portugal.

The winner project, "BeFree" connects the robotic and therapy for individuals with mobility impairment. 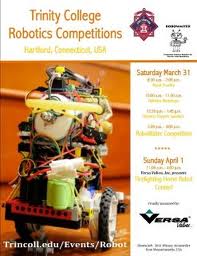 ADoT "Associação Desenvolver o Talento", Guarda (Portugal), a Portuguese association to aid gifted young people and improve the quality of their lives, supported the team. The 2011 winner team was from ADoT.

According to Dr. David Ahlgren, contest director and Professor of Engineering at Trinity College, these events encourage imagination and creativity among inventors of all ages and levels of skill, from elementary school children through retired engineers.

"The contest serves as a laboratory for invention and innovation and a focal point for science and engineering education. What is really wonderful and exciting about the contest is to see the robots in action and to feel the enthusiasm of the participants and the spectators,"

"The majority of documented courses using robotics in an instrumental way while teaching other topics are at the college and university level, robots have been used at the K-12 level education as well.


Most of the activities at this level are a form of outreach program, aimed at raising interest in higher engineering education among selected group of (usually high-school) students, but there are also activities aimed at students from socially deprived areas, where the main objective is to attract those students to some form of education at all."

As practitioners, we know that we have in the same classroom gifted learners and poor learners. Both groups need our special attention and a different motivation and activities.

From one side, students that present some difficulties in learning (poor learners), on the other side,  students that we must captivate to go further (gifted students), otherwise they will be very bored in following a linear curriculum.

On the other hand, as you could see on the winner team, there are three girls. Fantastic! It proves that girls like science and technology.

Nice example to promote Technology and Science in schools among young girls to increase their future career.
Robotics has aroused great curiosity among young people. There are many groups and robotics clubs throughout Portugal concentrated in universities, secondary schools and vocational schools.
G-Souto

The Robotics Education and Competition Foundation's
http://robotevents.com/robot-competitions/trinity-robotics-competition/
Posted by G-Souto at 5:48 PM