On Thursday night, June 9, 2011, we went to Casa da Musica to listen, during the event Clubbing, the Portuguese band The Gift perfoming the new album Explode. 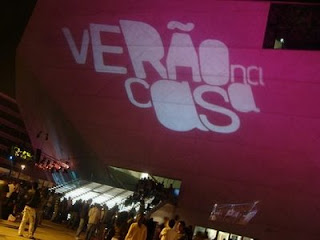 The Gift is one of most succeed bandwell known in Portugal and other countries as Spain, Canada (Toronto) and United States (New York).

"Arguably, they’ve built a small empire around high-drama, English-language anthemic indie rock by garnering sponsorships, opening for the likes of Flaming Lips in the US, and becoming the “first Portuguese band to X” - X being everything (like getting a spot on MTV UK)".

The Guilhermina Suggia hall was complete! A lot of people on stairs just applauding, singing and dancing on every theme of Explode and some 'classical' songs of the band as several 'encore'. The band hit the stage!

Frontwoman Sonia Tavares, a true diva who had crooned and high-kicked through a demanding hours-long set: “Do you want more? Dance and sing to us because we’re going to play until going directly to Toronto fly…”

The audience wedeeply applauded the talent of the band and this album, very explosive! Sounds, colours, talent!

Positive thinking and bright colors are The Gift’s hallmarks, right down to the pastel keyboards.

For Explode, they based their album art around a trip to the Holi festival in rural India, where they were doused from head to toe.

Music has an important role among young people. Students like to discuss the music they hear. And they like to have some new ideas about new music groups.

Wonderful resource to share with students. You can explore music and civilization.

The Gift | Explose | Poras Chaudhary
http://www.thegift.pt/
“We always wanted this album to be an explosion of color, of joy, of happiness, and positivity,” John said. “It was the perfect location… we were there a week celebrating the festival with a local photographer in the temples, throwing the traditional colored powder at each other. All the while we understood that all of the people around us were so happy with so little.”
Nuno Gonçalves (keyboards & voice)
Explode which hit number 1 in Portugal album sales. Here the playlist.


An amazing night of indie rock, a lots of colour, joy and dancing where the seats were no barrier!


(in a pleasant Sunday afternoon)

Sunday time: The Gift by G-Souto is licensed under a Creative Commons Attribution-NonCommercial-ShareAlike 3.0 Unported License.