Well, after a short break, here I am! Oh! I know, I know, everybody has already the fresh news about Pottermore since last June 23.

Ok! But I must finish my idea about the subject. And most of all reinforce the importance of Harry Potter books in the Literature curriculum in middle school.


Fans of JK Rowling's "Harry Potter" saga waited expectantly for the announcement the author promised to make on June 23.
Rowling announced via a web video that she will be opening Pottermore, an online website for fans that she described as "an online reading experience unlike any other." So, Rowling said this is her way of thanking her fans.
"Harry's fans remain as enthusiastic and inventive as ever," she says in the video. "

JK Rowling shows shows some children the new Harry Potter website
http://static.guim.co.uk
It's true! Fans remain as entusiastic as ever. We could see it with the number of fans in the very first minutes in the accounts on Twitter and on Facebook.
According to Rowling's announcement, the Harry Potter story will be available on Pottermore, but it will be built and shaped by the readers.
The website will also be the exclusive place to buy digital audio books and e-books of the "Harry Potter" series.
"The digital generation will be able to enjoy a safe, unique online reading experience built around the ‘Harry Potter' books."
JK Rowling (in the video)

So, Harry Potter just got a new home, right? But the most important! JK Rowling will lead her readers to a new stage in the evolution of reading: web 2.0.
This is the biggest new! And the fantastic one! It's the first time that Harry Potter novels will be available in ebook formats.
Rowling has indicated that the books will be DRM-free and will be available for all ebook devices including Kindle and iPad.

We don't know yet how exactly this is going to work, but let's wait.
JK Rowling shows off too that Pottermore site which will not only have new material, but will be only place selling digital downloads of novels. 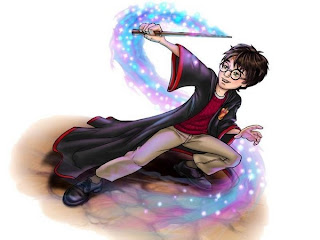 Well, I can assure that the "Harry Potter mania" brought enormous number of new readers in the Languages courses in the school, since we as educators understood the importance of reading the Harry Potter books in the curriculum of Languages and Literature.
"Harry Potter's Saga by J.K. Rowling, Lord of the Rings Trilogy by J.R.R. Tolkien, and many others, give the chance to teach and learn Literature in a complete different way. The final result is always the best! And the list is enormous!"

And it's true, too! Students are inventive! I do remember the first digital generation that I called the 'Harry Potter Gen' (2000-2002). I had the very first readers of Harry Potter  first book - Harry Potter and the Philosopher Stone in  my classroom.


Rowling managed to get a large swath of young people reading books at a time when it looked as though they weren't going to be reading anything.
Students (12-15 years) in my school, a high junior school, read 'compulsively' Harry Potter books, they went to the cinema watch the last movies of Harry Potter and they created fantastic projects in my lessons Languages & literature (native language, foreign language). 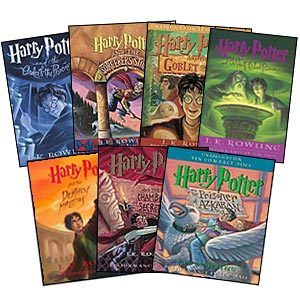 They were so inventive and contagious that I have been a fan myself, reading the books in the classroom and creating new 'different' activities online for the first time to support my curriculum in school, on this level of teaching and learning.
My students were the first "Digital Gen" working and learning online, in Portugal (2001-2002). I teach blended learning since this very moment.

I think it was one of first 'movement' in Secondary education perhaps in the European countries. I'm almost sure! Some European educational networks as My European School and EduFLE.net published my website (2002) and my educational blogs (2005).

The website Kidzlearn Lugares & Aprendizagens was distinguished at the final  of Global Junior Challenges (up-to 15), Rome 2004. 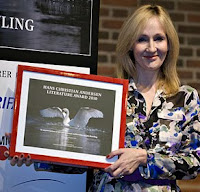 JK Rowling
Photo: Kim Rune, Fyens Stiftstidende | AP 2010
The importance of JK Rowling as a writer was recognized when she winned the new Danish award, the "Hans Christian Andersen literature prize", in 2010. His work was of that rare order that seems to transcend authorship," and praising Andersen's "indestructible, eternal characters."

The new prize is distinct from the Hans Christian Andersen medal, sometimes dubbed the "Nobel Prize for children's literature".


For me, the important side of pottermore.com is that: It brings the students  on a free and collaborative digital reading!


"This site is a fantastic way for fan creativity to continue. It's amazing for me to be creative in this medium, which didn't exist back in 1990."

Rowling's explanation of it is vague. However, if it somehow involves immersing the students in the stories digitally, then I am very glad.

The Pottermore website will not open officially until October. Fans can return to the website on July 31 wich coincides with Potter's birthday in the books and follow the  owls over the ensuing months...
"So I'd like to take this opportunity to say thank you, because no author could have asked for a more wonderful, diverse and loyal readership."

Reading Harry Potter on web 2.0 ? by G-Souto is licensed under a Creative Commons Attribution-NonCommercial-ShareAlike 3.0 Unported License.
Posted by G-Souto at 6:18 PM