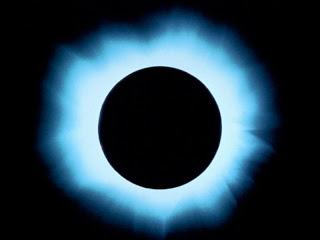 The moon will rise in Earth's shadow this evening in a rare lunar eclipse that could turn our natural satellite a deep shade of red.

With clear skies, the celestial spectacle will be visible across many countries, as soon as the moon rises after sunset.


"A total lunar eclipse happens when the moon, Earth and sun line up, and our home planet casts a vast shadow that engulfs the moon.

When the moon moves into the darkest part of the Earth's shadow, the umbra, it will turn a slate grey or brick red colour.

The moon changes colour because blue light - and other short wavelengths - scatter more in the Earth's atmosphere, with more red light getting through."

The eclipse, if visible, could be a spectacular opportunity for photographers and skywatchers.

The moon will remain low in the night sky, so observers will need a clear horizon and cloudless skies to see it well. Unlike solar eclipses, a lunar eclipse is safe to watch with the naked eye.

The event will be visible in Australasia, southern Japan, a large area of Asia, India, Africa, Europe and the eastern part of South America.

The Observatório Português de Astronomia, in Lisbon, will open the doors at 20:30. Several telescopes and other tools for observation will be available for those who want to observe the total eclipse of the moon while the astronomers will explain the conditions under wich eclipse occur.

The total eclipse ends at 22.03pm, when the Moon starts to leave the darkest part of the umbra.

In the final stage of the eclipse, the moon moves into the lighter part of Earth's shadow, the penumbra, and will likely take on a yellowish hue.

The students can be invited to join astronomers and skywatchers at national observaries of Astronomy, observing the lunar eclipse and making some photos or little videos with their smartphones to explore in Science classroom.

An open debate on the subject with colleagues and tutoring by educators will be  an interesting course for all.

The best photo or video should be voted by students.