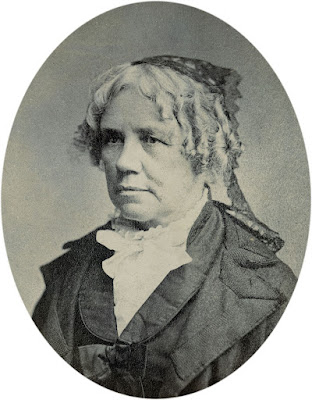 Maria Mitchell
Nantucket Historical Association
“We especially need imagination in science. It is not all mathematics, nor all logic, but it is somewhat beauty and poetry.”
Maria Mitchell

Maria Mitchel was the first woman in the United States to become a professional astronomer, and a dauntless champion of science education for women. Maria Mitchell, whose bicentenary was celebrated August 2018, was a scientific revolutionary.
She was born on this day, 1st August 1818, into a large Quaker family on the island whaling station of Nantucket, off the Massachusetts coast.
A champion of women’s education and civil rights, Mitchell reached worldwide celebrity by the time she was forty. What catapulted her into scientific fame, however, was her discovery of  a comet known today as 'Miss Mitchell’s Comet'.

Google Doodle Maria Mitchell´s 195th Birthday (2013)
doodler: Jennifer Hom
https://www.google.com/doodles/
Google honored Maria Mitchell, the first American woman who worked as a professional astronomer, with a Doodle to celebrate what would be her 195th birthday (2013).
The Doodle portrayed Mitchell atop the bank, peering through a telescope into the night sky. To the right in the scene below is an observatory and off in the corner is her house. 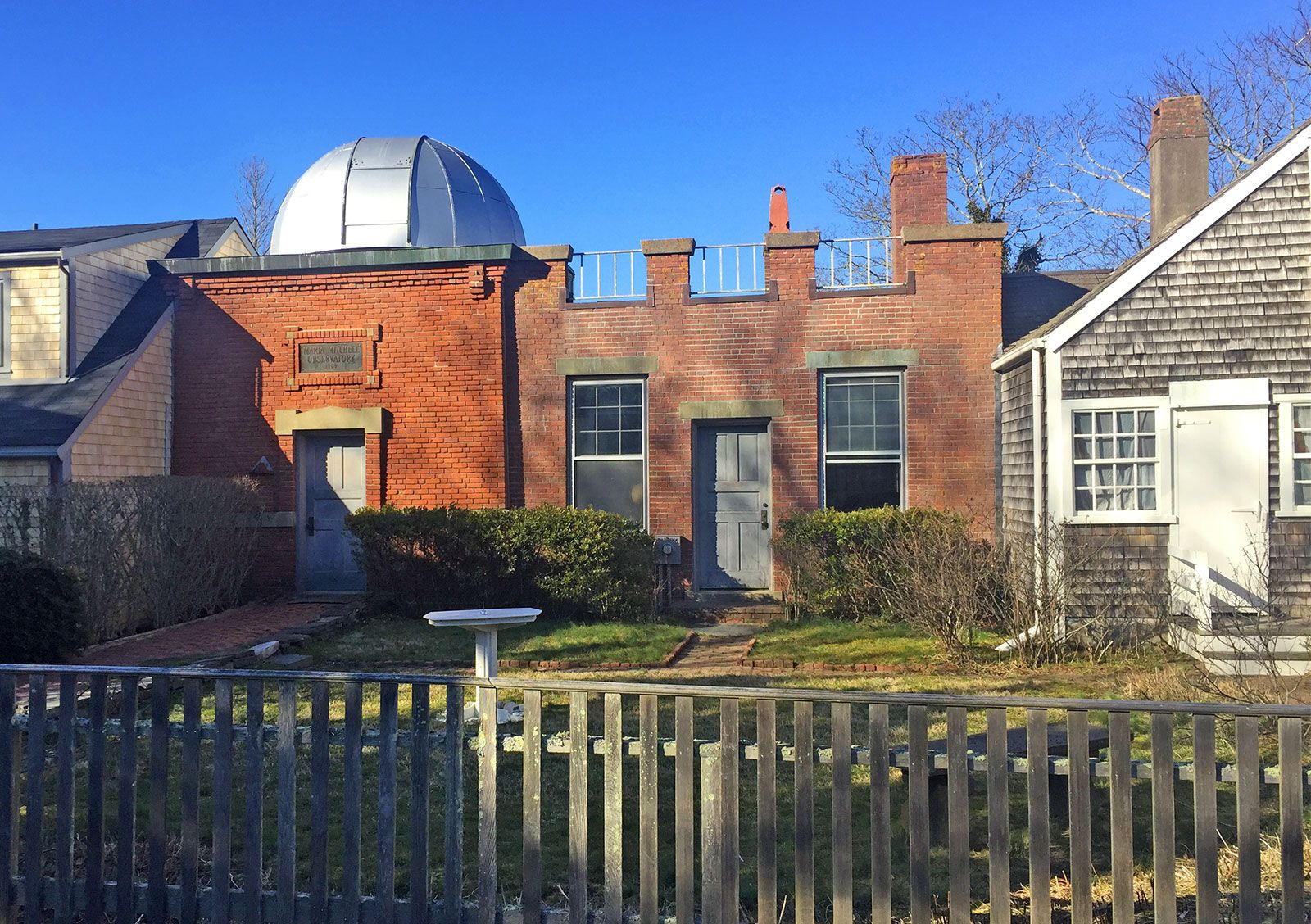 Vestal Street Observatory
Nantucket, Massachusetts
credits: © Monique Parsons
In October 1847, Mitchell succeeded in establishing the orbit of a new comet, which became known as “Miss Mitchell’s Comet.” The discovery gained her immediate recognition in scientific circles; the following year she became the first woman elected to the American Academy of Arts and Sciences.
Her discovery of a telescopic comet on the evening of October 1, 1847 brought her worldwide fame and a gold medal from the King of Denmark. She was the first American and first woman to receive this honor.

“Not in vain do we watch the setting and the rising of the stars.” 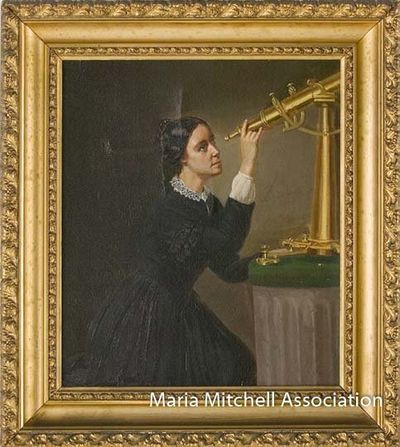 Maria Mitchell Museum
credits: Maria Mitchell Association
Together they scanned the skies using a Dollond telescope from the rooftop ‘walk’ of their house. Early on, Mitchell revealed extraordinary observational powers, natural mathematical gifts and unusual sensitivity to stellar movements and colours.
From 1836 to 1856 she worked as a librarian in the Nantucket Atheneum during the day (often acting as an informal teacher) and became a regular observer of the skies at night. 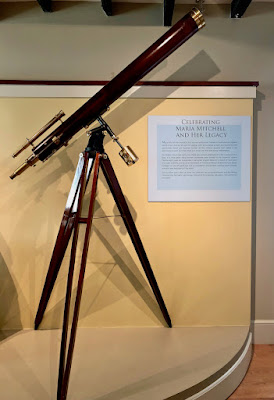 Celebrating Maria Mitchell and her legacy
Henry Fitz telescope
National Museum of American History, Washington DC.
In October 1847 Mitchell succeeded in establishing the orbit of a new comet, which became known as “Miss Mitchell’s Comet.” The discovery gained her immediate recognition in scientific circle.
The following year she became the first woman elected to the American Academy of Arts and Sciences. In 1849 she was appointed a computer for the American Ephemeris and Nautical Almanac, and the next year she was elected to the American Association for the Advancement of Science. 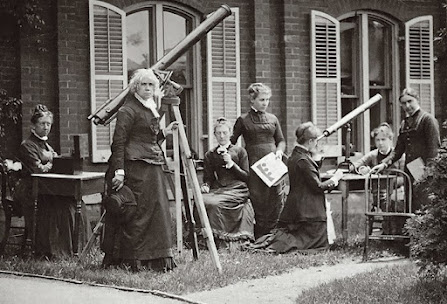 Maria Mitchell and her students
credits: Archives & Special Coll., Vassar College Lib.
https://www.nature.com/
While she was an acclaimed astronomer, as well as librarian and naturalist, Maria Mitchell was, perhaps most importantly, an educator and an inspiration to all women striving to achieve more. When Matthew Vassar founded Vassar College in 1861 as the first American college exclusively for women, Maria Mitchell was the first, and only female, professor he hired, making her also the first female professor of astronomy in the United States – especially amazing since her formal education ended at 16 – beyond which she was self taught.
In 1873, she helped found the American Association for the Advancement of Women (precursor of the General Federation of Women’s Clubs) to promote higher education and professional opportunities for women. 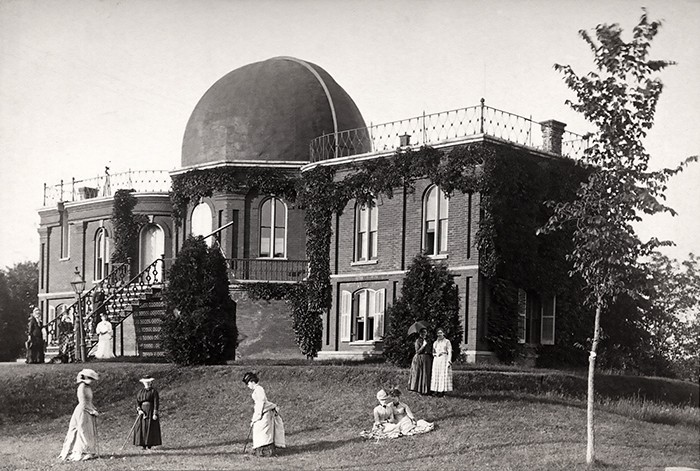 Students in the grounds of Vassar College’s old observatory in 1879
Credit: ID 08.06.08, Archives & Special Coll., Vassar College Lib.
https://www.nature.com/
Education:
Maria Mitchell is an inspirational scientist and pedagogue for girls to study science. Promoting the work of women in science and encouraging girls to enter the sciences is important for achieving the Global Goals for Sustainable Development.
The gap of girls and young women in Science in the 21st century is still a big problem. We must  motivate the young girls to pursuit Science studies.
Girls do as well as boys in science and maths at school but many more boys go on to further study science, technology and engineering. 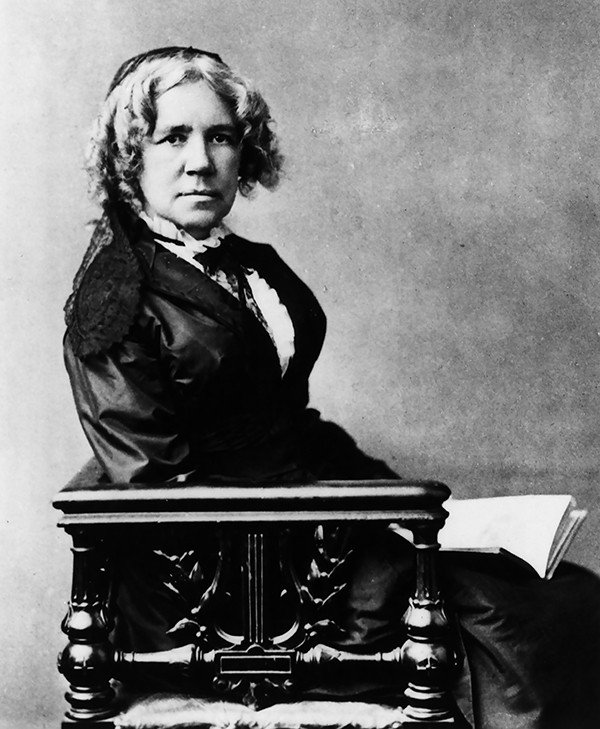 Maria Mitchell
credits: Bettman/Getty
via nature.com
Mitchell as a pedagogue believed in 'learning by doing', and in the capacity of women to achieve what their male counterparts could. Maria Mitchell argued for women’s education.
Maria Mitchell was beloved by her students whom she taught until her retirement, due to failing health, in 1888. She died in June 1889 in Lynn, Massachusetts.
Resources: Useful links
Maria Mitchell Museum (teachers & students)
https://www.mariamitchell.org/for-students-and-teachers
Maria Mitchell at 200 : a pioneering astronomer who fought for women in science
https://www.nature.com/articles/d41586-018-05458-6 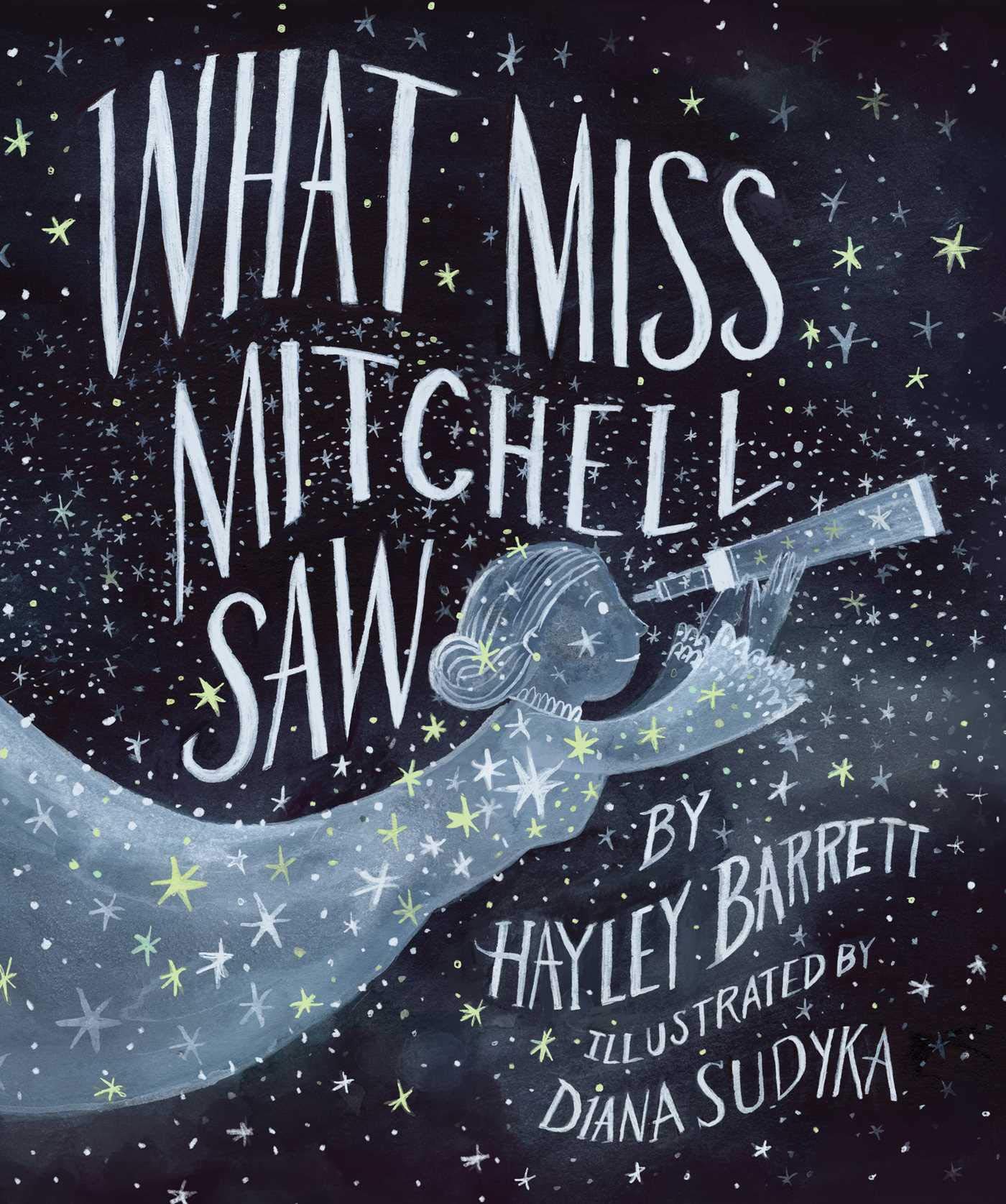 What Miss Mitchell Saw
Hayley Barrett
illustrated by Diana Sudyka
https://www.amazon.com/
Children's book:
Every evening, from the time she was a child, Maria Mitchell stood on her rooftop with her telescope and swept the sky. And then one night she saw something unusual—a comet no one had ever seen before! Miss Mitchell’s extraordinary discovery made her famous the world over and paved the way for her to become America’s first professional female astronomer.

What Miss Mitchell Saw
Hayley Barrett
illustrated by Diana Sudyka
https://www.amazon.com/
Miss Mitchell’s extraordinary discovery made her famous the world over and paved the way for her to become America’s first professional female astronomer.
Gorgeously illustrated by Diana Sudyka, this moving picture book about a girl from humble beginnings who became a star in the field of astronomy is sure to inspire budding young girls scientists everywhere. 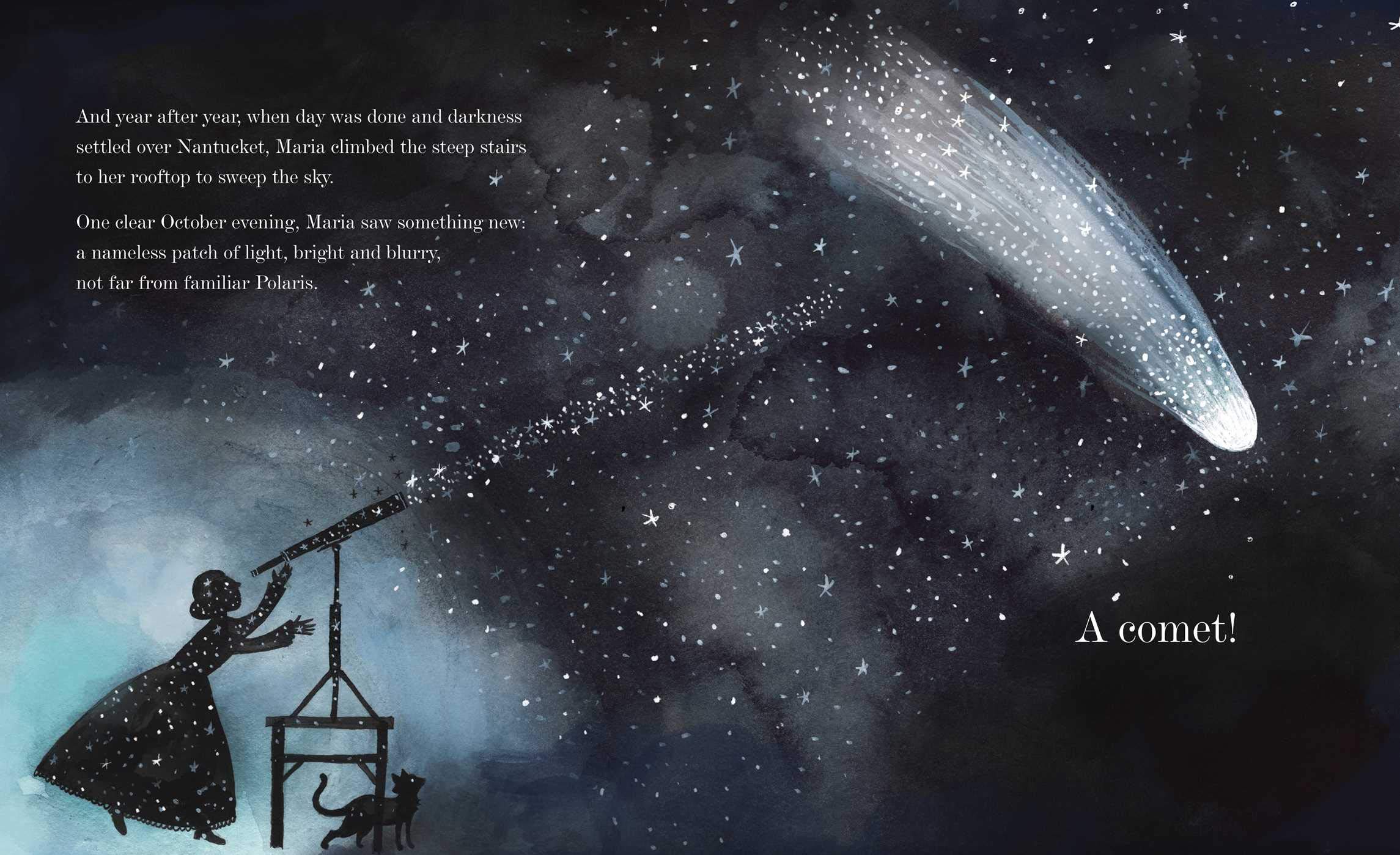 What Miss Mitchell Saw tells the story of Maria Mitchell, the American astronomer, educator, and activist. With the help of her father, Maria learned how to use a telescope.

Maria found herself captivated by the beauty of the night sky. It became a routine for Maria to “sweep the sky.” She knew everything by name. The stars, the planets, and celestial phenomena.
I think What Miss Mitchell Saw is a lovely nonfiction picture book for children to read, and it certainly tells an inspiring story about a female pioneer.

Above all, Maria Mitchell argued that higher education alone would give women independence of mind and drive:

“Until women throw off this reverence for [male] authority they will not develop. When they do this, when they come to truth through their investigations ... their minds will work on and on, unfettered.”

Education : Women in Science : Maria Mitchell the 1st Woman Astronomer by G-Souto is licensed under a Creative Commons Attribution-NonCommercial-NoDerivatives 4.0 International License.
Posted by G-Souto at 11:27 AM