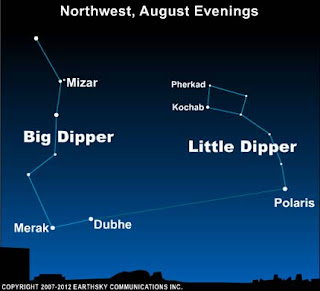 Tomorrow night, looking to the sky, two outer stars in the bowl of the Big Dipper : Dubhe and Merak. They always point to Polaris, the North Star.
How to find the Big Dipper?
To find the Dipper at this time of year, look toward the northwest in the evening. Once you’ve found it, after locating Polaris, look carefully at the second star from the end of the Big Dipper’s handle. 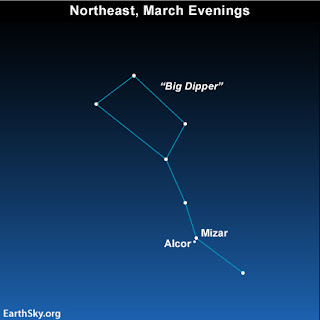 credits: EarthSky.org
http://en.es-static.us/
If your sky is dark enough, and your eyesight is good, you’ll see that this star, Mizar, has a nearby companion, called Alcor.
To know more:
Arabian stargazers called Mizar and Alcor the “horse and rider.” These stars are a good test of the night’s viewing conditions: if you can’t see Alcor, there might be some clouds.
These two stars are what’s called “naked-eye double star,” appearing double from our earthly vantage point. But do they orbit each other? Astronomers aren’t sure. The distances to these stars (as to most stars) aren’t precisely known. 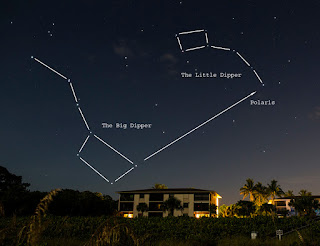 If they do lie at the same distance from Earth, their separation is 0.27 light-years, that’s in contrast to eight light-minutes for Earth’s distance from our sun or several light-hours for the distance to our sun of the most distant worlds in our solar system.
Still, it’s possible that Mizar and Alcor could be this far apart and still be orbiting one another, with a very long orbital period of three-quarters of a million years.
Mizar and its fainter companion star Alcor are one of the most famous double stars in the sky. You’ll spot Mizar first, as the middle star of the Big Dipper’s handle. Look closely, and you’ll see Alcor right next to Mizar.

Mizar and Alcor are one of the most famous double stars in the sky. You can spot them easily in the handle of the Big Dipper. Mizar is really four stars, and Alcor is really two stars. So what we see as two stars are really six in one! 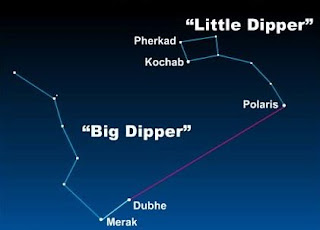 The 3 August, 2016, we might (not sure) catch the moon and Venus says Bruce McClure of EarthSky.

But now we talking about the Big Dipper and Little Dipper for tomorrow night.
Of course most of us are enjoying summer break, teachers and students. But for schools in much of the world the beginning of August means that school will be starting soon.

In my country, school will be starting in September.

However students will be sky watchers if they are at summer camps. And they will be excited to catch the Big Dipper and Little Dipper.

As teachers start to think about the resources that they might use in their classroom this year, science teachers can snap some amazing videos to explain the Big Dipper and Little Dipper in one of your lessons, after school summer holiday... if they are lucky.

This year, last May, I worte about the Eta Aquarid Meteor shower.