Education & disability : Francesca Jones, the power of a dream 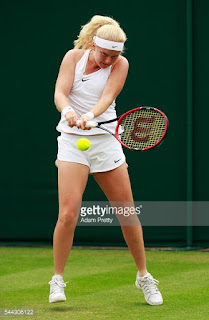 Francesca Jones, fifteen-year-old, got through the first round at Junior Wimbledon 2016 despite a rare condition that has left her without all her fingers and toes.

Francesca Jones was born with ectrodactyly ectodermal dysplasia syndrome – a rare condition that causes development problems with hands and feet.
Despite leaving her with an abnormally small right hand – her racket hand – and fewer fingers and toes than is usual, she has not allowed her condition to prevent her reaching her first junior grand slam tournament.

"I have three toes on my right foot, which is obviously my dominant foot, so balance had always been a weakness of mine. As I matured, as I got older, I have just worked on that, day in, day out.”

But that has not stopped the determined teenager from reaching the second round of her first junior Grand Slam tournament or being ranked "number four" in the world when she was under-14. 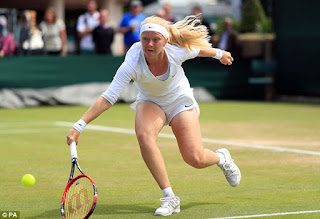 Francesca Jones/ ©PA credits
http://i.dailymail.co.uk/
Francesca got to Wimbledon following three operations on her wrists in the last year alone and, although she was beaten in her second round match by American teenager Kayla Day, she remains in the doubles.

She battled her way to Junior Wimbledon despite having just three fingers and a thumb on each hand has described her determination to succeed in the game.

Ectrodactyly Ectodermal Dysplasia is caused by a mutated gene, and Jones has had three operations this year alone.
"If I have to do the operations again, I'll do them again," (...) "Everything's mental and everything's work, so if you keep at it then eventually it's going to work out for you."
Francesca Jones
Francesca Jones who has battled her way to Junior Wimbledon despite having just three fingers and a thumb on each hand has described her determination to succeed in the game. 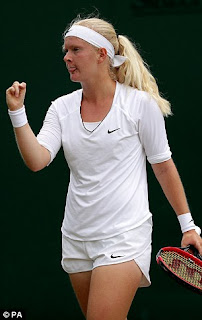 "I’m 100% into doing this and giving it everything to get to where I want to be in the world.”

Having EEC syndrome, making her rise up the junior rankings even more impressive.

Children with special disabilities can be exceptional athletes. Francesca Jones is wonderful exemple to talk with your 'special' students.

One of the most important curriculum is Sports. Kids with disabilities might have wonderful performances. They are enthusiastic because they can participate at big sports event - Wimbledon or Special Olympic Games - feeling their great effort to beat their handicap difficulties.

A victory at Junior Wimbledon is just the the best that Francesca Jones deserves for her courage and hard work.  She could realize her potential for growth.

Educators (teachers and parents) have a crucial role helping the integration of children with disabilities in all kind of activities when they have a dream.

“People say that I can’t grip the racket properly and I get called names. I don’t take much notice of it, but again it is using it as a positive. If people can see that I am where I am now and hopefully where I will be in the future with my condition then I am proving a point that I have always wanted to.”

Wow! You deserve the sky! Sky is the limit to a girl like you. Congratulations!

Education & disability : Francesca Jones, the power of a dream by G-Souto is licensed under a Creative Commons Attribution-NonCommercial-NoDerivatives 4.0 International License.