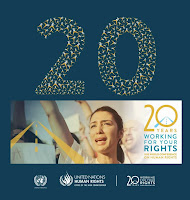 "As we commemorate the 20th anniversary of the Vienna Declaration and Programme of Action, let us intensify our efforts to fulfill our collective responsibility to promote and protect the rights and dignity of all people everywhere."

The UN General Assembly proclaimed 10 December as Human Rights Day in 1950, to bring to the attention ‘of the peoples of the world’ the Universal Declaration of Human Rights as the common standard of achievement for all peoples and all nations.

In 2013, the Office of the UN High Commissioner for Human Rights marks 20 years since its establishment.

The United Nations General Assembly created the mandate of High Commissioner for the promotion and protection of all human rights in December 1993. The General Assembly was acting on a recommendation from delegates to the World Conference on Human Rights held in Vienna earlier the same year.

http://en.unesco.org/
"To realise freedom and equality in dignity and rights for all women and men, we must do everything to support countries in meeting the Millennium Development Goals by 2015."
Irina Bokova, UNESCO Director-General

This year’s theme will focus on "inclusion and the right to participation in public life."
"The open and global network offers you that chance to be a part of public matters and provides a platform for you to help influence the decisions that shape your communities.
It has given a voice to the voiceless, pushed the boundaries of human innovation, built new communities, and helped them flourish in a way that was previously unimagined."

http://www.ihrb.org/
This year we have a chance to celebrate the Internet as a tool that’s helped enable universal rights such as freedom of opinion and expression, to peaceful assembly and association, and to take part in the conduct of public affairs (articles 19, 20 and 21 of the Universal Declaration of Human Rights) 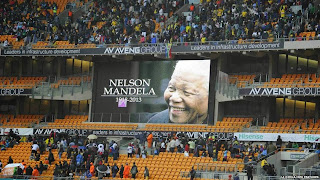 "We give thanks for his life, his leadership, his devotion to humanity and humanitarian causes."

Education should encompass values such as peace, non-discrimination, equality, justice, non-violence, tolerance and respect for human dignity.
Quality education based on a human rights approach means that rights are implemented throughout the whole education system and in all learning environments.
All schools and other educational institutions make a special effort to inform children of their rights according to the Declaration of the Rights of the Child and the Convention on the Rights of the Child.

Credits: OECD
http://i0.wp.com/
Teachers have a crucial role on the alert of poverty or child labour cases among their students.

In our days, teachers help students draw attention to situations like students living below poverty line in their own schools, or countries.

Let us draw inspiration from some good actions to strengthen respect for human rights to children and young people.

The United Nations Human Rights office is organizing a Google+ Hangout on the 12th December, at 4:00pm until 4:30pm in UTC+01 to discuss child rights, access to justice for children and the new Optional Protocol to the Convention on the rights of the Child on a Communications Procedure.

The Google+ Hangout will be moderated by James Heenan, the Chief of the Human Rights Treaties Division at the UN Human Rights Office (OHCHR).

Take part in the conversation via:
Send your questions to the participants using hashtag #Justice4Kids.

"Nelson Mandela changed the world and made it a better place. He taught us all a lesson on the power of peace and  reconciliation;  the importance of forgiveness and respect for the dignity of each and every human being."

Human Rights Day at school by G-Souto is licensed under a Creative Commons Attribution-NonCommercial-ShareAlike 3.0 Unported License.