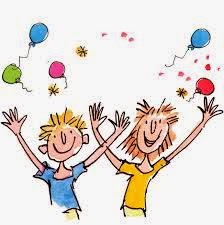 Today is "International Children's Day" in many countries!

The World Conference for the Well-being of Children in Geneva, Switzerland, proclaimed June 1st to be International Children's Day in 1925.

However, other countries hold events on different dates, such as the fourth Wednesday in October (Australia) and November 14 (India).

Universal Children's Day is not observed in the United States, although a similar observance, National Child's Day, is held on the first Sunday in June.

In Portugal and many other countries, June 1st is International Children's Day. You can see the honoring children day in many places all around the world here.

Children's Day is usually marked with speeches on children's rights and wellbeing, and other events involving or dedicated to children.

"As debates rage on austerity measures and social spending cuts, a new report reveals the extent of child poverty and child deprivation in the world’s advanced economies.

Every year, we write and show pictures about poverty in underdeveloped countries. But a new reality appears. Poverty among children in 'developed' countries.

Reading this report and watching the video, on this day, as an educator, I must write about the new poverty among our students in our schools, in our countries.

What’s it like to live in poverty in a wealthy or 'developed' country?

Pupils from a school in Scotland in the UK made this amazing film to answer the question themselves and raise awareness of child poverty in the United Kingdom.

Students want to raise awareness of child poverty in their country and among their colleagues and friends. Many children in the United Kingdom live in poverty, but what does it actually mean day to day? One young student living below the poverty line tell us.

I salute the courage of David and all the young students in the film by exposing their reality day to day.

They expose about a reality that is not only in the United Kingdom. Several other 'developed' countries are facing the same problem. So many young students are facing this terrible problem in so many countries!

"There is no overall ranking of one country against another, rather performance on a number of measures is compared."

Teachers in their own countries have a crucial role on the alert of poverty cases among their students.

Teachers stimulate their pupils to think about the differences between themselves and others and explain the idea of "rights".
In countries where the rights of children are generally well-respected, teachers may draw attention to situations in countries where this is not the case.

Nowadays, teachers help students draw attention to situations like students living below poverty line in their schools, or countries.

We can hold events in school as St Kentigern's school, we can stimulate interest in the media around us or to start nationwide campaigns fighting the injustice of poverty among our students.

What do you think children need to have a good standard of living?

A good education and to be loved!

For the years to come, it is a pointer to the well-being and cohesion of society as a whole. Raising against poverty among chidren!

News | Tens of millions of children living in poverty in the world’s richest countries
http://www.unicef.org/media/media_62521.html
Child Poverty at a time of crisis | Innocenti Research Centre
http://www.unicef-irc.org/

Children's Day around the world
http://en.wikipedia.org/wiki/Children's_Day
Posted by G-Souto at 3:38 PM